Doctor Who: Mummy On The Orient Express 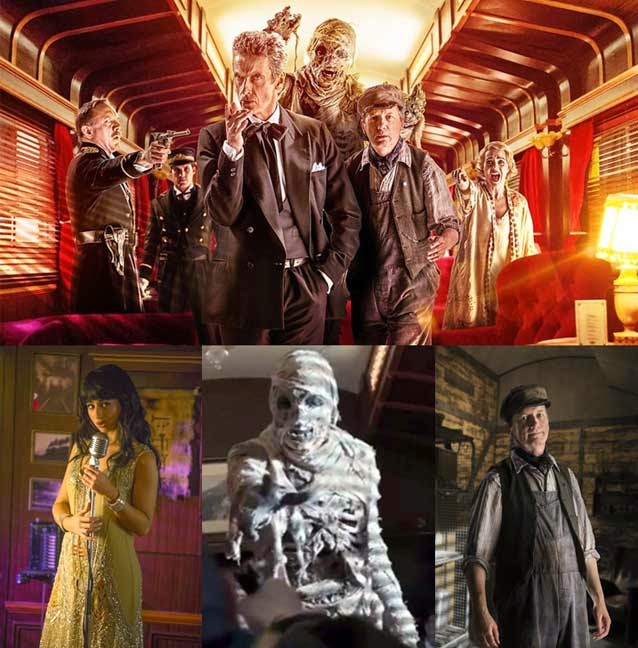 This episode is probably the best one I’ve had the pleasure to watch this season which, given my fairly negative comments on the majority of the current series so far, might not seem like much of a comment but all I can say to that is... when Doctor Who is good, it’s really good... and this was great Doctor Who.

Mummy On The Orient Express jump starts with the Doctor and Clara arriving on a perfect... almost perfect... replica of the Orient Express running through space. It’s their kinda farewell trip after Clare’s revelation of leaving The Doctor last week and I still find it hard that, for someone who has been around for every incarnation of The Doctor (Yeah, remember that stuff? It was only last season.) that she is still in the least surprised by any twist of his character that comes to light. However, this all seems to be frequently forgotten and the dialogue here is based on this being their last hoorah and it works really well as an extended audience tease while giving the interplay between the characters a slightly different tone to riff around.

And then the screaming starts. Well, it started in the pre-credits actually but it starts up again soon enough with a really ingenious nod to the artistry of the old school monster, B-movie style gimmick. There’s a mummy loose on the train at various intervals who can only be seen by his victims before it kills them... and only for exactly 66 seconds. Now here’s the thing... not only is the 66 seconds thing a neat little device to create suspense in the audience but it allows the makers of this episode the chance to indulge in a bit of old William Castle style chicanery. You know those old gimmicks in movies where the film would stop and you’d have “one minute to guess the identity of the werewolf” or “30 seconds to guess the name of the killer” etc... well they’ve done a similar bit of jiggery pokery here by putting up a stop watch countdown every time the mummy appears... so you know when it starts ticking down The Doctor only has that long to beat it each time. It works really well too... lending itself to the style and format of this particular Doctor Who adventure and fitting the spirit of it like a well worn glove.

Now, in among all my negative comments I’ve made over the last few weeks about the general lack of good story writing (as opposed to ideas) there have been a fair few positive comments too, focussing on the fact that I think Peter Capaldi is brilliant as The Doctor, Jenna Coleman’s Clara is as cool n’ groovy as she ever was and, of course, that the dialogue and chemistry between them has been excellent. All that, and it kinda goes without saying, also applies to this weeks episode as well but, here you also have a story that works too... simplistic in some ways but with a tough enough edge that The Doctor has to work stuff out and we get to see him doing it... less quicker than he’d like.

Luckily he has a new friend in the form of an engineer, played by Frank Skinner (no, not the famous soundtrack composer... some kind of modern comedian, apparently) and the scriptwriters have gifted him with enough Shakespearean “lowest character is actually the smartest one in the room” kind of intelligence that he’s able to assist The Doctor very well for most of the episode... which is fine because Clara is trapped in another compartment of the train for the majority of it. Not that she doesn’t do some very capable “assisting” of her own, it has to be said.

All this means that we have a story which is well put together, has fantastic dialogue and also has a genuine problem solving focus as we get to watch The Doctor use each new fact as it is uncovered to finally work things out so that when he finally fixes it so that he’s the one who can see the mummy... he knows just what to do. And, frankly, the little detail which vanquishes the “monster of the week” in this one is a really neat little touch, I have to say. Didn’t quite see it coming but am blaming the unusual grooviness of the episode as a distraction to my own mental cognisance on this occasion. And it was brilliant. If they can keep up the writing on this level for the rest of the season then we’re in for a good second half. I don’t believe that for a minute given the up and downess of the show lately but, hey, what the heck. This episode has certainly reminded me that the ups are often worth putting up with a number of downs for. The only real thing I’m missing now from the show is a strong sub-theme for the Capaldi era from Murray Gold. Tennant and Smith both had a very strong, slightly different, action melody... Capaldi doesn’t really seem to have one yet and that’s something the show is sorely missing at this point I think.

So, anyway... looking forward to the next episode even more now. Mummy On The Orient Express... brilliant Doctor, brilliant Clara, brilliant episode. Definitely, as I said at the start, the best of the Capaldi episodes so far and a real fan pleaser for lovers of the fourth Doctor too, I suspect, who Capaldi seems to be channeling a little in this one.
Posted by NUTS4R2 at 15:20