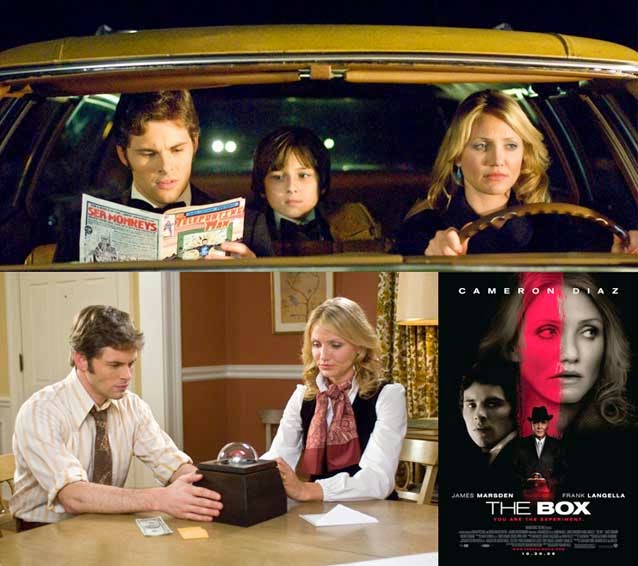 Warning: Spoilers for the source novel and previous TV adaptation.

The Box is a movie that I meant to see at the cinema at the time of its release due to the intriguing premise presented in the trailer. Unfortunately, I don’t think it played around my local cinema long enough for me to be able to physically get there while it was on but a cheap, second hand Blu Ray made its way into my possession recently and so... here we are.

The premise, which had so intrigued from the trailer and which, I might add, doesn’t even begin to give you the true flavour of this movie, is very simple and it’s based on a short story called Button, Button. This was written by famous science fiction writer Richard Matheson (The Incredible Shrinking Man, I Am Legend) and it’s now been filmed twice, once here and once as one of the 1980s run of new Twilight Zone episodes. However, by all accounts, all three versions differ somewhat and so I feel it’s okay to give away the endings of those first two versions here in order to talk about the way this movie makes use of Matheson’s material and the way the director, very much an auteur after his breakthrough hit Donnie Darko, has chosen to extend the premise beyond Matheson’s original source.

The central hook of all three is a parcel which arrives one morning at the front door of a husband and wife. They open it to find a box with a button under a glass dome and a note that Mr. Steward will be coming to see them at 5pm. When Mr. Steward does arrive, he has with him an envelope which holds the key to release the dome with the button. He tells them that they have 24 hours to choose to use the key to open the glass dome and press the button. If they choose to press the button, two things will happen. Number one is that someone they don’t know will die. Number two is that, when Mr. Steward comes to retrieve and reset the box the next day, he will bring with him a million dollars in cash, tax free. So there’s your moral dilemma right there... do you ease the pain and struggle of your life with a big cash injection and not care that someone you don’t know will die for it?

Now, of course, this wouldn’t be a story unless somebody presses the button and the wife in each case does so. Now this is where the short story and the Twilight Zone episode apparently differ in their conclusion and, I have to admit, I kinda prefer the Twilight Zone ending myself, although Matheson himself apparently didn’t like it so much.

In the original story, the wife has pressed the button and her husband is found dead on train tracks. Mr. Steward’s words to the wife are something along the lines of... “Do you ever really know your husband?” In the Twilight Zone episode the husband is fine but, as Mr. Steward leaves the couple to reset the box and pass it on, he makes the point that he will, of course, be passing it on to someone who, he assures them... doesn’t know them.

Now for me the implied threat of that version is much stronger and, in fact, it’s the option that Richard Kelly goes for in this movie but, the thing is, we get to this point fairly quickly in the running time, it has to be said. Probably no later than half way through the film. What the director/writer then does is take the premise further and start exploring both the reasons why such an interesting proposition has taken place in the first place and also what the aftermath is for the various people who find themselves unwillingly participating in this deadly game.

Now, a strong opener like that was probably better off with no meaning behind it because, after the initial trauma of the idea, nothing you say is going to explain it adequately enough to match the simplicity of the initial proposition. I’m sure Richard Matheson understood this and I’m guessing so did Richard Kelly. However, it does give Kelly a chance to explore what could possibly happen next and, I really don’t want to give away too much here except to say...

The film does get a whole lot bleaker as the narrative continues on towards the ending. This is not a feel good film and the intensity and dark places that it goes to reminded me, at least in terms of atmosphere and the kind of way in which the nagging claustrophobia of the main protagonists’ daily milieu is presented on screen, of Alex Proyas’ Dark City. Fans of that movie wil probably like the trip that this director takes them on here.

Like I said, I don’t want to put any spoilers into play here but there is a certain significance in the fact that Cameron Diaz’ character Norma is married to James Marsden’s character Arthur, who is part of NASA and worked on a project involving a probe which was sent to Mars. They, like many families inadvertently taking part in this chain of events, have a young child. There is a lot of conspiracy happening in this movie and, like the old TV show The Invaders, there’s also a tell for the audience, and the central characters, as to whether or not someone in the movie is already taking part in this particular “programme”.

What I will say is that, if you’re expecting a movie which is a set up to a thriller with an upbeat sense of closure, then you’re in the wrong genre. It’s both more and, to some people, probably less. This is a science fiction film, it turns out, and it’s very much tapped in to the old school 1950s style sci-fi movies and this one comes across as almost a mish mash of The Day The Earth Stood Still and Invasion Of The Body Snatchers, in some respects. It takes the initial concept and takes it into new areas and, near the end, to a new moral decision on the part of the one of the characters. A decision that we realise, at this point, has been asked of people a lot of times before the involvement of Norma and Arthur.

In some ways I can understand why The Box apparently bombed at the box office. I do think, however, that this movie has got a lot going for it and fans of science fiction will really enjoy it. There are a few nice genre nods, the perpetual sense of impending bleakness is coolly maintained throughout the running time and it really doesn’t cop out at the end. Certainly, a movie I think is worth a watch and something I feel should have had a lot more success at the time of its release... when it was sold as more of a thriller in the trailer, than as a science fiction/horror movie. Definitely one to watch out for if you’ve not come across it before.