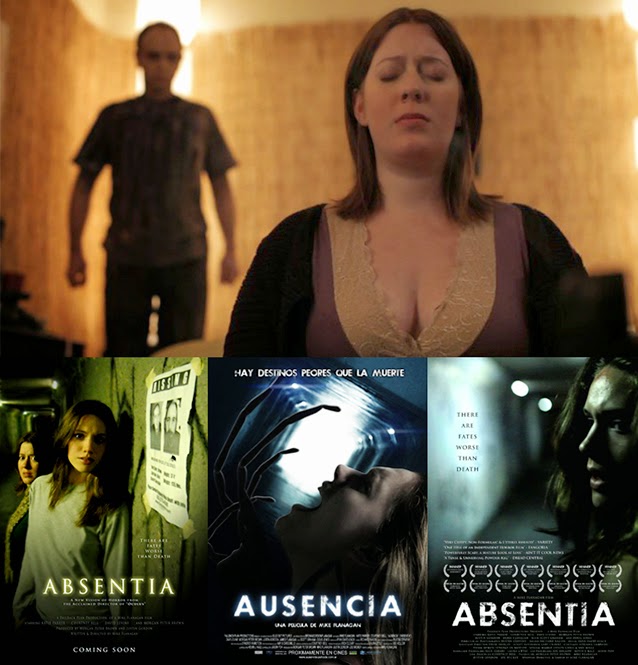 Absentia is a film I watched because, after seeing Oculus (reviewed here) by the same director and being somewhat disappointed by it, one of the people I talk to on Twitter, @screamqueenlauren, told me I should check out this earlier feature as it was a bit of a classic for her. So yeah, I gave it a go, via a cheap blu ray from Fopp, and I’d have to say that she was dead right about one thing... Absentia is a far superior film and it was presumably made on a much lower budget too... since the director partially financed this with kickstarter funding.

Absentia won me over pretty quickly in that it has the look and feel of a typical US independent film. It’s not that it’s not in any way slick because the whole thing is very well put together (for a low budget feature) but it does seem a little rough around the edges at times and that’s what gives the whole thing both its inherent charm and, in certain sequences, gives it something a little different to the standard shock moments of a horror film. This is partially to do with the music too but I’ll get to all that in a minute.

Absentia tells the tale of an ex-drug addict, Callie played by Katie Parker, going to stay with her estranged sister Tricia, as played by Courtney Bell. Tricia is pregnant and has a husband who has been missing for seven years. As the time gets nearer for her to finally get legal closure on his death certificate, she becomes more and more anxious about things and, with a baby on the way, it’s good timing for her sister to come and stay with her. However, the ghost of Daniel, her missing husband, seems to be popping up in her line of vision whenever Tricia, and the audience, is least expecting it. Is he dead and haunting her? Did she murder him and is lying about his strange disappearance? Or is it just as her psychiatrist says... that she’s hallucinating him strongly because of the emotional trauma involving the impending arrival of his death certificate.

Well, the truth is none of these. I don’t want to give too much away about the origins of these problems but I will say that there seem to be two main concerns running around here in the writer/director’s head which are both coming out in the narrative and, while at first the phantom images of the first half of the movie started to make sense, the second half of the movie, when something else happens to confound everyone in the main narrative, is almost at odds with some of the creepier moments in the first half... although it does all kind of fit together when you take a long hard look at it.

The good thing about Absentia feeling like a low budget production is that the acting by the two female leads is top notch, extremely naturalistic and left at longer takes in some sequences than they might have been in a movie where several different takes might have been spliced together to augment the performance. It’s also less melodramatic, both in realistically lethargic acting style and in regards to the scoring of the movie which, if anything, resembles an early Hal Hartley work in its tone. This helps build the atmosphere of lurking dread which starts to manifest in every frame. For instance, “dead/absent Daniel” pops up from behind doors or is revealed in camera movement in close proximity to his wife on a number of occasions and, in a bigger budgeted movie the scoring, which would almost certainly be a lesson in “atonalism versus sound design”, would highlight these moments with musical stings designed to make you jump or shudder. Here, the music rambles in and does its own thing, as does the awesome Courtney Bell in these scenes, and the effect means your gut accepts, credibly, the “supernatural” element on screen before your brain has got accustomed to the fact that you’ve actually seen something and, while both approaches to horror are equally valid, this approach works really well here.

After the casual teasing of the narrative along these lines, and an obsessive amount of visual hints that Callie has got a stash of drugs hidden under her bed (which turns out to be a clichéd way of allowing the other characters to disbelieve her eye witness testimony later), we are then catapulted into a new section of the movie where the tunnel at the end of the street, which has always been treated in the film with a certain amount of sinister attention up to this point, both in the way it is shot and also scored, becomes rather significant to the survival of a number of the characters and is revealed to be a special place in the history of the area where this film is set. Right from the start of the movie we are bombarded with posters of missing people and missing animals and, while the ultimate reason for the multiple animal disappearances in the area is touched on, it would be true to say that all the disappearances in the movie are related to the tunnel and what supernatural mystery dwells within.

By the last third of the running time, this film reveals itself to be firmly in 1950s B-movie territory in terms of the credibility of the explanation for the events that have been unfolding in this small town but, again, because of the low budget, independent feel of the way the material is represented, the director deftly manages to get away with the, well... the silliness... of this story’s primary “monster” and he manages to show just enough of the real, main antagonist to keep your imagination suspending your disbelief for a while. Coupled with the acting style inherent in a production of this small size and you have a really neat trick ending of a movie which brings about an acceptance of its own logic, best found represented in the world of children’s fairy tales, without the overscoring and over dramatic highlights that a lot of big budget Hollywood movies might have brought into play here. In fact, I suspect if there had been a big budget involved in this one then the final explanation of what’s going on in Callie’s new home town would not have been allowed to stay in the mix... which is a shame because there’s something almost Cthulhuian in the final denouement and epilogue of this movie.

And that’s about all I’ve got to say about this one I think. Like I said, it’s a little rough around the edges in terms of production values at times but that doesn’t stop it from packing in a slow and persistent punch to the gut as you get further into the movie. I like that the director has got away with what he has in the form of the antagonistic presence in this one and it’s a film I would recommend to both horror and science-fiction film fans alike. Definitely a strong independent horror film you should take a look at and certainly a lot better than Oculus, I think.
Posted by NUTS4R2 at 13:18