Doctor Who: In The Forest Of The Night 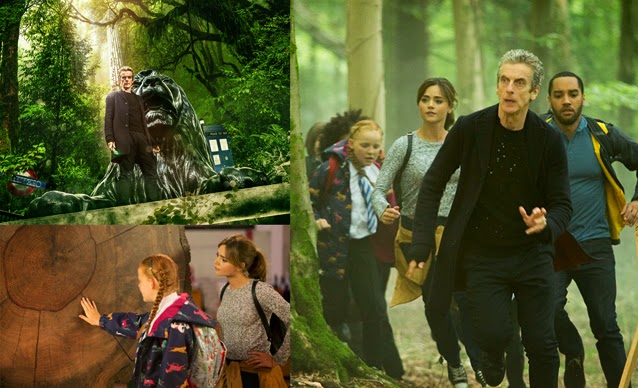 Well this was a very entertaining episode of the current series although, it has to be said, it did at times feel like I was watching an old episode of Grange Hill... what with all those daft school kids in it. Doesn’t mater though because the premise was intriguing and, although this episode suffered from exactly the same kind of lack of regard for science and nature as the horrendous Kill The Moon episode, this one was helped a lot by being quite pacey.

One of the reasons this one didn’t get as dull and sluggish as that aforementioned episode is because we are getting another bit of the whole Clara/Danny Pink dynamic... so we can see how the two of them develop their relationship and, thrown into the mix is, of course, touching on the way that relationship copes with the intrusion of The Doctor into Clara’s everyday life. The tone of it is almost like Clara is having an affair with The Doctor in terms of impact on her earth bound commitments... but it doesn’t quite get into that territory just yet.

The hook of the episode, a forest which grows and covers the entire planet over the course of one night, is intriguing enough as a lead in and works well as a motivator for the actions of the main characters in the story. You’ll probably have realised, right from early on, that the trees would be no threat to anyone and start marvelling at how it took The Doctor so long to recognise that we weren’t in a woody version of the 1950s B-movie The Monolith Monsters and more in the standard territory of benevolent lifeforms helping us out, or at least trying to get along in mutual harmony... which seems to be more of a theme this series than it has in previous years/decades of the show. Would like to see him go up against something really much more deadly soon and, I suspect, I won’t have long to wait for that to happen if the trailer for next week’s episode is anything to go by.

So, yeah, the ending of the episode is a bit of an anticlimax but, not entirely because it is bolstered by the other element of the over reaching story arc which has, shall we say returned rather than been established, this season. One of the school children was sent by the voice of Clara in their head to fetch The Doctor. Although Clara doesn’t admit to this but, as far as we know and despite huge efforts to convince us otherwise, Clara might be some kind of construct... maybe. Actually, I think I’m going to err on the side of caution and say that the mystery of Clara might be both a little murkier and, perhaps, a little more simpler than that... but I’m never right about these things so we shall see what we shall see.

Once again, Missy pops up and shows she’s been watching the entire event... perhaps even through Clara’s eyes. Remember the line about The Doctor hacking Clara’s optic nerve the other week? Well... maybe that was deliberately put there to familiarise us with the concept so we know it when we see it again. Perhaps Missy has hacked Clara in many ways and we are about to find out just how much soon... if she’s a construct then she already knows everything about The Doctor’s various incarnations since Clara was present and an interactive element in every part of his timeline (as shown on the planet Trenzalore) and it’s going to be an interesting denouement if Moffat can pull it off when we get to the very last episode in a couple of weeks time, with the story arc breaking out into the foreground and the inevitable cliffhanger in next week’s episode. Quick thought... if you wanted to get rid of an eye hack, would you pull out your own eye and then grow up to be eye patch woman from the previous seasons? Just a thought.

Other than that... I don’t have much to say about this one, I think. It’s a very short review for me but it was an entertaining episode and, as a cherry topper, it did have some great music from Murray Gold in this one... probably the strongest scoring so far this season. I’m hoping we’ll get to hear it up close and personal when, or frankly if... the rate they’re going, Silva Screen get around to releasing the Series Eight (so called) music on CD. Hopefully they’ll get around to releasing the scores from The Day Of The Doctor and The Time Of The Doctor while they’re at it. But that’s pretty much all I’ve got on this one. Nice episode as a pre-cursor the start of the series finale and... am I the only one who thinks Matt Smith’s Doctor may be putting in another surprise appearance soon? Probably. I always get these things wrong. Time will, as it inevitably always does, tell.