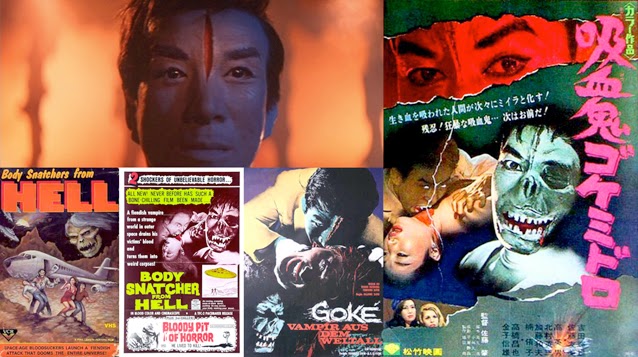 Warning: I’ll be honest, there are some spoilers here,
including the wild ending, but they are such glorious
ones that they’ll probably just make you want to grab
a copy of this movie and have a look for yourself.

Goke, Body Snatcher from Hell, is the second of the four films which make up the Criterion Eclipse boxed set When Horror Came To Shôchiku and, frankly, it’s more than made up for my slight disappointment with the first film in the series, The X From Outer Space (reviewed here) and is easily worth the price of the box set on its own merits.

This one is kind of a mix of styles and genres and has a heck of a lot going for it. One of my more pleasing discoveries of last year, to be sure. That being said, the film is full of terrible dialogue and bad acting, in keeping with a lot of the Japanese mini fantasy epics of the time. Even so, the fact is that this film rises above being more than the sum of it’s cheesy parts by a clear mile and, like the blurb in the liner notes, I’d have to say that it’s not quite like anything I’ve seen before... at least not in terms of this particular blend of elements coming together in one venue.

The film starts off with quite a lengthy pre-credits sequence inside a plane. The discussion among the passengers is about the ‘violence of today’, with acts of terrorism creating a new world of fear which nobody wants to live in. During this pre-credit’s sequence we are introduced to all the stereotypes you would normally get in an airplane disaster movie and, that’s pretty much where the plot seems to be going for a while. You have the boss and his humble employee trying to impress him, the humble employee’s wife who is blatantly having an affair with her husband’s boss, the nervous passenger (who, of course, turns out to be a mad, suicide bomber), the terrorist (no, a different terrorist), the American lady who is flying to pick up her dead husband from the Vietnam war (one of the many aspects of the political issues being pushed throughout the course of the movie) and so on. You also have a couple of scientists or professor types on hand... one who makes himself known when he is needed for expositional dialogue in the plot and another one who only seems to make himself known when the first scientist is dead and is also needed to do the same job. Yeah, I know, it’s full of genuinely sloppy and unintentionally comical writing but, like I said, the film rises above this.

The plane is flying through a red sky like “a sea of blood”, as one character puts it, which is really beautiful and brings to mind the apocalyptic sky effects used in the opening of the 1980 version of Flash Gordon. It has to be said, however, it’s rendered much more beautifully here and it’s at this point that I became aware that the models used (the plane, for example) are made and shot to an absolutely first class degree. This is made even more evident when the plane crashes a little later and is easily the match for some of the better model work used on various kaiju eiga at the time.

As the passengers talk, there are schock punctuations to the discussions as the occasional bloody, flapping bird is seen hurling itself at the windows from inside the plane creating, at least once, a genuine jump scare moment. Another thing used to punctuate this sequence, and the film in general for that matter, is when a flashback to inform a character or idea is introduced. Black and red shots of an assassination which took place before the narrative has started and various shots of war (many of them archival shots) are edited in quick staccato, both visually and on the soundtrack, to create ultra-fast slide shows to help push the points being raised. These are genuinely skillfully done and add another layer of interest to the movie.

At this point, the pilot and his crew are alerted that there is a suspected suicide bomber on the plane.. so they go through everyones luggage with the usual arguments ensuing until they come across a sniper’s rifle in a briefcase. The assassin makes himself known (although he has nothing to do with the suicide bomber, who is undetected at this point) and hijacks the plane, forcing the pilot to change route to Okinawa. After he does this, however, a UFO flies over the nose of the aircraft and the aircraft is left damaged in its wake as an engine bursts into flame. Thus, the plane crashes and the film then becomes a survival movie, with the surviving passengers bickering amongst themselves as tensions increase. This is where the film turns into a less pro-active version of Flight Of the Phoenix for the duration... except a version of it where an alien vampire is on the loose.

The sniper splits away from the group, gets drawn into a landed spaceship and his head is split open in front, to reveal a make up effect like the opening of a vagina on his face throughout the rest of the film. A blobby rock creature slides into the cavity and controls his brain. As we will find out from a similarly possessed lady passenger later in the film (for some reasons the ladies don’t grow a slot on the front of their heads like the male passengers who are ‘possessed’ do), the aliens have landed and they plan to destroy all humanity. However, the way they plan to do this seems to be for the guy they have taken over to get as close as he can to people and bite them in the necks like a vampire, in order to kill them.

This, of course, makes absolutely no sense as an invasion plan but, by this point in the proceedings, I was having way too much fun with this movie to care. Not only does it have a bizarre mix of shoddy B-movie plots and characters so stereotypical that you know what they’re going to say before they do... it does it all in such style. The cinematography, shot design, set design (with some spectacular colours in the alien spaceship, for example, which are like organic shapes forced to adhere to straight angles) and editing are all way too good for what you would normally expect from a film of this calibre and it’s just like sitting down in front of a screen and eating dessert for the duration of the piece. For instance, when the pilot is forced to turn the wheel of the aircraft and change route on the instructions of the hijacker, the camera is tilted so the frame changes to an angle and speed matching the wheel turn. Phenomenal and inventive work going on here.

As the bad aliens make good on their highly impractical invasion plan, going through the passenger manifest one neck at a time and replacing their injured host with a new one as needed, we are treated to one of the most mesmeric B-movies I’ve seen in a long time. Not only that... the special effects are both very effective and highly resourceful, beating out what a lot of American and British studios (such as AIP and Hammer, for example) were doing at the time. For example, when a human host is dead and required to disintegrate, it looks like the special effects team have actually sculptured extremely life-like versions of them out of sand and, as the floor not shown “in camera” is slowly dragged out from under, they crumble and dissolve before your very eyes. This is great stuff and when it looks this good, I can’t work out why this technique hasn’t been used in other films I’ve seen.

As a pièce de résistance, just to top off the film and leave you with a truly apocalyptic finale, the surviving pilot and his air hostess/love interest escape the clutches of the aliens and walk across the desert, not knowing where they are... until they find themselves to be crash landed near a Japanese city after all. As they walk into the city they find that everyone is dead and that the aliens have landed everywhere and killed off, presumably, the entire rest of the population of the planet except for these last two. We pan out from them as we ponder this bleak realisation... out and out and zooming right out until we are left with a shot of the earth. As a final sucker punch, loads of UFOs arrive in space (much like the opening credits sequence of Tim Burton’s Mars Attacks) and then scorch the Earth to a cinder. This is definitely an overkill situation we are in now, in terms of general pessimism, and it’s like the writer wants to make up for man’s inhumanity to fellow man through war and strife by wiping us all off the face of the planet in this movie.

This is all great but it’s also highly questionable, of course, Frankly, why would you want to go to all that trouble of finding human hosts and then biting all their necks like some kind of cosmic vampire if all you needed to do in the first place was to park your fleet in orbit and laser us all to death in a few seconds. This makes no sense people!

It makes no sense, has no logic and is, frankly, one of the most rewarding and unmissable B-movies I have ever seen. I don’t understand why this one is not more well known in this country (nor why it took 11 years after it’s initial Japanese release to get a release in American cinemas, apparently). Goke, Body Snatcher From Hell... who isn’t a body snatcher and is definitely not from hell... is easily one of my most enjoyable movie experiences of last year. A real treat for these jaded eyes and definitely a major reason to splash the cash on the Criterion Eclipse When Horror Came To Shôchiku boxed set of DVDs... I just wish they’d released a Blu Ray edition. I’ll definitely be upgrading to a higher resolution format if one ever becomes available. Truly... miss this one at your vagina-headed peril.
Posted by NUTS4R2 at 19:23