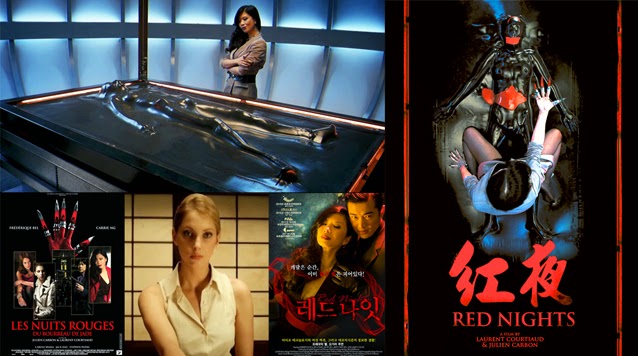 Okay... I think this is going to be one of my shortest reviews ever.

So this was an interesting movie but, perhaps, just a little less than I was expecting from it, overall. I can’t remember which book I’d seen this recommended in but it was on my grab list and so, when the chance to buy a cheap copy came up, I took that opportunity. I’m still undecided as to whether it was a good buy or not, to be honest.

Red Nights is alluded to on the box cover, by one reviewer, as being a kind of blend between an Italian giallo and an espionage thriller and, while that may seem a bit of a facile summation of the content of this film, I can’t help but feel that, in some small way, the essence of this sentiment is indeed correct. There are similarities in the mise en scene of the picture in terms of the general beauty of both the composition and colour schemes found in a lot of gialli over the years... and the simplistic, eye on the prize plot which is attached to it could also seem to be the kind of “one horse” idea found in certain types of espionage thrillers throughout cinema history. But I think, plot-wise, in some ways at least, this conclusion is, perhaps, being just a little too generous.

So let’s look at what we’ve got here.

Well, content-wise, the film opens strongly with a key character, a lead villainess who I thought was called Jade but is, in fact, according to the IMDB, called Carrie Chan. She is played quite confidently and with much poise by Carrie Ng and, here at the start of the film, she is seen eating in a restaurant and consulting with a lady in terms, it would seem, of a dominatrix getting to explore the desires and limits of a new client. The restaurant montage which conveys this and then progresses the woman she is interviewing into her car and back to her place, makes it quite clear that Chan is a dominant character. She then places her new ‘client’ in a rather elaborate and expensively crafted version of a standard fetish vac-bed and gives the lady a quick taste of its power. However, on her second pass with the bed, she seals the breathing holes on the ‘ever so conveniently falling’ latex top sheet (seriously, there’s a lot of ‘aesthetic luck’ and artistic licence going on here folks) with some tape and proceeds to stab her new thrill seeking acquaintance through the abdomen... we get to see the red blood oozing out of the black latex... which is kind of a nice visual and deeply enriched in relation to the colour palette of the sequence (I’ll get on to that in a minute).

After this, we meet another character, Catherine Trinquier played by Frédérique Bel, who is also something of a villainess but, apparently, she’s the good villainess... if you’re happy to sympathise with someone who starts off the film murdering her lover in order to change the terms of a profitable deal and benefit herself. The deal, in this case, involves the location and possession of an artefact which, once broken/unsealed, holds an ancient potion which poison’s the subject while increasing the human body’s sensitivity ten fold. The idea is that Carrie Chan and her male lover want to take the potion together and suffer indescribable agonies mixed with joy as they are both transported from this mortal coil. Which is kind of interesting but also kinda dumb and is used to set up the idea of an item that everybody in the movie wants to get their hands on to keep the plot moving forward.

Now the thing is, it’s worth a lot of money but Chan and her pawns do tend to keep killing each other off and making more trouble for themselves when, frankly, if they’d have just payed the ‘finder’s fee’ agreed on as the deal for the attainment of this treasure in the first place, everybody could have been on their merry way. It really feels like most of what the characters are putting themselves through in this movie is to fulfil a hastily written schoolboy plot with no real depth or subtlety to be found to make you actually care who has the bloody thing at any one time... which is a big weakness of the film, I think. In some ways it reminded me of the naivete of plot of something a beautifully drawn Guido Crepax Valentina tale might make use of, as opposed to something modern... and that’s not a bad thing but, overall, the simplicity of the construction of the actual storyline was just not sophisticated enough to really draw me into the plot with any kind of sustained emotional investment.

That being said, there are also some more interesting elements to the film.

For example, the shot designs are beautiful and decidedly singular in the choice of colour palette. Often, as a character will stroll from one room to another, she (or occasionally he), will enter a completely different coloured environment and they’ll often be quite strikingly unlike each other - one might be predominantly red, for example, and then a window through to the next room will be bathed in either a blue or yellow scheme. The scenes tend to have just one or two major dominant colours to them... rarely more than that at any one time. Also, the characters and angles of objects are often delineated by shapes which cut the screen into their own sections and this, I suspect, coupled with the highly stylised use of colour, is where the idea that this film shares DNA with the Italian giallo probably stems from... and it is, to be sure, quite astonishingly beautiful in some areas.

However, while the gialli of their day were often falling short in terms of acting and plotting and still managed to get away with it, this film failed to hold my interest, somehow, in terms of both the mise en scene and the musical element, to the same degree that I might successfully embrace a late 1960s or early 1970s giallo. So ultimately, if this sensibility was a key influence on the direction and art design of this movie, then it has to be said I think the style of the imagery never really invokes enough dominance on its own to distract form the shortcomings of the story. At one point a DePalma-esque split screen section pitches two widely different colour palettes against each other but, while the contrast is nice to look at, it didn’t blow me away to the extent that, say, a Mario Bava movie might have... so there’s that.

Another interesting thing is that there are no real leading characters, it seems to me, who are in any way out and out good. Most everybody that you meet in this film are pretty much as bad as each other and it is kind of refreshing to know that, whoever wins in this game of cat and mouse, the film doesn’t take us into the realm of the characters here on an easy route. What’s also great about this approach is that the writer and director can keep on surprising you with the mortality rate of the various people throughout. In a way it’s a little like watching a Star Trek movie if it was only populated by characters who wore red shirts... which is an interesting prospect, of course.

In conclusion though, I’d have to say that, despite the overall beauty of the piece, Red Nights left me slightly disappointed. It’s a glossy and slick film to look at and I think that for many (and normally I’d count myself in this section of an audience), the sheer elegance of some of the compositions is going to be enough, for many people, to lift it a little above a lot of the run of the mill thriller’s being made nowadays. Not a solid recommend from me but certainly something which might well resonate with a key section of my readership... I just don’t think I’m going to be watching it again anytime soon.
Posted by NUTS4R2 at 19:53