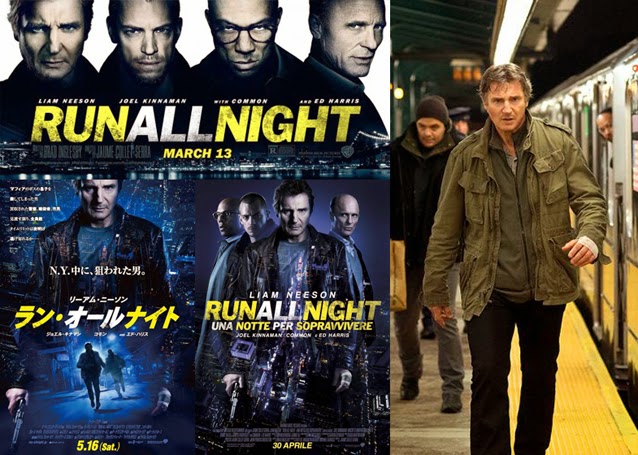 Running Up That Kill

Perhaps it comes as no surprise that this new movie starring Liam Neeson is a bit of a hard boiled action thriller. He’s done quite a few of these kinds of projects now, since his deservedly popular role in the first Taken movie, but to be honest, the films he’s been doing in this mode are always fairly hit and miss and the kinds of roles he’s been taking have become something of a cliché, to be honest. That’s possibly because he’s so credible in these kinds of roles, I expect. That being said, though, I sincerely hope he doesn’t abandon these roles too soon, before he has a chance to do a couple of sequels to the excellent A Walk Among The Tombstones (reviewed by me here) at least.

Run All Night is his third film for director Jaume Collet-Serra, following his work with him on the lamentably awful Unknown (reviewed here) and the surprisingly enjoyable Non Stop (reviewed here). I’m happy to report that, of the three films he’s done with this director, Run All Night is by far the superior movie to the other two, being both immensely enjoyable and actually making sense and following through on its own internal logic... something which I feel Unknown was not quite able to do. It’s also quite a gritty, anti-hero role that the always watchable and talented Neeson brings to life in this movie and it’s usually quite fun to watch the actor tap into his dark side for this kind of part.

The film centres on Neeson’s character Jimmy Conlon, who is a washed up killer for the mob, headed up by the ageing Shawn Maguire, played by the always brilliant Ed Harris. The film concerns the way these two veteran hard men deal with their relationship with each other after Conlon has to shoot Maguire’s son, played by Boyd Holbrook, in order to stop him from killing Conlon’s own, very estranged son, played by Joel Kinnaman. The film then becomes a bit of an action fest as Conlon does his best to keep his son, who hates him, and his son’s family, out of harms way as Maguire goes all out to settle the score.

And, yeah, there’s action galore and it’s all very well handled because it’s treated in quite an “in your face” kind of manner with loud gunshots that spell out ugly death. It doesn’t try to turn the violence into too much of a kind of kinetic ballet as some films choose to do (rightly or wrongly and for whatever artistic reasons) and instead lets you really feel the suspense and danger inherent in the situations portrayed on the screen.

What the film really has going for it, though, is the dramatic undercurrent of the ageing Neeson and Harris both trying to survive in a world that’s moved on from their old school ways of doing things. Both thrust back into an incident where those exact kinds of brutal methods are what they are now having to embrace again to come to terms with, and try to survive, their current situation. And all of this is bolstered with the subtext of Neeson’s son having to trust his father and the possibility of Jimmy Conlon’s partial redemption in his son’s eyes... or at least his acceptance. And, frankly, when you have actors in a movie who are as good as this... it’s rare that they’re not going to deliver the goods in terms of the emotional weight required. They certainly all do an excellent job here.

Now, I really hate to use the clichéd critical term that the movie is a bit of a roller coaster ride... but even if that phrase outstayed its welcome almost before critics started applying it to every mildly kinetic action movie possible, the truth is that this film certainly lives up to this phrase in terms of pacing and it really does whizz along quite quickly... although the actual arc is relatively slowly set up. Nevertheless it’s shot in such a way that the build up itself is hurtling along at quite a breakneck speed and you’re not going to find yourself yawning or checking your watch at any time throughout this movie, I suspect.

That being said, though, my one negative criticism of the movie is that the editing style was quite aggressive all the way through the picture. Now, don’t get me wrong, there were some lovely transitions in this movie, and some nice use of sped up cityscape zooms and transitions to get you arriving at the next sequence, but I would have to say that the average shot length in this movie, which also has quite a lot of moving camera in it, is probably only a few seconds. Even the scenes which shout out for a slower treatment, like rambly conversations between main characters, seem to be cursed with being made up of lots of little alternate angles and edits when, perhaps, it might have been better to let some of these scenes play out more in their master shots, rather than try and speed them up with constant cutting.

Even so, though, if you can handle that spin on the pacing solution, which I guess is one way to keep things moving, then you should certainly have a good time with this one. There’s a lot to like in it. It rarely gets confusing, even with all the aggressive editing, so that’s also a big bonus on this one... especially during the jumpy, fighty, chasy, shooty sequences.

One thing I would like to take a minute to shout out on this one is the excellent score by a composer called Tom Holkenborg, otherwise known as Junkie XL. Now, I’ve got his music to the second of the 300 movies (reviewed here) and I have to say that I thought that was an okay score... although I’ve noticed on various film music message boards that there seems to be a general rejection, in some quarters, concerning this guy’s music... and I don’t know why this is. Now, I don’t know how this score will stand up as a stand alone listen (although I’ve ordered a copy of the CD from the US so I hope to be able to make a judgement on that in a few weeks) but the way it works in this movie is pretty good. There is a strong melody line, almost but not quite a leitmotif approach, which plays out for Neeson’s character and it’s mixed in with typical but immensely listenable and supporting modern action scoring. Here’s the thing, though... it’s also very well spotted...

That is to say, just like masters of the craft such as Jerry Goldsmith, the places where it’s been chosen to either have music or not, is quite well thought out and effectively followed through. To use an example of another master Hollywood composer, think about the pod racing scene in John Williams’ score for Star Wars Episode I: The Phantom Menace (reviewed here). Once the race scene starts, the music is killed off in its entirety for almost the full duration of the race, allowing the sound effects to take over and present a more raw experience, with Williams only bringing in his score towards the end of the sequence to bolster a specific incident and its repercussions on the outcome of the race. In Run All Night, Junkie-XL does a similar thing with a high impact car chase... leaving it almost completely unscored until near the end of the sequence where he suddenly (and wisely in terms of orchestration) starts bringing in some percussion to top off the action and then bring you back into the sound world of the film afterwards... very nicely done. I think this guy is probably a fairly skilled composer and I think the soundtrack community should give him more of a chance, to be fair.

And that, I think, is all I got to say about Run All Night. Well shot, nicely lit, beautiful acting, appropriately handled scoring but a bit jarring on the eyes in some places due to what I feel is maybe a little bit of a case of overenthusiastic editing. If you’re a fan of Neeson’s action movies, though, then this one is certainly one of the better, not to mention most credible, of those... so you shouldn’t have any worries about giving this one a go and you probably won’t want to pass this one up... even if I stooped to calling it a roller coaster. Embrace the cliché.
Posted by NUTS4R2 at 19:42