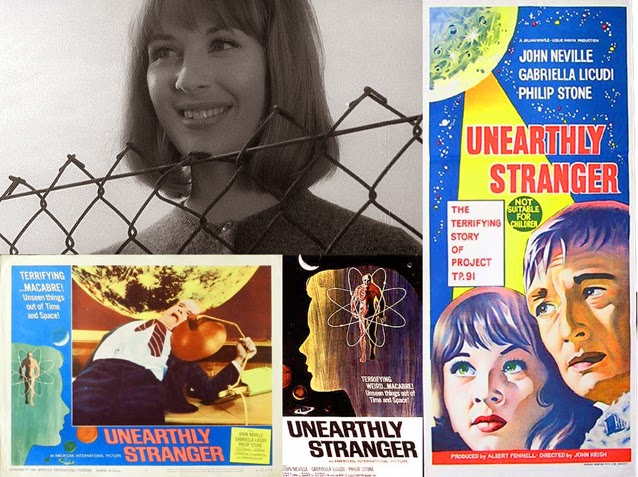 So the team at Network DVDs have done it again. They’ve unearthed an old black and white British science fiction B-movie that has somehow, until very recently, managed to escape my attention... but I’m really glad I know about it now. Unearthly Stranger is a real humdinger in that it is well crafted, well acted and full of tension and paranoia. The real feat of that, though, comes from the fact that, once you hear the basic premise of the plot set up, it’s got to be one of the silliest storylines ever to come out of the UK.

The film starts off, with stark black and white photography, on a shot of a street with a strong musical statement by composer Edward Williams which stops as suddenly as it starts, before carrying on again after a long pause. It’s striking, as is a lot of the movie, which is really surprising and Poe-faced in its execution considering the ridiculous parameters of the plot. Then we see John Neville running... yep, a young version of the man who went on, in later years, to play the title character in Terry Gilliam’s remake of The Adventures of Baron Munchhausen.

And he’s running for his life.

Pausing every now and again to peer back and see if he can detect the unearthly wailing which heralds the pursuit of... something the movie will reveal over the course of the running time. And then, after a long and drawn out “pursuit by nothing” title sequence, he runs upstairs into his workplace office via a spiral staircase... shot beautifully from above as we see him running up the various floors of the building... and he starts narrating the film via a tape recorder as a flashback which lasts pretty much the majority of the movie. This is, of course, a framing narrative device we’ve seen used many times before, perhaps the classic example being in the 1944 Billy Wilder movie Double Indemnity. As Nevile starts talking, telling the person he is leaving the message for that he will soon be dead... we get into the story and the premise proper.

Actually, the way the preposterousness of the premise is made acceptable, bearing in mind the entire movie hinges on it, is pretty skillfully done too. It’s mentioned and everyone keeps a pretty straight face and it’s talked about without being elaborated on. You see, the work that Neville’s character Dr. Mark Davidson is doing is what he’s taken over from his predecessor, played briefly by Warren Mitchell, at the start of Neville’s main narrative. Mitchell has finally had a breakthrough with their work at the UK government, which entails being the first country to figure out the formula, ahead of the Russians and Americans, which will allow man to travel to distant planets in space by using just the power of his mind to project himself there. No, really... I told you it was silly. Just as Mitchell tells his secretary, played by Jean Marsh (remember her as Rose from the long running British TV show Upstairs Downstairs? Not to mention various episodes of Doctor Who and The Twilight Zone?), that he has made a startling discovery and the next thing you know he is hearing strange, unearthly wailing and having a fit in his office. He is found dead, the inside of his brain has kinda exploded, we are told.

We next focus on Dr. Mark’s immediate boss Professor John Lancaster, played delightfully by Philip Stone and his immediate boss, played by Patrick Newell (remember him as Mother in the original The Avengers show?), as they discuss having Dr. Mark take over the role and the secrecy involved with various issues surrounding the death. Frankly, when the acting is as good as it is between these two, who are such a joy to watch, it doesn’t matter how silly the story is... you’re just going to believe it.

Now I don’t know exactly what it is that John Neville does to try to crack the formula of interstellar transport using the power of the mind to project the human body across the timeless tracts of space... I just know the subject is not treated with even the faintest hint of mysticism or astrological phenomena. All we see, really, of the work process, is Dr. Mark Davidson fiddling with a slide rule and taking notes and, while this does look like a kind of lame and less than useful way of spending your working hours, results can be achieved by this method, it transpires.

Meanwhile, Patrick Newell is getting antsy about Dr. Mark having just met a girl on holiday in Switzerland and then marrying her and bringing her back to the UK after knowing her only two weeks... especially when similar scientists have been found in the same state as Warren Mitchell, many of whom have also been married very recently... so after a while he takes Neville off the project for a bit until they can check into the background of his wife, played by the lovely Gabriella Licudi. And a lot of the rest of the short running time of the movie deals with the little signs that Davidson’s wife may not be who she seems. Dr. Mark himself has noticed that she doesn’t blink and that her pulse stops beating and her eyes kind of glaze over as she sleeps, without closing them... and he finds it kind of strange but, not, you know, unduly. When he has Professor John Lancaster over for dinner, Lancaster notices Dr. Mark’s wife handling a tray fresh from the hot oven without putting the oven gloves on... something which he thinks is also kind of strange but, you know, he keeps it to himself for a while.

What the heck? Why are all these top government men ignoring frankly bizarre and impossible behaviour when there have been co-workers with exploding brains? I guess they just must all be very British and let’s leave it at that, the story seems to be telling us.

Just in case we are in any doubt, though, as to the nature of Dr. Mark’s new wife, we have an absolutely brilliant sequence starting off with a baby crying when she looks over at him in his pram and culminating in a beautifully unsettling scene where she is looking into a school playground, through the fence, and the children all stop what they are doing and turn to her... as if sensing she is not of this world. They then, in tandem, all start slowly backing away from her until the playground is empty... it’s a truly simple but effective moment and it reminded me, a little, of the third series of Torchwood: Children of Earth, in both its execution and general spookiness. Gabriella Licudi’s “outsider” character Julie then runs crying and, just to underline her otherworldliness, the tears sink into her cheeks and leave deep scarring from this treatment.

And, I know, this all sounds totally loopy... and to be fair, it is... but I can’t tell you how credible and taut it all gets and how well made the movie is, in spite of its ridiculous storyline. There are some beautiful black and white compositions and some truly wonderous shot transitions, some of which use just a shot in situation, panned around to another character to dislocate us in time and space from one flashback (within  a flashback) and back into the main narrative strand in a truly economical fashion. And this movie is nothing if not economical but I think it says something that Network have actually gone the whole hog and spent the money on a blu ray transfer in addition to restoring this for a DVD.

Eventually, of course, we catch up to the bookend sequence at the start of the movie but there’s one surprise still waiting for us... well, not actually. In all honesty, you’re probably going to figure out the true identity of one of the characters long before it is revealed in the end sequences but, still, it’s pretty much the best way you could go with the story after you’ve painted yourself into a bit of a corner by this point, I suspect. And, following on from a final struggle between three of the characters, which I won’t go into here because I really don’t want to risk spoiling it for you, we have a lovely end shot to the movie which is almost a mash up of footage from Invasion Of The Body Snatchers, Night Of The Living Dead and The Birds. Again, I won’t go into the details but I was especially pleased with the last ten seconds or so of the movie and, again, it takes the silliness of the story to its next logical step. So that’s all good.

There’s one other strange thing about this movie though, and that’s the music. That same four note motif used in Ronald Stein’s score for The Haunted Palace from the same year (a month before the release of this film, in fact) and later made more famous by the... let’s be polite and call it homage, shall we... inclusion of it in Toto’s score for Dune, is also quite prominent in Williams’ score for Unearthly Stranger. I guess, due to the chronology of the two films being so close together in their initial release dates, this can only be a coincidence... but it’s a mighty strange one, musically, it seems to me.

Nevertheless, despite musical similarities and a shaky and preposterous plot which holds about as much water as a leaky sieve, Unearthly Stranger is so well shot, well acted and is kept so intense, that I don’t think there are many fans of either science fiction or old British movies who won’t fall in love with this beautiful little movie. Seriously a great buy and congratulations are in order, once again, to the team at Network who have finally made this hitherto hidden gem available to a generation or two who might have missed it. A brilliant find and I’m really happy to have this one.