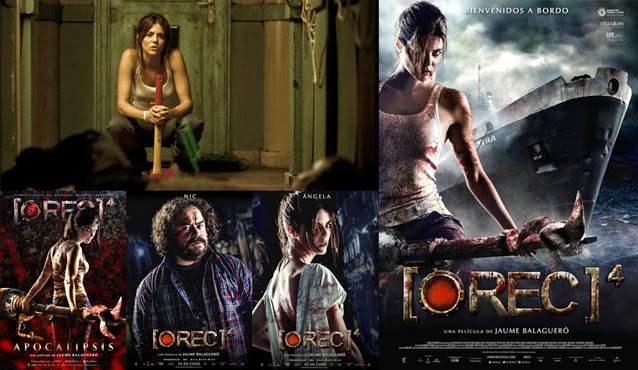 Warning: Spoilers for all the [•REC] movies occur in this review.

So here we have the fourth in the successful Spanish horror franchise, this time directed as a solo venture by Jaume Balagueró, after his directing partner on the first two movies directed the third entry in the franchise, [•REC] 3 Genesis (reviewed here). According to the Spanish title of the movie as found on the straight to BluRay print released this week, the actual title of this movie on the opening credits is [•REC] 4, so it’s somewhat bemusing that the subtitle which translates this title card reads REC: Apocalypse, for some reason. Maybe the UK marketing people thought we were allergic to numbers although, it becomes quite evident right from the outset of the movie, that this is not in any way a stand alone movie... you need to have seen the previous three to get the most out of this one, for sure.

Like the third movie, which jettisoned the ‘camera eye, found footage’ horror approach after about twenty minutes into that movie, [•REC] 4 makes no attempt to bring us back into that style and is told in third person mode right from the start of the story... although much of the various plot twists do make use of surveillance camera technology and even the ‘found footage’ shot during the first film... so it at least keeps the idea of the titles of these movies going, at least.

This movie is, however, still shot mostly with jerky, hand held footage... the difference being that it is not once shown to be footage from a character’s camera. The camera is very reactive and follows various characters at close range to ensure bringing us into the situations with them but, unusually, chooses to often cut away to master shots and establishing shots, right within the same scenes and at a rapid pace. This style doesn’t in any way jar, though... especially since a lot of the long shots looking on in a more voyeuristic manner are equally jerky in comparison, to ensure that all the footage cross cuts effectively, I expect.

[•REC] 4 starts off towards the end of the first (and therefore also the second and third) part in the timeline, with a small team of soldiers going into the original building, one of whom “rescues” TV reporter Ángela Vidal... played once again with much presence and cuteness by Manuela Velasco. However, you may remember from [•REC] 2 (reviewed here) that, contrary to being killed as was implied by the ending of the original [•REC], Angela is now inhabited by the parasitic creature who lived in the “Medeiros girl”, who started the original ‘Religious virus’... and the film keeps iterating this over and over, even though she says she can’t remember anything about the previous events. After the pre-credits rescue, both her and her rescuer wake up on a ship which is quarantined out at sea. The scientists on the ship are trying to perfect an anti-virus and it becomes clear in the narrative that this is still set only a short time after the events from both the first two films, in the apartment block, and the third movie... as the mother of one of the main protagonists of [•REC] 3 also finds herself on the ship.

As you would expect, the virus gets out of control again and the ship is isolated from outside help, quite deliberately in this case, by the very people who are trapped on board the vessel. Obviously, this enclosed space kind of setting is a bid to go back to the general claustrophobic shenanigans of the first two [•REC] films but, alas, without the “found footage” camera eye and the slow crawl kind of lurking dread found in the first two entries, it doesn’t matter what setting you put the action in... it’s not a scary zombie movie like the original and instead, it’s more in keeping with the common and garden variety of zombie movies which the original entry in this series made such a refreshing change from. So basically it’s a shoot and run picture... but it’s not an unimpressive one, once you accept it for what it is.

The main problem I have is that the trick of this one relies quite heavily and single handedly with the audiences belief that Ángela Vidal is the evil element working against all the other characters but, without wanting to give too much away, it proves to be the undoing of any logic to the film because there is another factor which the audience may or may not be aware of but, in terms of the choices made by Ángela during the movie, her actions prove to be much more consistent with her mental state in one situation and, it turns out, pretty much inconsistent with what is really going on. It’s like the director is deliberately feeding the audience red herring after red herring without worrying that in order to follow these kinds of steps, the character would have to be acting in an entirely illogical manner. So it’s a bit of a problem, for me at least, in terms of character motivation in the way in which Vidal works and interacts in this movie.

All that being said, though, it’s still a really nice little horror piece. Despite it being touted as the last in the series, there is a least a little wriggle room given for a sequel although, it would need to be a complete reset to make that work, methinks. However, in terms of being a nice, standard, formula survival horror movie, it does pretty well. It helps that you care about the characters somewhat and, even though it’s somewhat predictable, it is a genre which can thrive on this kind of repeat variation and it’s shot with a certain style and has a much more, low key and appropriate (though possible not as much fun) musical score than [•REC] 3 supporting it throughout... yeah, we’ve come a long way from the franchise’s roots as found footage, that’s for sure.

For all its faults and successes, I think that overall it’s no better or worse than the third film in the series and that’s still pretty good. It’s such a shame though, that the intense scariness of the first installment and the smart, playfulness of the format of the second installment, have been abandoned in favour of more standard “zombie cinema” attractions in the third and fourth in the series. For anybody who loves the [•REC] films, though, and the horror genre in general, then [•REC] 4 (aka [•REC] Apocalypse) is still a good, solid genre entry and shouldn’t disappoint too many horror fans, I should think. I’d have much preferred it to get a cinema release, like the first two movies did, though... audience reaction in films of this nature are always a good thing to look at.
Posted by NUTS4R2 at 18:29