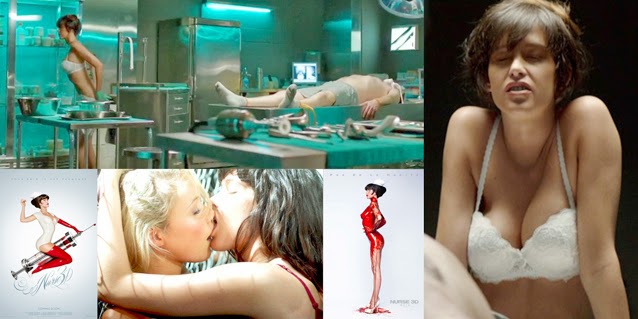 Well this is a refreshing little movie. I took a chance on this because I loved the two promotional posters which were put out... painted impressions of the title character, played in the movie by an actress I’d not come across before called Paz de la Huerta. One poster depicted her totally nude, asides from her nurses' hat and high heeled shoes, but not showing too much because the majority of her body is covered in blood. The other shows her in her nurses' gear and riding a giant syringe. Now, neither of these tableaux are quite in the movie, although the first scenario does have a kind of equivalent moment... but I’m happy to say that the two, quite striking pieces, do sum up the spirit of the piece quite well and I was really pleased by this bloody and sugary confection.

And I’m also, it has to be said, quite baffled by the strangely split response from the target audience.

It’s actually a little more like I was expecting American Mary (reviewed here) to be like, to be honest and, while neither American Mary or Nurse 3D have anything like the kind of levels of grotesque shock and goriness implied by both the content and marketing of those two films, Nurse 3D wins out, for me, by having a very strong sense of humour shot through it which I found sadly lacking in American Mary, to a certain extent... although I notice that exactly the opposite conclusion has been drawn by some reviewers.

Let me start by saying that both the beautiful cinematography and the editing of the film hooked me in right away which, bearing in mind it starts off with the old birds eye cityscape kind of opening which I’ve seen gazillions of times in gazillions of movie, is pretty impressive. It’s not like they’ve even added any new camera movement to the effect, but it’s just so sharp and got so many beautiful colours in even this mundane style of  shot, that I was pulled right into the following sequence of the title character talking to herself and the audience, in a voice-over internal monologue, before I even knew what had hit me. It’s a very fluid sense of camera movement throughout the whole film and it has extremely breezy pacing. Honestly, it feels like it’s a Disney movie or something, right from the opening and all the way through. Like a big, toffee lollipop that Disney might have made, if Disney were in the business of constructing movies around the inner thoughts of a homicidal serial killer posing as a nurse and gorily righting what she sees as wrongs.

The rest of the cast, including Katrina Bowden as the main ‘hero/victimised protagonist’, Kathleen Turner in what amounts to a cameo, Judd Nelson (Remember him? “Don’t you... forget about him...”) and, unbelievably, the great Martin Donovan (who should have won every oscar going by now) are all astonishing but the real star of the show is Paz de la Huerta. She’s really interesting and I think maybe the film’s split focus between the obvious Hollywood main protagonist Danni (Katrina Bowden) and Nurse Abby Russell (Paz de la Huerta), may be one of the reasons people have had a kind of torn reaction to it. The tone is uneven because, frankly, half of the time you are on the title character’s side and are rooting for her, even when you know you probably shouldn’t be... but de la Heurta plays her serial killer role with such a sense of fun and cuteness that you can’t help but be split between the two. However, that’s really not a bad thing and I would suggest that maybe the core audience don’t always enjoy examining the way they feel about their reactions to characters in cinema, perhaps?

Anyway, the film opens with a dazzling scene of us witnessing Nurse Abby Russell in action, as she picks up a man who has no qualms about cheating on his wife (with her) and then slashing his femoral artery before pushing him off the roof of a multi-story building. So, right from the start, Russel is set up as a vigilante, avenging sex bomb and, frankly, strong women like that are always hard to resist and, I’m concluding,  a good thing in cinema in general (even if the constant shots of her naked form  suggest the male-gaze motivation behind the way some of it is written).

At first I thought Paz de la Huerta (full name María de la Paz Elizabeth Sofía Adriana de la Huerta) was a bad actress but then I realised the way she was playing the role was actually, given the fact that it gets quite obvious that the character is definitely a few bandages short of a full medical kit, with a kind of unbelievable, projected intensity and investment in the role. She’s actually quite amazing and very deliberate with the way she both reacts and pronounces things... it’s almost as if she’s done what Bela Lugosi used to do and learn the scripts phonetically... which of course, in Lugosi’s case too, makes you prick up your ears and really listen. Now I’m pretty damn sure that isn’t the case with this particular actress but I do know that something about her means I pretty much couldn’t take my eyes off her whenever she’s on screen. It’s like the camera is radiating towards her all the time and I also couldn’t help but think about Marilyn Monroe, and the way she would deliberately project a personae into the camera lens. It’s almost like Paz de la Huerta is channelling Monroes style of performance in the psycho babysitter role from Don’t Bother To Knock (reviewed here) but totally stripped of any vulnerability and in full, self confident mode... and it’s actually quite a dazzling performance which underpins the whole movie, to an extent. So I need to see more films with her in, for starters, to see if she has this kind of presence in other movies or if it was just something that kind of came together for this role.

Either way, the movie is astonishing in terms of mise en scene, which is a big help, and there’s even a nod to the great Dario Argento in the scene where Nurse Abby injects Danni’s step dad, played by Martin Donovan, and we cut to an expressive and audacious fake shot of the action from the inside of the syringe... which is exactly the kind of thing Argento started doing back in the late 1980s and early 1990s in films like Opera, for example. I would be really surprised, actually, if a director of Aarniokoski’s attitude, who shot second unit on films like Resident Evil: Extinction (very briefly reviewed here), wasn’t in any way influenced by Argento but it’s certainly nice to see him putting his influences up there on the screen like that.

Another interesting thing about the movie is the music, which for the first half of the film doesn’t really do much Mickey Mousing or, indeed, even reflect the psychological landscape of the film to any extent than of being in Abby’s mind... so it just kind of plays through in a very light, poppy, ambient way until, suddenly, things don’t go quite Nurse Abby’s way for a while, which is when a little dissonance and sinister vibrations start flavouring the music. Now, if the composer would have only kept the score doing that, then that would have been a noteworthy choice for this artistic voice because it would mean that the score is only reflecting Abby’s thoughts... enhancing the character’s presence on screen through the style of the scoring. Alas, very soon after the score turns into this area, composer Anton Sanko also starts using it to describe the threat to Danni’s character too... which is a shame, I think. That being said, it might not have been the composers choice that the music does this at various points in the movie so I have to give him the benefit of the doubt on this one.

All in all, though, I was really pleased by the way Nurse 3D turned out, despite the lack of goriness implied by the marketing. I think this movie should certainly be a little more appreciated than it seems to be and I’m really surprised to find that, since it was actually completed in 2011, it was wallowing in distribution hell for two years prior to its release. This is a movie I would recommend to pretty much anyone who likes a good serial killer movie, especially because the narrative viewpoint of the story is actually from the killer herself... and that’s not all that usual in these kinds of films (although there have certainly been a few famous examples of this in cinema over the years). As a result of this movie, I definitely need to start looking out for films featuring Paz de la Huerta (I think I can see one I’ve not seen sitting on the shelf opposite me as I write, actually) and I’ll certainly give this movie another watch sometime in the future. A charming serial killer movie, as far as I’m concerned.
Posted by NUTS4R2 at 19:30