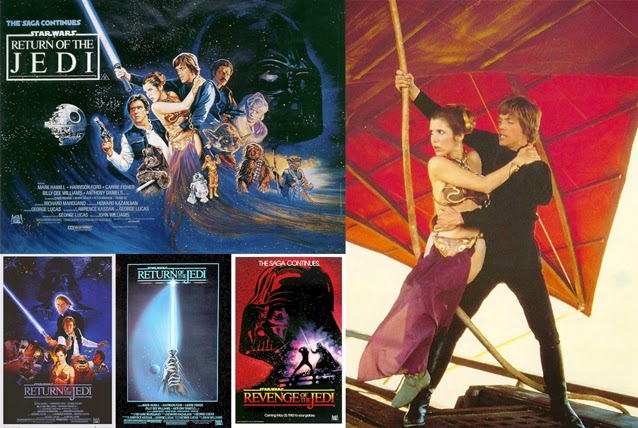 By the time Return Of The Jedi was released into cinemas in 1983, things had gotten really weird. I was 15 and any Star Wars fantasies I was still having mainly centred around Princess Leia being in the same room as Caroline Munro, Sybil Danning and Valerie Perrine. The other kids had all gotten to the age where they had given up collecting their much prized Star Wars action figures (I was soon to follow this trend) and were pursuing rock music and turning their back on film scores (something I never learned to do... film music is just so versatile and rewarding compared to most other stuff).

I was still a die hard Star Wars fan, though, and I remember going into London with my parents, once more, for what was to be (and still in some ways is, depending on a certain point of view), the very last movie in the series... ever. I’d not bothered to read the comic book adaptation this time, I think. I was saving it until after the movie... so I didn’t have much in the way of spoilers (although I’d worked out Leia probably had a family connection with Luke a couple of years before). I was pretty sure nobody would ever get to making the other six films that would allegedly complete the three trilogys. Movies were too expensive and signs weren’t looking good at around this time for there being any continuation in the series.

When I finally saw it I was kinda thrilled all over again... not as thrilled as the three middle aged guys sitting in front of us who were screaming their heads off but, still... pretty good seeing it up there on a huge screen in London’s Leicester Square (I can’t quite remember which cinema it was I saw the third movie in... I think it may have been the Empire). There were some very strange and disappointing things about it though... including, of course, the cutesy Ewoks. Did we really need that in a Star Wars movie? Also, why the heck did Jabba the Hutt, who I knew as a fairly humanoid life form from his portrayal in the Marvel comics adaptation of the original Star Wars movie, suddenly look like a big slug. How was this continuity? I wonder, now, when those issues are reprinted these days, if the panels are re-drawn to accommodate what Jabba eventually became when he was retro-fitted back into Star Wars Episode IV A New Hope, many years later.

Return Of The Jedi was great but I had one really big criticism of the movie when I saw it then and now, as I watch it again in a new version on Blu Ray, I have to say that this is still a very valid criticism... What the heck happened to Han Solo?

In the first two Star Wars films he’d been the cool space pirate who always got the upper hand and, you know, shot first and asked questions later. We already knew that Harrison Ford could actually be a great actor because we’d all seen him the year before in what turned out to be, not just his greatest film, but the greatest film ever projected on a cinema screen of all time... Blade Runner (my review here). His performance as Han Solo should have been a natural for him here but instead, we get a strangely comic and overly theatrical portrayal of the character. Everything Ford does with Solo here seems exaggerated beyond belief, like he was playing Han Solo for a local, dodgy Christmas pantomime... as opposed to one of the highest grossing movies of all time. I’m not blaming Ford necessarily, he might have been directed to behave this way in front of the camera, but it doesn’t change the fact that we have a largely dumbed down version of the character in this episode. This was a real disappointment and left a slightly bitter taste in the mouth. If course, years later, when Lucas released the special editions into cinemas ahead of the release of The Phantom Menace (reviewed here) Solo’s character had been further dumbed down in the original film by having Greedo shoot first. This caused a lot of hostility from the fans towards Lucas, I believe, and is probably still a hot topic for many.

Solo and cutesy suits and puppets aside, however, we have a film with some blisteringly good set pieces to it. Luke is dressed in a black costume which, we were told at the time, was deliberately done to blur the lines of good and evil when he confronts Darth Vader. Either way, his rescue of Leia, Chewbacca, Han, Lando, C3PO and R2D2 is absolutely fantastic and, coupled with Johnny Williams awesome music, which in this sequence is a medley of several melodies used in the original movie, it’s absolutely irresistible film making. Similarly, the speeder bike rides through the forests of Endor are absolutely triumphant in their execution and still cause great excitement.

Finally, the whole last half and hour or so cross cuts from three sets of protagonists having three separate styles of battle scene and it’s absolutely tremendous. The boisterous action of the forest battle is cross cut with Lando Calrissian taking on the new Death Star in the Millennium Falcon (backed up by the whole rebel fleet in some spectacular shots) while Luke is still on board said battle station and engaged in a light sabre dual with Darth Vader... this is all good stuff and makes for a movie which mostly consists of dessert, in that it delivers action treat after action treat.

Most of the performances (asides from Harrison Ford in this one) are fine, the music is suitably iconic and rousing, the special effects were state of the art (for their day) and the story line, wearing a lot of its influences on its sleeve again, is far from dull and will have you riveted to your seat. Unfortunately in terms of both the cinema release special edition and the new blu ray edition, the various Lucas revisions make for a far worse time than you would have had with the original movie. Some of the best score cuts, the song Lapti Neck and the original Ewok Celebration, are excised and replaced with much less hummable pieces of music and the footage replacing some of the key scenes in the movie is absolutely horrible. Worse than that, on the blu ray edition, we have the ridiculous Darth Vader “Nooooo. Noooooo.” shouts as he completes his final act of redemption. Seriously George, it was a lot subtler without that blindingly stupid addition... trust me on this one.

Still, even with all the terrible later editions and replacement effects on the Blu Ray versions, Return Of The Jedi is still a classically good Star Wars movie, although I think it’s the least best of the original trilogy and my fourth favourite Star Wars movie so far (I really liked The Phantom Menace a bit more than this one... sorry about that). Like all the films from the original trilogy, IV - VI, I much prefer the original cinema releases over the overly tampered editions (which I still have as extras on one of the sets of DVD versions from over the years) but even in its new form, Return Of The Jedi is still a solid entry in the series from a franchise that has now awakened once again. The release of the seventh instalment is less than a year away as this review goes up on the site and I liked what I’ve seen on the first teaser trailer just fine, so far. Of course, time will tell on that one but I hope to be reviewing it on here then so, please, check back here when the new one comes out to see what I make of it... I’ve got high hopes and mixed feelings about it, to be honest.