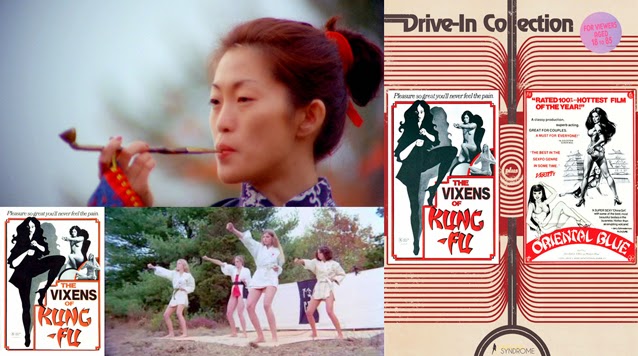 Below The Black Belt

When I started this blog almost five years ago, I certainly wasn’t expecting, or even entertaining the notion of, reviewing hard core pornography. I’ve got nothing against pornography, at all, but I just don’t think it would make an interesting thing to review and it’s not the kind of material I would want to be synonymous with the NUTS4R2 identity, if truth be told.

That being said, I have no compunction about reviewing the odd (hopefully very odd) exploitation movies, grindhouse movies and long standing readers will note that I have a fair mix of different kinds of reviews on this site. When I ordered this film, The Vixens Of Kung Fu, it was because I’d seen the movie poster via someone on Twitter and it promised a film full of naked ladies in kung fu battles... which I thought would very much be a movie I’d want to shout out to people via this site. I didn’t realise, even when I started watching this movie, that it was actually a mid-1970s hard core porn film, probably shown at a fairly specific set of adult cinemas and drive-ins in the US at the time... presumably garnished with an oriental flavour due to the popularity of the David Carradine TV show Kung Fu at the time. It does, however, have some really stupid and noteworthy (of sorts) things happening in it so I’ve elected to include a review here because, as of yet, I’ve got nothing else like this one on this site. Whether I review the companion movie on the double bill DVD, Oriental Blue, or even bother to watch that one... is up in the air at this time.

So I started watching this thing and the film starts with... well, some really nice and colourful photography, actually, as a figure wanders through rural landscapes midst some really terrible, cheesy ‘Japanese/Eastern philosophy narration nonsense’ of the kind only a Western scriptwriter could have come up with... although the idea that this film has a script really doesn’t hold up much as it even fails to provide coherent linking material between what is, honestly, just a load of sleazy hard core sex scenes.

A woman in a forest is accosted by three, badly dubbed gentlemen (at least, I hope that’s not their real voices because, honestly, this is worse than the voices on a cartoon) who then proceed to shoot the woman with their “anaesthetic gun” (which looks like a regular revolver because, who can afford special effects on this budget?) and then rape her semi-conscious body. When the three individuals in question stripped down to nothing and got their throbbing weapons of choice out, I got my first hint at why I hadn’t been able to find an entry on this film in the IMDB*... although I did find it later on a very different kind of movie database, which is not the kind I would usually find myself frequenting. In order to convince us the “anaesthetic gun” is actually a believable tranquiliser, instead of a lethal killing machine, the soundtrack plays a sleepy harp arpeggio as the woman collapses. We are then treated to what amounts to an extended rape scene as the three men make use of her unconscious body in a very graphic manner, starting off with some jaunty banjo music to presumably align them with a hillbilly mentality of some kind, and then continuing with some kind of comedy soundtrack playing in the background. It’s really sleazy and I nearly turned it off right there (believe me, there’s a lot more competently made and imaginative porn out there than this sad debacle) but I really wanted to see the naked kung fu.

After the men have their way with the sleeping lady and then flee (leaving the movie for good, asides from a few seconds of flashback at a later point), we have a scene where another lady, Cunchon, is training her naked followers (there’s about five of them, all women) in the ancient art of kung fu... although, as we will see as the film progresses, this is not any form of kung fu you’ve ever seen before. Cunchon briefly turns into a bird, with the miracle of cutting from one shot to another, and then finds the girl from the forest naked on a beach. How she got from the forest to the beach is anyone’s guess and, frankly, not something the script writers, if there were any on this movie, saw fit to address.

Cunchon takes her new disciple under her wing, so to speak, and, giving her a naked massage with added and inappropriate breast sucking, she asks the forest lady for her story. Forest gal answers that she’s a prostitute, and then we get treated to various lengthy sequences of her “on the job” in flashback. Yes, this is a classy film alright.

After these sex flashbacks have played out, she then tells her new samaritan about her rape in the forest.. which of course leads to them having full on lesbian comfort sex. And, like all the other sex in this movie, it’s terribly boring 1970s quantity not quality sex which held my interest so little that I was able to keep taking my eyes off the screen and type notes into my iPhone as it played out. It was getting kind of boring but...all was not lost in terms of the possibility of some bizarreness... even if I had to sit through a sex scene with a terrible pseudo-oriental song playing in the background. Even though they are in a hot, forest and beach combined location (somehow), the gals manage to have sex on a polar bear rug. I guess that would lend some legitimacy to the term rug munching but, seriously, a polar bear rug?

After this, Cunchon teaches her pupils the mysteries of kung fu. Which means we have an extended sequence of naked ladies sitting cross legged and breathing heavily while the camera concentrates on the philosophical aspects of the scene against the semi-oriental soundtrack... and then the various ladies’ vaginas start smoking... presumably to signify their climb to enlightenment and their burgeoning ‘kung fu powers’. See, I knew there would be a reason why I should carry on watching this movie... bizarre smoking vaginas. There’s a phrase you don’t expect to write every day. Or maybe it was supposed to be steam. It definitely looked like these ladies would be coming to a boil at some point soon.

It's at this point that a wandering monk turns up and the two girls beat him at kung fu and take him prisoner. Now, hold on, because when I say kung fu, I’m using that as shorthand to try and describe what’s really going on here... which seem to be fast cuts of the various people appearing, disappearing and then reappearing in space in various poses without actually connecting with each other, let alone actually sharing the same shot, until one of them is lying on the floor. It doesn’t even once try to be realistic and... well I guess a case could be made that it’s artistic expression if you wanted to have a go... but either way, it’s hilarious.

Once the wandering monk has been captured, due to the girls’ proficiency at exploiting blatantly ‘WTF camerawork’, they have him naked in their outdoor training area while their leader tells them to devour him. Apparently, though, devouring him just means they all have group sex with him for ages. While this was as unbelievably boring and surprisingly even less than entertaining than the other assorted sex scenes which comprise the movie, it did have one thing of note in it, when I realised that the movie makers had needle dropped parts of Lalo Schifrin’s Enter The Dragon score over both this, and a later sequence. Apparently, after the sex, the ladies are supposed to destroy the monk but, somehow, he manages to be out and about of his own free will again after this sequence. So... you know... could have done with some scripting here, methinks.

So the monk wants to get some kind of revenge and he seeks the teachings of another kung fu mistresss, who teaches him the art of... kung fu masturbation, by the looks of things. I don’t see it as something you’d need a black belt in myself but, you know, I’m sure there are hidden health benefits tied up in ancient, oriental philosophy of which I was previously unaware. The man is further trained by running along a beach while letting his modesty hang in the wind, with weights dangling from it. Presumably this helps him maintain his strength when he most needs it? Meanwhile, we have lots of shots of forest gal and her new leader also running along a beach... although this does nothing to compensate for not really being able to tell what the heck is going on from scene to scene. More continuity required, guys and gals.

And then, I guess, there’s the big showdown... between the monk and the lady from the forest.... who presumably have nothing to do with each other in the plot at all but, hey who cares, let’s pitch them against each other anyway, right? So lots of posturing and limbering up between the two is caught on camera until, just when you think the scene is going to explode into an orgy of naked kung fu fighting, the lady in question suddenly tumbles head over heels towards the man and... starts licking away at his specially trained kung fu weapon. And... we’re in another sex scene. Some kind of bizarre showdown sex scene, it seems, where the camera stock was so expensive, in relation to the budget, that when a wasp tries to enter the fun as the lady in question is sucking down on the monks own personal nunchakus, her squeals are left in as she bats the said wasp away and out of the shot. This is quality film making, ladies and gentlemen.

*Please note: Since I wrote the first draft of this review,
there's now a listing for this movie on the IMDB, for some reason.
Posted by NUTS4R2 at 19:22