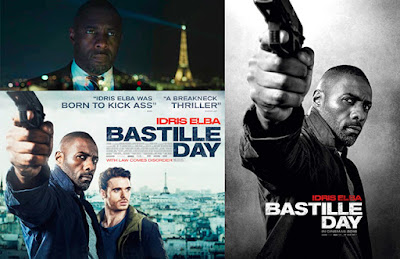 I really wanted to like Bastille Day. I’d seen the trailer and, though it felt a little flat in places, it looked like a solid action thriller in the now familiar mode of a cop using a roguish criminal to save the day, despite antagonism from both the criminal underworld and the police department. And that’s more or less what this is, to be honest... except the main lead, played by Idris Elba, is a CIA agent working in Paris, and he uses a pickpocket who has been mistaken for a terrorist to crack open and foil a possible terrorist plot on Bastille Day in France. Trouble is that, like the trailer, it’s an okay action thriller... not a great one.

The fault certainly doesn’t fall in the laps of the actors though. I’ve been a fan of Idris Elba in film (not seen his TV stuff) since I saw him in the second Ghost Rider movie and he does an excellent job here. Tempering his tough guy, rather imposing personae by having an action hero, Briar, that will also get bashed about a bit and doesn’t always clear out of the way of the traps before they happen. So a more realistic, in some sense, version of the kind of kinetic characters you usually get in this kind of movie. Richard Madden plays the pickpocket, Michael, working with Briar to foil the dastardly plot and clear his own name in the process, after he stole a bag and then dumped it before it exploded and killed four people. And they, and all the other supporting actors in here, do a really good job with the movie, creating quick and credible characters that the shorthand of their trade would permit in this kind of punch and chase driven bullet bonanza.

And some of it is nicely done, to be sure. The problem, I think, doesn’t fall into the hands of James Watkins either, since the action sequences and small character moments in the film are all handled simply, allowing you easy access into the heart of the story and without losing you at any point. Indeed, he and his editor also manage to use some surprisingly good labour saving moments where the camera movement and style of shot, such as a zoom, will take you into a later part of the same sequence using a similar style and speed of shot, neatly cutting out unnecessary footage and all without confusing the audience... which is a pretty neat trick and to be applauded, actually. Especially when he does it in the middle of an action sequence and then you find yourself going from mid or close up to a later point in the sequence in long shot of a different view without any transitional glitch at all. Very well done.

Even the score on this one, by Alex Heffes, is quite distinct and holds its own during the noisy shoot outs, ably supporting the action and helping to move things forward. It’s a shame it’s only out on download rather than on CD but, as I’ve said before on here, no CD equals no sale. Downloads are a real turn off for a number of reasons.

However, the film has a huge problem in that it seems to telegraph every twist and turn before it even happens here. Yes, I know we’ve all seen a gazillion other movies like this and so, as an audience, there are a number of permutations of expectations as to what each and every character type is going to do in a movie like this but... shouldn’t the writer be allowing for that and not falling into the clichés created by those kinds of situations? This film really is full of little twists that, honestly, everyone is going to see coming way before they happen. I was going through the whole movie thinking things like... “Oh, this character is going to get ‘shockingly’ shot dead by this ‘friendly’ character in about 30 seconds” or “This character is in no real danger here because the other guy the audience is supposed to have forgotten about is just standing over there, ready to make an appearance”, and so on. There really are no surprises in this movie and that really harms it a lot because there actually isn’t a lot else that these kinds of films have going for them, to be honest.

And, though the main leads are likeable and start building up a relationship, I think there could have been another one or two sequences put in purely to show the developing chemistry between them because, at a certain point in the film towards the end, I was really wondering why Character B was bothering to put himself back into the line of fire for Character A when, really, he was already in the clear. So, yeah, just a little more character development/interaction stuff in this one would have been nice, to be honest.

Other than that, though, all grumbles aside, there are a lot lesser action thrillers than this one out there and if you’re a fan of Idris Elba, you probably won’t want to miss out on this one... although I really think he could do with a better vehicle than Bastille Day, truth be told. Still, an okay and somewhat unchallenging time at the cinema for action fans. I’m positive there are worse ways to while away an hour and a half. So maybe give it a go if you’re not worried about seeing something a little formulaic in the time you have. It’s not the worst film I’ve seen of its kind, for sure.
Posted by NUTS4R2 at 18:56