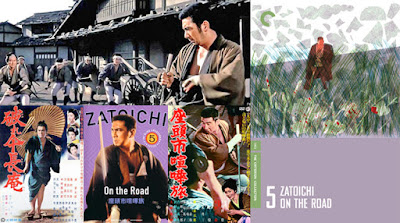 So I’ve been inadvertently neglecting my Zatoichi watching and reviewing of late. Hopefully I can get back into the swing of that with this, the fifth of the 26 Zatoichi films starring Shintarô Katsu as the blind swordsman (not including his 100+ episodes of the TV show) and the first of the films to be directed by Kimiyoshi Yasuda.

The film opens, pre-credits, with Zatoichi rumbling a gambling con. He slices a candle down the middle, extinguishing the light so he can get the upper hand, and deals with the whole roomful of gambling antagonists stating, in a shout out to the subtitle of a much later Zatoichi film in the series, that “Darkness is my ally.” As he finishes with his enemies, the title of the movie comes up and composer extraordinaire Akira Ifikube’s four note Zatoichi theme swells on the soundtrack. As the music and credits play out, we then follow Zatoichi’s progress 'on the road' as he encounters a fellow traveller and stops at the Edo period equivalent of a roadside diner with him to eat as the opening titles finish.

The traveller is on a mission to take Zatoichi to his boss so that said boss can negotiate for Zatoichi to join his side in a stand off against another boss in his town. Alas, it’s not long before this man becomes a casualty as three swordsmen kill him trying to take out Zatoichi. The blind man learns from the widowed wife of one of the men he has just despatched that they were just hired on the spot to get rid of Zatoichi. She seeks vengeance on Zatoichi but is obviously in no position to do anything about it... at least not right now.

We then stumble into another unrelated, at this point, subplot where our hero finds a dying man in a forest. A group of samurai are looking for a lady called Omitsu and have mortally wounded him as he was protecting her. The dying man begs Zatoichi to see Omitsu safely to Edo, just before he passes away. Zatoichi stumbles into her and, eluding the chasing samurai, takes her under his protection.

Like pretty much all of the Zatoichi films starring Katsu in the title role, as far as I can remember, Zatoichi always talks to himself, rendering his inner dialogue as an external monologue. Voice overs are rarely used in the Zatoichi movies, to let you know what he is thinking... Katsu always does it himself, in shot. This always has the trick of making him a much more likeable, easier to identify with character from the audience’s point of view, I suspect. Having these things rendered as such on the surface makes him seem less devious and more friendly... at least that’s how I always interpret these many instances of talking to himself that the character exhibits in the Katsu versions and he’s enough of a great actor to pull this stuff off without the audience, as far as I know, ever once questioning it. Works for me, anyway.

That being said, I think I spotted a rare, slight mistake in this one because, after Zatoichi has killed two of the pursuing samurai, he reaches around for Omitsu’s hand to lead her out of harm’s way. Since she is holding her hands up near her head, one wonders how Zatoichi would know to reach up there rather than drop his hand to where her hand would normally be expected to be. Now one could, of course, argue that the deductive radar system he has set up in his head from having his sight taken from him and which allows him to avoid or block the killing blows of his self-styled enemies could, in fact, easily tell just where someone’s hand is when they are at rest. I don’t know though... I think this is a bit of a stretch and a rare slip in the actor’s concentration which just got by the director at the time. Frankly, who can blame him or begrudge him that. Katsu does such a great job of playing a blind man over the decades that I think you have to cut him a little slack in the odd moment like that.

After this, of course, the two different sub plots become linked and Zatoichi is left to fight both sides of the big fight with one of the bosses, as they both try to gain the girl, who they believe is of some value, to use for either a reward or as a bargaining chip to buy the services of Zatoichi. It all gets integrated with various other plots threads dropped down in the early stages of the film and, of course, the widow of the samurai Zatoichi was forced to dispatch also plays a hand in the unfolding drama.

It’s a nice enough story with big flashes of action and Zatoichi taking out a heck of a lot of opponents towards the end... the majority of both warring factions. However, it’s not as flashy or overt in its cinematography as some of the more visually spectacular episodes in the film series and although there are some nice touches like a dragonfly taking off of a plant and then landing again (in reverse footage), bookending the flash of Zatoichi’s sword as he effortlessly takes out one or two of his enemies... the majority of the direction and camerawork is pedestrian. It doesn’t detract from the pacing and intrigue in any way... although I have to say that the actual through line on the story does seem a little fragmented and jumpy in certain stretches of the film. Almost like there were supposed to be more connecting scenes which never made it into the movie.

That being said, I did notice the occasional interesting shot at certain points. There's a cool shot on a transition where the camera is looking up and around the tops of the trees, almost as if searching for a sense of focus of the shot before meandering down to Zatoichi and Omitsu and then cutting to a tighter frame of them. That’s a pretty wild way of doing an establishing shot and I wonder what the reasoning behind shooting this one like that was. Another interesting visual flourish I noticed or, visual method at any rate, is that a fair few of the external location shots are taken from very low down, like the camera is in a ditch or a specially dug hole, to mask the bottom of frame with the landscape while the action plays out in top fifth sliver of the screen. It’s kinda interesting but it didn’t particularly, to my mind at least, gel with any of the other camerawork used in the movie, which seemed less special or focussed to a particular artistic expression than those sequences I just described.

At the end of the day, though, this is still a solid Zatoichi film and the director went on to helm a fair few more as the series progressed. The performances, as you would expect from this, are all pretty much faultless and Ifikube’s music, one of many scores he did for this series of films, while not particularly inventive or striking as some of the other composers who worked on these, is pretty reliable and packed full of emotion. On The Road is a pretty watchable entry in a truly magnificent series of movies about the blind swordsman. As I’ve noted before, the Criterion Blu Ray/DVD combination box set is the way to go when watching these films. If you haven’t seen these classics of Japanese cinema before, then... it’s definitely worth a purchase.
Posted by NUTS4R2 at 19:09