Couple In A Hole 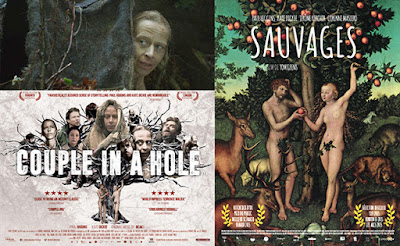 When I first saw Kate Dickie retweeting about her new movie, Couple In A Hole, a few weeks ago on Twitter, I pretty much knew I’d have to go see it. Unfortunately, it wasn’t playing at Cineworld, where I have a monthly card, so I had to pay the equivalent of what would be a month’s worth of cinema at my local fleapit to the Curzon Soho in London but... well, there was no way I wasn’t to be seeing a movie with such an evocative title now, was there? In France the film is known as Sauvages but, frankly, that title is not nearly enough to get me into a cinema like the UK release one is.

The film has a very small cast of about six people, only four of whom one could be called anything more than speaking extras, but their talent combined with the evocative situation in which their characters find themselves in, certainly makes for somewhat compelling viewing. The story is basically the aftermath of an incident which is unseen and which happened in the past for the characters involved... John and Karen, the title characters played by Paul Higgins and Kate Dickie, were a Scottish couple living in a village in France but they lost their only son in an incident involving a fire. We don’t know the specifics of the fire but little clues and hints start to appear as the story follows its way.

As a reaction to their sad plight, John and Karen are now living in a big, fallen, hollowed out tree in the nearby forest. Karen is practically unable to come out of her new home, most of the time, because she hates to be outside as a symptom of her experience, although John patiently coaxes her out for a few minutes each day. Meanwhile, he hunts for food and keeps them surviving as best he can. This isn’t always good enough and when a highly poisonous spider bites Karen and he tries to get medicine, somewhat covertly, from the local village, he is aided by Andre, played by Jérôme Kircher. Andre helps out John as best he can although this is something John is quite resistant to at first. However, Andre’s wife Celine, played by Corinne Masiero, isn’t so happy about this and, as the film runs it’s course, we get more than just an inkling of why this might be... as certain details which provoke more questions are revealed about the relationship between the two sets of characters.

Over the film, the uneasy friendship between John and Andre mostly takes centre stage. The two wives, Karen and Celine, are resistant to their husband’s growing friendship... although Karen doesn’t find out about it until near the end of the film. That’s pretty much all I have to say about the plot of this one. Other than it reveals itself in a leisurely fashion, with everything moving forwards to a kind of inevitability in it’s conclusion over the last ten minutes of the movie.

The performances are great... especially those of John, Karen and Andre.

Kate Dickie gives her role a sense of traumatised joy in certain scenes and the facial expressions of her inner monologue are truly something to behold at key moments. She’s truly remarkable as she crawls along the muddy floor of the forest and slowly lifts herself upright. Paul Higgins is a generally likeable individual. Although his situation does push his behaviour to certain extremes throughout the story, you can always see the polite and amiable fellow behind the man (who often carries a small axe with him). Jérôme Kircher’s character might be overlooked by some but the subtle way he carries a sense of guilt about he and his wife throughout the movie and how he expresses this through social trickery to attempt to help John and Karen, almost covertly, is quite remarkable and subtle in places. Corinne Masiero doesn’t have a sizeable enough role to really shine as much as the other three but what little of her performance there is, is also extremely good, as we try and figure out what motivates her actions and her intent towards the... Couple In A Hole.

The photography is fine in this, with the movie obviously set in ‘the great outdoors’ for almost its entirety. The editing is spot on too with shots held for just long enough and nothing too short or obscured in terms of over pruning the various sequences to the point where any of the performances or their context is obscured.

The score, by a band called Beak>; is sparse. It’s not a traditional score but it kinda works in most of the scenes it plays in to heighten tension. However, the majority of the film is left unscored. Now, bearing in mind how much I love film scores and think they really add to the art of film, I think the decision to leave a lot of the performances without musical accompaniment was a good one by the director. In itself, the music is effective but I’m not sure a CD release is anything I would go on to purchase at this time (yeah, I know, famous last words). That being said, it hits the right notes, so to speak, and certain scenes do benefit from the subtle intrusion of music into their visual and aural DNA.

My one real criticism of Couple In A Hole would be the very last minute of running time. There’s a choice to be made by one of the characters and it’s a choice the audience probably doesn’t want him to make, if they’re anything like me. However, the decision is taken out of his hands by a somewhat ‘deus ex machina’ moment at the end and, although there are a couple of sequences in the film where this specific conclusion is foreshadowed poetically, both textually and visually... I didn’t really appreciate the introduction of this kind of moral problem solving at the end of the piece. It’s certainly aesthetically pleasing enough on one level but it didn’t quite ring true with me. However, that’s just my response to the ending, which I obviously won’t reveal here, and it certainly does nothing to mar the beautiful lead up to this moment in terms of a fiercely evocative movie. Not one I wanted to miss (hence my willingness to pay the exorbitant ticket prices of a London West End cinema... which costs probably more than a Blu Ray release of the film will cost later on down the line) and I’m certainly not regretting this decision today. Fans of cinema and of human nature in general should definitely take a look at this gem from director Tom Geens. It’s a terrific little movie and looks great on a big screen.