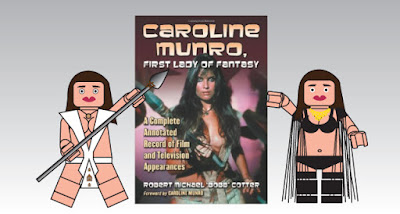 If you’ve been reading my blog for a fair old time now, you will probably already know that one of the film and TV personalities I admire most in British cinema is Caroline Munro, often referred to as The First Lady Of Fantasy. I’ve met her a number of times at signings in the major London Film Conventions over the last 6 years or so and she always strikes me as one of the friendliest and, genuinely, nicest people in the world. She even offered me some paracetamol from her handbag once, when it was clear I had a bad cold while queuing for a signed photo. A really great lady.

Of course, Caroline’s rich cinematic legacy speaks for itself with some key roles embedded in the hearts of many admirers, from films such as Dracula Ad 1972 (my favourite of the Hammer Dracula movies), Captain Kronos: Vampire Hunter, The Golden Voyage Of Sinbad, At The Earth’s Core, Star Crash and The Spy Who Loved Me. Fans like me can be a little bit obsessive when it comes to tracking down the films that Caroline’s been in over the years and this is where Robert Michael Cotter’s Caroline Munro - First Lady Of Fantasy: A Complete Annotated Record of Film and Television Appearances comes in dead handy.

Sporting a foreword by the lady herself, Cotter goes on to explain that this particular tome does not provide biographical information on the lady herself because, as some of you may know, Caroline has been hard at work on her own memoirs as the years have gone by... a book I’m chomping at the bit to finally get to read when it gets released at some point in the future. However, what this book does do is to give us a pretty clear and thorough reference work listing all of Caroline’s appearances in various film and TV projects over the years, not to mention appearances in various adverts, interviews, music videos and magazines. Talking of adverts... I was a child model in the early 1970s and will always remember her as the Lamb’s Navy Rum girl on those huge adverts in the London tube tunnels. I still remember, to this day, coming out of a screening of The Golden Voyage Of Sinbad in 1973, when I was five years old, and then going onto the tube and noting the similarity of the lady staring back at me from the poster and the lead actress in that film. Those were good days.

The majority of the films and TV appearances have, following a full set of credits for the work in question, a synopsis or light review of that work. This is either lifted from a contemporary review of the original release or a precis provided by Cotter himself. In fact, the review segments are usually a compilation of the two elements, before Cotter then goes on to assess the film on a more critical level and provide any fascinating behind the scenes stories or comments taken from interviews done either at the time or in retrospective. Of course, for any fan of the lady herself, this is a goldmine of information... especially if you want to know whether it’s worth tracking down a rare item on a venue like eBay or whether Caroline is only in something for less than a minute. Die hard fans will, of course, want everything they can get their hands on.

If I were to have any criticisms of the book they would be that the various entries are uneven in their word counts but, I guess, that’s just the nature of the beast. The director spends an awful lot of time on the two Dr. Phibes movies, for instance, when Caroline is hardly in them at all, because they seem to be two of his favourite movies. Another minor criticism is that the insides of this particular tome are in black and white but, seeing as it’s quite a pricey volume, one can understand why the publishers didn’t delve into the realm of full colour photo inserts for this one, although it would certainly have been nice.

These are minor quibbles, however, and I’m certainly glad I got one of these in my Christmas stocking this year (thanks Chris and Ross). Now I know Caroline made appearances in shows like The New Avengers, that's another title I have to track down to go on the list with a few others I’ve got my sights on. This is probably not the definitive book on Caroline... I’m still waiting for her memoirs to come out, but to tide us over, it’s a very good reference work which many fans of horror and fantasy will want on their shelves. Certainly something I’ll be dipping in and out of over the coming years as more stuff by the fabulous lady is, I’m sure, released onto DVD and Blu Ray formats (and the oncoming storm of troublesome digital downloads too, no doubt... don’t get me started). An invaluable resource for fans of Ms. Munro and definitely something you would want to check out if you count yourself among their legion.
Posted by NUTS4R2 at 19:03