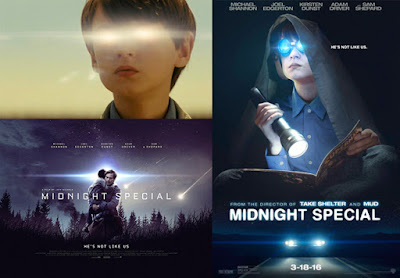 I’ve been waiting to take a look at Midnight Special since seeing a clip and then a trailer for it on the internet sometime last year. I’m not familiar with the work of Jeff Nichols because I’ve never really been all that interested in the subject matter of his previous movies but this one looked like it was a kind of Steven Spielberg style sci-fi movie with a darker edge. After now having seen the film, I can confirm that this is exactly what it is... at least that’s what it seemed like to me.

The film is very much one of those stories which relies on the audience and key players trying to figure out just exactly what is going on as the writer/director holds back on the specific details of the mystery at the heart of the movie. That mystery being the enigma of an eight year old boy called Alton Meyer, played by Jaeden Lieberher, who has eyes which light up, like one of the kids who lived in the Village Of The Damned, and has strange stuff happen around him when this occurs.

This one is very much a road movie, in that it focuses on the boy fleeing with his natural birth father Roy, played by Michael Shannon (aka General Zod in Man Of Steel), and Roy’s friend Lucas, played by Joel Edgerton (who some of you may best remember as the younger version of Owen Lars in the Star Wars prequels). They hook up with Alton’s natural birth mother Sarah, played by Kirsten Dunst, because they need to get the boy to specific coordinates by a certain time. The film is presumably called Midnight Special because the boy can only stand to be up and about in the hours of darkness... as far as we know at the start of the movie.

However, the four are 'fleeing' to these coordinates because they are being aggressively pursued by two factions who want the boy. One faction is The Ranch... a religious group whose chief, played by Sam Sheppard, uses the boy’s words when he has ‘lighty up eye fits’ for his sermons. The people in The Ranch believe that the boy is the new messiah who will keep them safe if he is with them when Judgement Day comes... which they think is just a few days away.

The other faction who are pursuing, not as aggressively but certainly more effectively, is the FBI. They want the boy because the words he has been blurting out when he ‘goes into one’ and which Sam Sheppard has been using for his sermons, contains top secret information and they want to know just how the young ‘un got the intel and what the heck he is. They’re actually better at their pursuit because a young specialist called Sevier, played by Adam Driver (aka Kylo Ren in Star Wars - The Force Awakens), has joined them and has figured out that part of Alton’s words are coordinates.

And so we have a road movie with a mystery at it’s heart as the family and their friend try to survive and get Alton to where he needs to be in order for... something... to happen. Is it the approaching Religious apocalypse? Is it some alien weirdness? Or is it... something else? Well I’m not going to spoil that for you here but I will say that the writer/director certainly doesn’t cop out on the ending of his film. You will see... stuff. And if you think about it a little afterwords and dwell on the last second or so of the very last shot, it does all make a certain kind of sense, although one or two interpretations could come into play here. I’m still puzzled by one specific aspect of something that happens three quarters of the way into the movie so... maybe I should watch it again at some point.

In terms of performances, the film is terrific, with Shannon, Edgerton, Dunst and Lieberher all doing a terrific job. As does Adam Driver, who I completely hated in Star Wars - The Force Awakens but who does an outstanding job playing an immensely likeable person here. So I feel a lot better about seeing this guy in stuff from here on out. The acting is all very low key too and the cinematography and the way the camera rambles smoothly around the scenes matches this. In fact, it’s so low key that, despite the gripping mystery at the film’s fiery heart, I noticed it was having an almost soporific effect on me in some places. It’s kind of interesting actually because it reminded me of something I saw years ago in a fake Steve Martin documentary. Paul Simon asked him if he thought a sad subject in a song works better in an upbeat tempo, or some such thing. It got me thinking about the relationship between the message and the messenger and how a seemingly inappropriate delivery style can actually enhance the original message. I guess another cinematic equivalent might be the invocation of Singin’ In The Rain in Stanley Kubrik’s version of A Clockwork Orange.

Well I think that’s one of Midnight Special’s strengths... and it’s a very common approach in certain strands of science fiction, although that doesn’t negate it’s impact here... is that the acting and shooting style are quite dialled down in order to give a certain weight or credibility to the extremely fantastical concept it’s trying to sell to the audience. If you want people to suspend disbelief and buy into these kinds of concepts without any irony so the drama of the subject can be brought into play, then downplaying the absolute gobsmacking premise of your story springboard is as good a way as any of doing it. Not the only way but, it’s obviously the way Nichols' has chosen to go here and it works very effectively.

Another thing which contributes effectively to the overall atmosphere of the thing is the score by David Wingo. It’s fairly stripped down and not something which relies on dense orchestration... I would definitely call it transparent writing... but it does have a main theme which hooks you in right from the start and keeps coming back at certain points in the movie to cement everything together. It’s a pretty good score and, although it’s not the kind of score I would normally listen to, I’ll probably be picking up the CD to this one at some point in the future, to be sure.

So that’s about all I’ve got to say about Midnight Special. It’s a short review for a short film but I was surprised by just how effective it was and I certainly didn’t feel cheated by the solution, such as it is, of the mystery of Alton Meyer. There’s even a hint of how the story could possibly carry on contained at the very tail end of the very last shot... although, again, that shot is open to interpretation and I certainly wouldn’t want to see the producers wreck the memory of this movie by making a sequel, at any rate. However, if you’ve got nothing better to do with your time at the moment, I would say that Midnight Special is one of the cooler films playing at your local cinema at the moment. So maybe give it a go if you are at a loose end. After all, with General Zod and Kylo Ren in the movie... anything could happen.
Posted by NUTS4R2 at 12:09