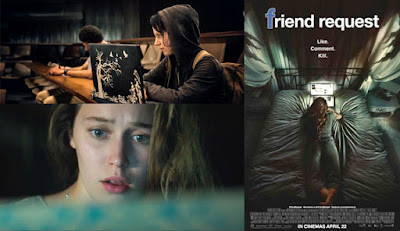 Friend Request is another in the recent sub-trend of horror movies produced that are using social technology apps, popular with their core target audience, to drive the plot forward. This is not to be confused with another movie from three years ago with exactly the same title (remind me why they keep doing this again?). It’s also, surprisingly, not quite a repeat of the Skype based, real time movie Unfriended (reviewed here) from last year and, although it’s shot in a much more conventional, narrative mode, it doesn’t harm the material and brings the media into a standard Hollywood style of movie making which allows the director and writers to explore different aspects of this kind of tale.

Now, I kinda liked this movie, for the most part. I could say that this is yet another in a long list of cliché ridden, teen slasher style horror films, where a supernatural presence is causing the deaths of various young characters until it can be either stopped or, back in fashion again, left undefeated to win the day.  This is indeed, as it happens, what this movie is but, I have to say, it’s a pleasant surprise when you find yourself watching one which is put together with a certain amount of competence and panache, so that any clichés it does fall back on are handled in such a way that you don’t really feel let down by them due to their flawless execution. Don’t get me wrong, Friend Request is no It Follows (one of the great teen horror movies of recent years - reviewed here) but it’s certainly no Ouija either... thank goodness (reviewed here).

The film is pretty well acted by all the principal members of the cast, which is not always a given when you get movies like these with a teen ensemble, trying to convince you that their lives are worth living and that you should be rooting for them. In fact, the kind streak in the main protagonist Laura’s heart, as played by Alycia Debnam-Carey, is such that you will actually find yourself sympathising with her and the majority of her friends throughout the movie... which is often half the battle in films of this kind. I’ve seen so many teenage horror flicks over the last few years where, honestly, I’d just much rather the serial killer/monster/witch demon from Hell would just hurry up and kill off all these annoying teenagers so the occasional film like this where the characters have my empathy from the outset really helps lead me into the story at the heart of the film.

This one involves a strange girl at Laura’s High School, Marina (played by Liesl Ahlers), who nobody likes and who tries to befriend Laura, in real life and on facebook. The social media in question never seems to be actually named or identified in the film, unless I missed it, which was kind of odd in some respects although I can see why the company might have had a problem with that, in this case. So Laura befriends Marina who then immediately becomes one of those people who get way ‘over-friendly’, way too quick. So, eventually, she ‘unfriends’ her and Marina hangs herself dead over a fire in response to this... and sends Laura the video. However, because Marina is using ‘supernatural forces’ the video and lots of other stuff, start posting from Laura’s account and this kind of thing keeps happening, as Laura’s friends are killed off one by one by the ghostly apparition, as the demon spirit of the girl tries to get her down to zero followers.

Oh, okay, that sounds really absurd now I type it but, as it happens, the director and writers are skilled enough to make this all work and, as we are kept appraised of Laura’s plummeting follower account, as it’s superimposed onto certain compositions at key moments in the movie.... while Laura’s friends are getting ‘creepy, lethal stuff’ happening to them.

Now, it has to be said, the manner of the creepy, lethal stuff is actually one of the reasons why this film feels a little superior to many of the similarly themed horror pictures at the moment. The artistic animations and imagery which at first appear to be the work of Marina are quite dark and surreal, almost belonging to something like the Silent Hill video games as opposed to something like this, and it really gives the movie a whole other level which will keep you watching. It gets quite creatively bleak at times and certainly a lot of the key audience for this kind of movie will maybe find themselves taken aback by the level of the imagery, I suspect.

There’s one big problem I had with the movie in that, once I understood the motivation of the antagonist element in the picture, say after the first half an hour, I was pretty sure I knew what the last few shots of the movie were going to be, content wise. And, yeah, as it happens, I was right on in this case, in that the ending of the film is completely predictable and it does exactly what you expect it to. However, since I quite liked that kind of ending, I wasn’t too disappointed and there are a couple of reasons why I am quite happy to forgive it this... other than it’s the perfect ending for this kind of material.

One is that, as I said earlier, it’s very well made and well edited into a coherent whole. Even though it certainly consists of a number of set pieces glued together, the cement and story content which does this doesn’t feel shabby or lack the integrity of its starting point, as it does in some films of this ilk.

The other reason. however, is that there’s already a nice moment, bordering on a twist, which I can absolutely kick myself for not seeing coming,  happening maybe 20 minutes before the end of the picture. This is when one of the characters realises there’s an alternative way to play the demon spirit, or whatever it is, at its own game and pulls an unexpected move out of his bag of tricks. I don’t want to spoil this and tell you what that is and, perhaps, the logical point that this character has reached gets a little unnecessarily over-enthusiastic by the end of the movie... but I really appreciated not seeing that little moment coming when it did and I think it says a lot about the directors ability to successfully distract me at that point, to be sure. Where he didn’t distract me was the umpteenth time I’ve seen the ‘open fridge/cupboard door’ routine used to build suspense and then deliberately not pay it off at that moment... that kind of scare seems to have flip flopped around a little in the horror genre just lately, I’ve noticed.

Asides from that, though, a wonderful film with a quite good, not quite to type, score by Gary Go which, unfortunately, is only available at the moment as a download and not as a proper CD... so I’ll have to reluctantly give that potential purchase a miss again until the company in question realise that good music is worth putting out in a good format. Downloads and vinyl just don’t cut it, people.

However, a quite respectable entry into the teenage horror genre with some likeable characters, for once, some great acting and a genuinely eerie atmosphere invoked throughout. If horror movies are your thing then Friend Request is definitely something you should put on your ‘favourites’ list. Don’t unfollow this movie until you’ve taken a peak at its profile.
Posted by NUTS4R2 at 19:20