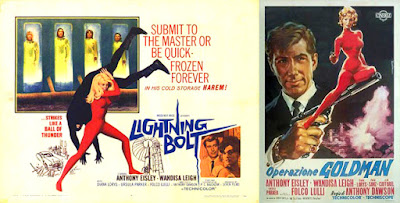 Wow. Are there really any words I can use to describe just how awful this movie turned out to be?

I bought this as a special order a couple of years ago and it’s because I just assumed, from the artwork, that this was one of those awful Italian superhero movies I can have a lot of fun with. The poster shows a red lycra clad, amply endowed blonde lady... judo throwing some kind of masked ninja. I mean. c’mon... who’s not going to go after a film that promises a buxom superheroine meting out justice to an army of masked blokes. A similar poster I’ve recently discovered under another of the film’s release titles, Operazione Goldman, similarly features the red clad blonde lady at rest on the barrel of a gun belonging to the leading actor.

I’d like to say that either of these posters is a good representation of what’s in the movie but, truth be told, there is no blonde, red lycra clad super lady to be found in this one in any shape or form... unless you count the main character’s not so blonde boss, ‘never clad in red lycra’ lady, Captain Patricia Flanagan (played by Diana Lorys), who only seems to be in about of the third movie. And she just seems to be there purely as eye candy for the other characters to look at and act surprised that their government is employing the services of one of the fairer sex. The only other things she does in this movie are get in trouble and be a damsel in distress for the main protagonist, not-so-superspy Harry Sennet (played not so convincingly by Anthony Eisley) and, in one scene, shoot a not so prominent villainess played by Wandisa Guida in the back to stop her from killing Harry with a squirty acid gun. In fact, you could just as easily use this poster and change the title to, say, one of the Star Wars movies and it would still have as much resemblance to the movie it is trying to advertise as it does here. Which is, of course, absolutely nothing.

What can I say about this film? I’ve not seen that many Italian spy movies, yet, but this one... which is presumably called Lightning Bolt to cash in on the previous year’s James Bond title Thunderball... has surely got to be one of the worst of its kind... I hope. There are movies which are so bad they’re good... a pleasure to spend time with as you watch the cast and crew stumble around and try to fashion what they’re doing into a fairly coherent viewing experience but, in the case of this one, I have to say that it’s just bad, period.

The story seems to involve a plot very similar, pretty much stolen in fact, from the movie version of Ian Fleming’s Dr. No... the idea of toppling rockets. The reason that the supervillian here is doing it is because he wants to reach the moon first and control mankind with the threat of his giant, moon based laser rocket. So, you know, he needs to stop everybody else from getting there first so he can get his mad laser of death built in the most effortless way possible. Did I also mention that this man is the owner of his own worldwide beer company? His lair is in one of his factory warehouses and... yeah... so there’s that.

We see two people exploring what could be the underwater cause of the rocket toppling early on as one of them goes down to investigate a giant dome. Two mechanical arms come out of the dome and then they... ‘something’ him to death. I couldn’t quite work out what was supposed to be going on here but the diver was obviously having a hard time as he was reacting to what looks like something that should probably have been added in as a special effect later... I’m guessing. So, whatever it is that the arms held... lethal electricity or strange beams of death defying otherness... they’re pretty much an invisible version of that and I’m sure that must have helped the budget tremendously. Doesn’t help the audience much but... hey... at least it was a cheap death.

The guy left in the boat above is presumed killed when it explodes for some unknown reason. Luckily and inexplicably, he is a very clever scientist that the villain somehow manages to save and who he can use to develop the laser he wants to install on the moon for him. Seriously? What kind of plan is that? Do these guys not go to Supervillain Business College where they can find out about the simple things like not spending a load of their beer profits on building a rocket to the moon before they’ve actually finished developing the laser they’re going to put up there? This makes no sense.

Anyway, red headed Harry Sennet is sent to investigate. He was supposed to be blonde but, from what I can gather,  when they tried to dye Anthony Eisley’s hair that colour it just went red instead. So.... anyway, his voice-over narrative provides clues to what’s going on about 70% of the time (you can try and navigate the logic of the rest yourself) and there are some genuinely corny and puntastic lines, befitting the downmarket Bond character that this guy is trying so hard to be... at least for a while. Bits of dialogue such as when he’s asked by a poolside lady, “Do you like my tan Harry?” to which he answers, “Tan-talising.” Or his unfettered wit when he informs the audience about a possible romantic conquest like this... “She carried around a silencer. Her husband, Archie.” But after a fairly short time the dialogue just pitches down to an even lesser level of banter than this and the voice-over moments become fairly interminable.

One of the real problems with this pun slinging and confident but beyond sexist, bottom swatting special agent is that he never really looks the part. There are some actors... Sean Connery, Charlton Heston, Angelina Jolie, Arnold Schwarzenneger, to name a few... and they look like they can pretty much handle anything the world could throw at them quite credibly... whether they actually could or not. In Eisley’s case he doesn’t, I’ll be honest, look like he is that young or fit enough to hold his own against any kind of henchman or supervillain... of any kind. I’m wondering if the producers of this movie thought so too because, most of the time, he just seems to be walking around trying to talk the villains out of his way. The one time when he does get kinda physical is when he and Captain Patricia enter... one of the most ridiculous and self defeating deathtraps ever put in a movie, I reckon.

So, the two of them get locked into a small but very tall chamber.... a set which is inexplicably re-used as a completely different room with a completely different function at a completely different location later in the movie. And then one of the wealth of completely non-functional looking pipes, which is open at the end for some reason, presumably for just this purpose, starts gushing out water and slowly, oh so slowly, filling the tall chamber. It’s a good job there are lots of pipes jutting out from the wall or Harry wouldn’t have somewhere to leave the good lady sitting while he both climbs and swims to alleviate their diabolical predicament. So how do our heroes escape? They can’t shoot their way out because the old ricochet sound effect on the soundtrack says they can’t, when they try.

Well... the first thing Harry does is climb up to the top of the chamber and plug a hole which he says must be sucking all the water into the room. Um... what? So, yes, he plugs the little hole in the top of the chamber and, indeed, the pipe does suddenly defy logic and stop gushing water. We’re through the looking glass here people! Then, the villain, who can see him and pretty much anyone, anywhere in the world with his science bending, magical view screen... tries to stop Harry tinkering with the locked trap door at the bottom of the chamber. He says to his assistant to open it if he tries to get it open again... because, um, yeah, that’ll teach him. And he does. Presumably his twisted thinking is that Harry will be killed from all the water pressure as the chamber empties him out and washes him into the surrounding landscape. Golly, never saw that completely ludicrous escape coming... as Harry just walks back into the chamber and escapes with his pipe perched lady friend.

And that about sums up the level of the movie, I’m afraid. It sounds like it could be at least entertaining, purely on a comedy level... but it really isn’t.  And when Harry finally despatches the supervillain by having him fall off a gantry to his death before reviving just in time to be rolled over by red hot magma midst all the random explosions... Harry comes out with probably the most completely witless quip in superspy history... “I didn't like your beer, either.” No, seriously. Comedy genius here.

The print is in terrible shape and while I must give a big thank you and well done to Rare Flix for somehow managing to preserve this thing as best they can, including retaining the scope aspect ratio... the print degradation kinda offsets any chance the transfer had of getting this into the realm of quality viewing. But, you know, it’s really good that they’ve made the effort because films like this are a) a useful reminder of some of the most dire films out there and b) means you can find out how much you didn’t want to see it as soon as possible, rather than spending a lifetime trying to track such a terrible disappointment of a movie down. If you like 1960s spy movies, you may just welcome the idea of seeing what Lightning Bolt is like. If you don’t have that much of an interest though... I’d say it’s fairly safe to give this one a miss.
Posted by NUTS4R2 at 12:15