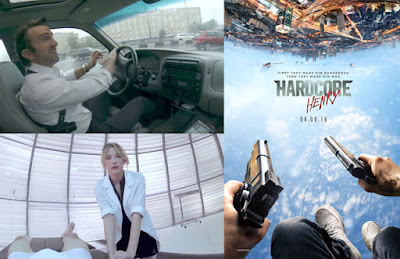 Warning: Extremely slight spoiler in here which gives almost nothing away... just a minor surprise the first time something happens.

I first saw the poster to Hardcore Henry about six weeks ago at my local cinema. I’d never heard of the film before and the title and design of the poster didn’t exactly make me want to go and see this one. I was more than happy to let another dubious action movie pass me by. However, a couple of weeks ago I watched the trailer for the movie and that changed my mind. Sure, it looked like a mindless bullet fest shot on high levels of adrenalin but it also looked completely demented and, furthermore, it looked like it had all been shot from a first person point of view. And by that I mean... imagine if you were playing an old computer game like Doom or Quake or the original Duke Nukem... the whole movie is shot like that, where you are the main character as accessed by the camera’s eye. Something we’re used to seeing in the horror genre to a certain extent but, even then, the character is usually a person armed 'with' the camera... this is slightly different in that the camera viewpoint is supposed to be the eyes of the titular Henry.

So yeah, after seeing that trailer, I was pretty much up for going to see this... although I still had my reservations. Had I registered that Sharlto Copley was in it, I would have probably crossed it off my ‘to watch’ list, to be honest... I’ve not been a fan of Copley in the few films I’ve seen him in. Luckily, I didn’t realise he was in it because, not only is the movie a fairly enjoyable one if you’re into the whole gung ho action thing but... Sharlto Copley is also really good in this. Maybe I just don’t like his native South American accent which the actor usually uses in his films... it’s possible I’ve been reacting to that in the past. Copley ditches that here in favour of... a whole bunch of other accents but... okay, I’m getting ahead of myself here.

As I said, Hardcore Henry is a first person shooter of a movie and, as it starts, we see the memory of Henry as a young boy. At least, that’s what we assume it is at the time. This is then followed by a title sequence that really sets the bar on the level of violence in the movie. Now, I’m not sure if it was just me but in terms of graphic, gory detail, the rest of the movie really doesn’t live up to the quiet ferocity of this opening credits design. I say quiet because the credits are all slow motion shots set against a soundtrack and are almost, in some ways, a spiritual cousin to some of those old Bond title sequences. However, these particular credits concern themselves with close up shots of various areas of the human anatomy as violence with a variety of implements is brutally committed to said body parts. So a slow motion knife entering a person’s neck from one side followed by a shot of it exiting, still in slow motion, from the other side... that kind of thing. I’m not someone who condones violence in real life but in art such as painting, film and fiction I am happy to enjoy it on the level that it occupies and, since I haven’t seen a title sequence quite like this before, I found it all kinda interesting to be honest. The opening credits end with the camera following the trail of a bullet which has just penetrated somebody’s eyeball. Possibly this is all what has happened to Henry before the film starts proper. These credits are pretty much the only part of the movie which are not shot in strict, first person viewpoint, in fact.

We then return to that POV camera angle when we ‘wake up’ as the title character gains consciousness. It’s clear the character is recovering from some violent procedure and that his girlfriend (Estelle, played by Haley Bennett) has rebuilt him/us as some kind of cybernetic killing machine. Now the key here is that, cleverly on the part of the writer, the character has no immediate memory of anything that has happened to get him into this state, including remembering the lady in question. He can’t even speak until she downloads a new voice into him and, just before this is about to happen, the room caves in and we meet the main villain of the piece. So Henry is silent throughout the film. People are killed and Henry has to go on the run to escape certain death at the hands of the deadly Akan (played by Danila Kozlovsky) and his endless army of trained killers. Luckily, every time Henry is on his own, the plot unfolds just a little more and he stumbles onto someone who can help him, to tell him the next bit of his mission, whether that be keeping himself charged up and alive or... something more specific.

The first person to help him is a guy called Jimmy, played by Sharlto Copley. He doesn’t last long, though, before his brains are shot out the front of his head but, every time a new development occurs... there’s Jimmy again to help. In one guise or another. Basically, Sharlto Copley plays a number of, lets call them incarnations for the sake of this review, of Jimmy over the course of the film and each Jimmy is a different variation of him... druggie, punk rocker, British army officer... that kind of thing. Copley plays them all really well and I found this constantly, recurring character with numerous South Park style “Oh my God, they killed Kenny” moments to be very entertaining. After a while, as the plot develops, you’ll also get to find out why there are so many ‘Jimmys’ and the gradually emerging picture of the world that Henry has been resurrected into is one of the things that holds the interest throughout the film.

That’s the basic set up and the structure is a bit weak, to be honest, in that if it didn’t have a back story to the situation evolving in the background... well it might be a bit of a dull film after a while. I actually thought, before I went to see this, that an hour and a half of first person style, non-stop action would get a bit boring as it wore on but the director is quite good at keeping the momentum and interest going throughout the whole of the movie... somewhat surprisingly. This includes some ferocious edits to the footage that allows the director to cut to a later moment in a scene without losing the audience in terms of what’s going on... he can eliminate the unnecessary bits without it being a major jolt on the visual cortex and, again surprisingly, the action sequences are really easy to follow, even when they are at their most frantic (which is quite often). Having the odd gimmick like overlapping subtitles to convey a chatter of voices doesn’t harm the movie either... although I wonder how that moment must play out in other markets around the world.

I did have a couple of problems with it, one of which is the structure of the forward momentum of the picture. There will be a mindless but mostly entertaining action sequence... then we’ll get a few minutes of calm where one character explains a little more of what is going on. However, as that situation  carries on it will always suddenly conclude with some kind of violence or explosion or occurrence of extremely aggressive mayhem... which will then lead into the next action sequence before another bit of calm. Stop... repeat. The whole of the movie works in exactly this fashion, one scene after another, even throwing a Frank Sinatra musical number sung by various Jimmys singing alternate lines, at one point, before the violence suddenly erupts out of the blue again... and it’s a shame that this kind of repetitive structure was used all the way to the end, to be honest. It’s just enough of a calm before each storm to hold one’s interest but I can’t help but think what the impact of some of the action sequences would have been if there had been more downtime in between punch, crunch, slice and dice sessions. Probably a lot more potent, is my guess.

The other problem I had was with the main bad guy, Akan. Kozlovsky’s performance is fine but the villain, with his all powerful psychokinetic powers, seems somewhat out of place in the narrative, it seems to me. Perhaps more suited to being plucked out of a Japanese manga and rendered in an anime rather than finding himself grafted onto the narrative here. Still, I can see that when you basically have a title character who slowly finds his feet into being a kick ass killing machine, you have to have a villain who he can’t just knock down in 30 seconds flat and I’m guessing the writers introduced the concept of a villain with superhuman powers precisely because of this. Personally, I found it a little intrusive into the narrative style of the rest of the piece but... yeah, it didn’t spoil my enjoyment of the movie too much, it has to be said.

Ultimately, Hardcore Henry does exactly what it says on the tin. If you like considerably over the top action thrills and a fairly proportionate dose of blood and guts in the mix, then chances are you’ll have a blast with this movie. Not exactly the best action film I’ve seen but it certainly has its moments and action fans will not want to miss out on seeing this one at the cinema... so give it a go, maybe.
Posted by NUTS4R2 at 19:27