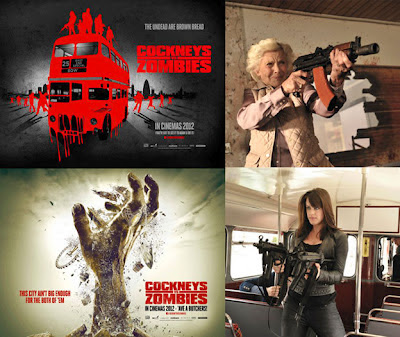 Warning: ‘Ere, there’s bleeding spoilers in this review,
so if you don’t want to know what’s coming, you’d better scarper!

Well... since I could only find this movie playing in Central London, I was expecting to be a little disappointed with it, figuring if it was a competent film it would be playing at my local multiplex. But I loved the trailer and I really wanted to see this one, so I braved the streets of London once more. As it turns out, I’m really glad I did.

Cockneys VS Zombies, like a lot of movies with the abbreviation VS in their title, is one of those films that delivers exactly what it says on the tin. That the film does so with such stylish panache and good humour is just the icing on the cake.

Two brothers, Terry and Andy, their cousin Katy (played by Michelle Ryan of 4321, Doctor Who, The Bionic Woman and Eastenders fame) and a couple of accomplices, go off to rob a bank in an effort to get enough money to stop the old people’s home that their grand-dad runs from being demolished. Due to a freak of timing, their expected haul of thousands of pounds accidentally ends up as 4.5 million... but they are cornered by the police and have a nutter in their gang who just makes things worse.

Luckily for them, this occurs on the same day as a local building site excavation uncovers a zombie infested tomb which starts to infect the whole of the East End of London. With the military sealing London off it’s up to our team of rag tag cockneys to grab the money, tool up with weapons from their “colleague” Mental Mickey’s lock-up, rescue the old people from their granddad’s home and then fight their way out of London. And if you think this little set up is ripe for comedy mayhem and oodles of gory violence, then you’d be right. Cockneys VS Zombies delivers in spades (quite literally in some scenes) as the group bungle their way through to rescue the old people, played by the likes of Richard Briers (his star turn with a 9mm Uzi taped to his zimmer frame will be something I’ll remember for a while), Honour Blackman (who proves herself still able to nicely wield a machine gun), Dudley Sutton (wheelchair guy with a shotgun riding... er... shotgun) and Tony Selby (you’ll believe a man can batter a zombie to “undeath” with his artificial leg).

The real star turn of “the old buggers”, as I shall affectionately refer to them, is Alan Ford as the war hero grand-dad. He is totally gung ho and a flashback sequence to the second World War where he single handedly takes on a small bunker of Nazi’s will both have you in stitches and visually demonstrates everything you need to know about his character.

There’s also both serious tension and comedy to be found with the psychotic Mental Mickey, who you do no want to get on the wrong side of. Both living and undead need to watch their step where this guy is concerned, but there’s also a couple of inventive zombie genre gags I’ve not seen before connected to his character. Doesn’t mean to say they’ve not been done before... it’s just that I don’t remember seeing them before...

The first gag is when Mickey gets bitten in the arm and Michelle Ryan blows the zombie away at the head. However, the teeth and jaw bones are still left in Mickey’s arm for a while until he can find a way to get them forcibly open.

The second gag takes place once Mickey has “turned” into a zombie, as you know is going to be inevitable. When our heroes try to kill him off with multiple gunshots to the head, the bullets just blow away the flesh and bounce off his head, revealing the metal plate in his head that he’s had since his recent experiences in the military. It takes a little while to get rid of him.

All this and a few more good, visually inventive zombie themed gags make the film a pleasure to watch. They even had Chas and Dave turn up for good measure, singing a catchy refrain on the end credits of the movie quite apart from their cameo spot...

Catchy... it gets almost as infectious as a contaminated zombie bite as the credits wear on and if you’re not careful, you’ll be singing it in your head as you come out of the cinema, just like I was.

The film is typical of a zombie film in that, when the humour is originating from the zombie angle, as opposed to the cockney angle, the comedy is pretty dark and there’s a spectacularly non-PC shot in the movie where a zombie-toddler get kicked across a yard and hits a target on a sign reading “Targetting child cruelty.” Bleak, but hilarious within the context of the surrounding scene. The comedy scenes are, naturally, hit and miss but this film did make me smile quite frequently so they are certainly doing something right. The action sequences, too, are not edited too choppily and everything makes sense, with no confusion as to who is doing what at any one time. As is usual with these kinds of films, no explanation or interest is given as to why the protagonists have a zombie outbreak on their hands but, if you’ve seen enough of these things as I have, you’ll know that this isn’t really a problem.

The ending on this one doesn’t disappoint either and it’s a much more optimistic film in tone to what you normally get on these affairs. One thing I will say though is that this movie should have got a wider distribution. If they’d have showed this at my local for a few weeks I’m sure word of mouth would have got around and ensured a big turn out down my way. If you’re a lover of zombie movies, this is easily one of the more watchable and enjoyable ones on offer (which, given just how many of this genre are made every year now, usually on a tight or practically non-existent budget, really is no mean feat). The cockneys in the movie, old and young, are all great little actors and this work deserves a bit more recognition than it’s currently getting, I believe. It’s a British movie and it needs some support. I reckon this could do really well in the US if the marketing is handled correctly. A great little treat for all fans of the shambling undead.
Posted by NUTS4R2 at 20:07