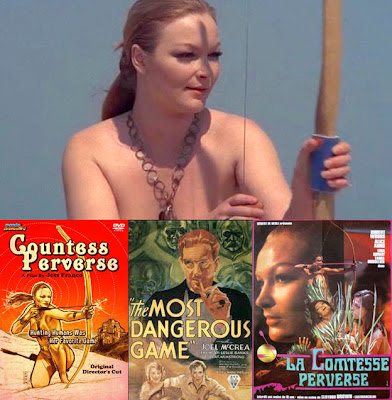 Okay then, The Most Dangerous Game, aka The Hounds Of Zaroff, was first published as a short story by Richard Cornell in the Collier’s Weekly in 1924. It was made into a movie in 1932 and used the same sets as the Skull Island sequences from King Kong, shooting on them at night while King Kong shot during the day (presumably, King Kong’s 1933 release date was due to the vast amount of special effects sequences that were needed to finish the film). Bearing in mind that two of the actors in the movie, Fay Wray and Robert Armstrong, were also shooting in King Kong during the day, I’m guessing they were on something a lot stronger than coffee to keep them on their gruelling schedule (I’m just guessing, don’t quote me on it... I just know what Hollywood studio practices were like in those days).

It’s an entertaining film but also a very important one because it was hugely influential and has left its mark on a variety of films over the years. That is to say, the story has been appropriated in many an official and unofficial remake both at the cinema and as TV episodes of long running series over the decades... the last variant of which I remember seeing being the fifth installment in the Predator series (reviewed here). It’s a very simple story. A man and a woman are shipwrecked on an island owned by one Count Zaroff, who is the world’s greatest hunter and who releases his captive “guests” onto the island in order to continue to feel the thrill of the hunt of “the most dangerous game” in the world... his human prey.

Jess Franco’s fast and loose reworking of this concept, Countess Perverse, at least acknowledges its roots while gifting the film with a huntress, Countess Zaroff with her “side kick”, of sorts, being her husband Count Zaroff.

Now then... I’ll get my little grumble about this movie over with and out the way first, okay?

Did Jess Franco, the people marketing this film or, frankly, anyone who was watching it, actually know what the word “perverse” actually means? Obviously not, I fear. As any reader of Edgar Allan Poe’s story The Imp Of The Perverse will tell you, the word means “willfully determined or disposed to go counter to what is expected or desired”, which is why Poe uses it to describe the action of confessing one’s sins instead of allowing oneself to get away with whatever one has successfully kept hidden. It is not, in any way except in application of the words meaning to a specific sentence dealing with sexuality, a term connected to that of sexual perversion. So calling your film Countess Perverse when what you really mean is “Countess who’s really into kinky, sexy stuff”... really doesn’t make sense now, does it? Get it right!

I always find his particular brand of sexploitation and trash “classics” to be somewhat hit and miss, despite Orson Welles once calling him the best assistant director he’d ever had (the two had worked together on Welles’ adaptation of the stage distillation of Shakespeare’s Henry IV, V, VI and Richard III... Chimes at Midnight in 1965). However, this particular Franco film, in a truly startling, crisp and shiny bright transfer by Mondo Macabre, of an unbelievably gorgeous print, has to be among my favourites... right up there with Vampyros Lesbos, She Killed In Ecstacy and Female Vampire.

Starting off with a flashback sequence told to a couple by a naked woman they “find” washed up on their beach, who has somehow managed to escape the Zaroff’s ideas of deadly entertainment, it soon becomes clear that this other young couple are the ones who supply the Zaroff’s, on their island retreat, with plenty of "fresh meat". I guess you could call either of them... the pimp of the perverse (thanks Edgar). And fresh meat, is exactly right, as it turns out, because Franco’s additional twist to the story is that the hunted game are eaten by the Zaroff’s, who first feed some of their, usually female, last victim unknowingly to their new guest before having sex with her, between the two of them, as a prelude to revealing their sinister nature and their particular “rules of the game”.

The young couple, who supply them and who are looking to get out from under the Zaroff’s employment, also have a penchant for menage a trois style sex and get it on with the survivor before dumping her back on the island for the Zaroff’s. However, when a new young thing played by LIna Romay, who was a very important companion and constant star to Franco right up to her death earlier this year, turns up as the potential next victim for the Zaroffs, things start to go a bit wrong for everyone. One of the couple, Tom, gets quite attracted to Romay’s undeniable charms... and, of course, the three way sexy shenanigans with her kind of clinches the deal and sets up the end of this movie.

The ending is great, by the way. 15 minutes worth of Countess Zaroff, naked except for her bow and arrows, stalking a nude Lina Romay through the long grass of the island. To say that the actress playing the Countess, Alice Arno, is breathtaking beautiful, would be an understatement. Her absolutely gorgeous body with red hair in all the right places is just one of the seductive birthday suits showcased in the film. If you are into watching Franco’s films for the nudity aspect, then this one is one of his best. It’s also worth mentioning the young Lina Romay again. She’d worked with Franco before, and I suspect they became an item very quickly, but she’s really meant a great deal to him in his life after his first actress/muse Soledad Miranda, died very young, very shortly (I think within a day or so in a car accident) after signing a big American studio contract. Lina Romay became the thing Franco most needed her to be in his movies, someone who could play both achingly innocent or the personification of sadistic corruption as needed... sometimes a little of both in films like Female Vampire. She acted in 120 movies, most of them for Franco, who has directed 197 films to date (his new one is still in post-production).

Looking at this movie, Franco’s shot design is crisp and elegant, even in its intended original aspect ratio of 1.33:1 (aka 4:3) and he manages to get away with a lot of stuff which I’d usually deem bad practice myself such as fairly fast zooms in and out of shots, without killing the swinging mood of the piece or popping you out of the action. I could watch this again every year, I think, without getting bored with it... which is why I was so surprised to find, in Mondo Macabre’s excellent notes on the film, that this was only one of "twelve movies" that Franco directed that year. Twelve! Busy period. I’d heard he’d had a nervous breakdown or two during his time... directing that many feature films a year and maintaining a reputation for bringing them in on time and on budget, it’s really no wonder.

Countess Perverse is an enjoyable romp and I’m really glad I bought this one. It’s a piece of fluff but it’s an extremely well shot piece of fluff with a transfer by Mondo Macabre (still one of the all time great DVD labels) giving it an excellent presentation. This one deserves to be on every Francophile’s must see list... and it’s also a good one to start off with if you’ve never seen any of his films before, I suspect. One of the best DVDs I’ve bought all year. Thoroughly enjoyed it. Check it out.