The Saint In London 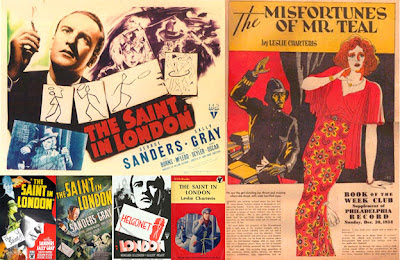 Well that’s more like it George. This third outing in the original series of films is Mr. Sanders second go at the role and, well I’m warming to him much more after seeing this. His second crack at Simon Templar is, indeed, cracking ;-) and the fast paced action of the plot is matched more mercurially by Sanders whereas, in the previous film (reviewed here) he was a  lot more sedate, even lazy, in the role and it came off, to me, as something of a mismatch for The Saint.

With Simon Templar returning to London, you’d think he’d have a chance to settle down for a while but, right from the outset, this is an action packed ride with full on, wisecracking, 1930s screwball style dialogue which is as much to do with the original stories these films were based on as it is to do with the cinematic landscape contemporaneous to these movies.

Within the first few minutes, The Saint has whistled his famous ‘signature melody’, carried over from the last film, caught out a pickpocket in a brilliant bit of playful sleight of hand, hired said pickpocket to be his butler and assistant, and then picked up with an old female acquaintance who will join him in his adventures in this movie... his additional, ‘unofficial assistant” who becomes so because she saves his life at least once.

The action is tightly paced but very focused on telling the story and the quickfire delivery is polished and subtle in its writing... and more importantly... Sanders really keeps up with it this time. I actually found him a joy to watch in this one... which was a bit of an improvement on my perceptions of him in the last one and a massive improvement on the way I usually see Sanders. I’m beginning to believe in him a bit more... and am keeping my fingers crossed that George holds that performance in the next few (it’s been years since I last saw these... literally decades). This director really knows how to play to Sander’s strengths, it seems to me, and it’s interesting that he also directed some of The Saint’s 60s TV adventures and had a dedication written to him in one of the original novels... Leslie Charteris obviously thought a lot of this director.

We also have the first bona fide screen appearance of The Saint’s original “reluctant ally”, Inspector Claud Eustace Teal, played here by Gordon McLeod, who really does make a great version of him. He reprised the role a couple more times in this series for RKO. Like the American counterpart to this character from the previous two films, Inspector Fernack, he is supposed to be after Templar but then lends his aid when he realises The Saint can help him find the real bad guys in the movie.

And as bad guys go, the leader of the set up is not a fool and almost a match for The Saint and his rag tag gang of friends. He feels dangerous, which is just the kind of man you want as an opponent to Templar and it would be true to say that all of the actors and characters in this film are, perhaps, little known but certainly very good at elevating the tension and highlighting the bubbly humour inherent in the script. A nice piece of work all round in this one and the film-makers even remember to put the steering wheel on the right hand side of the cars for a movie set in London... which is quite handy. Of course, if the film hadn’t actually been called The Saint In London then I probably would have been less wiser as to where the action of this one was supposed to be taking place. I doubt if any of the crew actually got over to England for this one... although I might be wrong, I guess.

Frankly, it doesn’t really matter where the movie was shot in my book, because when you’ve got great, quotable lines like, “It ain’t no water pistol, so watch out where you squirt that lead!” right from the word go, then you know you’re in for a treat of a movie. Definitely looking forward to watching the next one.