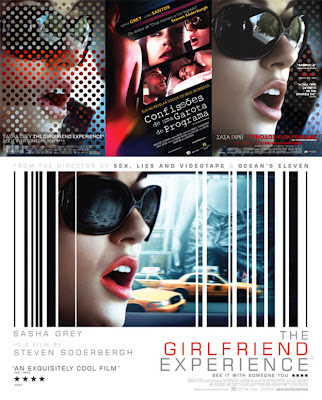 Yeah, okay. I apologise for the review title but everybody else is doing it and I saw the opportunity, okay? I want readers as much as the next blog!

When I first heard that notoriously extreme porn princess Sasha Grey was making a mainstream movie, my attention was immediately captured. My eyes further lit up when I heard she was making it with Steven Soderbergh at the helm, a director who actually knows how to put together a compelling movie... despite me still being angry at him for once sacrilegiously daring to remake something directed by the true poet of cinema, Andrei Tarkovsky. What was almost icing on the cake was that the movie was to be called The Girlfriend Experience, which is a service some escorts offer to their clientelle and which signifies a fake emotional shell of a relationship with the various escorting activities provided as part of the transaction. This sounded really intriguing.

And then it didn’t even come to my local cinema and somehow slipped in and out of the London cinemas, if it was even released at all in this country, without me even knowing about it. Which seems to be a current trend with most movies I really want to see these days and which really, to be honest, makes me angry with both film distributors and cinema chains over here.

And then, of course, I promptly forgot about it.

When I finally remembered about this movie the other day, three years after the fact, I leapt into action and "blind bought" a really cheap copy from Amazon. And that’s what happens when bloody distributors fail to make a film available at the cinema... you lose out on potential box office... the DVD was, by now, way cheaper than a cinema ticket would have been.

And so I watched it and got something both less and more than I was expecting.

I expected Sasha Grey to be absolutely brilliant in it, for example, and I was spot on with that prediction. She is. Really good at delivering what is probably a quite tough and naturalistic style of acting for a film which takes a fly on the wall kind of cinema verite as its main method of capturing the incidents which come to make up the overall picture of a small slice of an escorts life... the “action” of the movie takes place over a time period of less than a week. I expect a lot of the stuff in this film is improvised somewhat for certain scenes during rehearsals and kinda gone with or rejected as the cameras roll (although I’m just guessing here). Either way, as far as I’m concerned, Sasha Grey proves she’s a real lioness of an actress here and I hope she gets some more mainstream work as time wears on and is not ignored as all too often happens to people from her background genre.

On the other hand, I was expecting a movie with more plotting or resolution to it, at least in the dramatic sense... but that’s not quite what I got either. To say that The Girlfriend Experience is a drama is to both do it a disservice and to set up expectations in the viewer which the movie won’t live up to and I suspect, more importantly, aren’t supposed to fulfil. The Girlfriend Experience is less a drama and more of a lesson in transmitting and receiving information in a way which allows the human brain to appreciate what might seem obvious and undemanding at a level which allows the richness of the captured moment to shine and echo in your consciousness.

That is to say, the film is edited quite elliptically, more so than something like, say, Soderbergh’s The Limey and, as a consequence, you have to keep pausing in your mind to put what you know about who you think are the main players in this into some kind of linear order. I’m no stranger to this appproach to film-making, of course. Hey, I’m British! I was brought up on Nicolas Roeg movies, so the whole process of watching, what I shall quite obstinately label “the story”, develop all at once over the same time simultaneously, like an old Polaroid photo, is something I’m quite happy to embrace. Tarantino sometimes tries to use this approach but is more primitive, although still quite valid and spectacular in his approach to this kind of “narrative” device. Soderbergh chops his raw materials into smaller, easy to swallow, chunks and one might go as far to say that his show-and-tell approach to lifting the curtain on the process of data transmission approaches almost Godardian territory in its alienation of the viewer as part of a totally immersive experience. Then again, though, the work here is probably a lot more subtle than what Godard would have done in my preferred earlier phase of his career and once the style of The Girlfriend Experience is imprinted on the collective audience consciousness, the audience begins to adapt and get used to it and so will probably be less inclined to pop out of the movie the further into the running time they get.

The voice-over narrative by Sasha Grey takes the form of a list or inventory which details her transactions, the nature of her services for those transactions and the various consumer products like clothes and food which become part of those transactions. I think the joy in films like this is that they’re almost as much about what the viewer brings to them and sees in them as they are about any intent the film-makers have on wanting you to decode them in a certain way. So for me, her voice became the diary she keeps so she can tell exactly where she left off with each client... something I suspect an escort providing those specific kinds of emotionally enveloping experiences would need as an important aide memoire, I would expect.

Actually, it’s kind of an interesting contrast because, I would imagine, an escort has to make sure that for hereself, she has to emotionally distance hereself from her client as much as possible and the movie is put together in a way that reflects an emotionless lifestyle. All the sets the characters inhabit are very clean and tidy... almost clinical in their lack of individual character, it seemed to me. Sparse... not cheery. At the same time, the colours and lighting used to capture these cool worlds is quite colourful at times, each different colour scheme used just rubbing shoulders with the next sequence which is lit very simply and differently to the previous. At the same time the character's mindset may be reflected in the lighting in a linear path through the narrative, which isn’t how the movie is presented, and so this too may be worth unscrambling at some future point. The main protagonist, though, obviously has a strong emotional undercurrent and she gets upset and makes absolutely the wrong decision in at least one point in the movie. This is all very interesting and why I think, for me, this film may bear a couple of repeat viewings.

The Girlfriend Experience is, I should warn you, not going to be everybody’s cup o’ tea. You’ll probably get a lot more out of it the less you are expecting from it, so pull down any expectations you have of this one before giving it a spin is my advice. For instance, if you’re expecting Sasha Grey to pull her clothes off and give a similar performance to some of the stuff she got up to in her career in the porn industry (from which she has now retired and you can follow her here on Twitter if you want to see the kind of interesting projects she gets up to now) then you are going to be sorely dissapointed. There is no sex on show in this movie and maybe two to five seconds of dimly lit nudity, if that. This is a film which is more interested in exploring the practical, financial and emotional attitudes involved in these kinds of services and not a recording of the actual services themeselves. If you are cool with that and you also leave behind the expectation of a heavy, dramatic tension-release kind of “story telling” scenario, then you might want to pour yourself a glass of wine, lower the lights, put your feet up and let yourself be absorbed in this movie for a little while. You might find that the film begins to haunt you after it’s finished playing rather than hit you right off the bat. Allow your mind room to breathe with it after, for a week or two, and you might find you’ve possibly discovered a little gem.