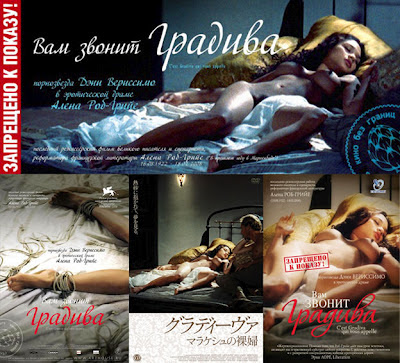 Hmmm... not too much to say about this one.

Gradiva is a very loose adaptation, I suspect more in spirit than in actual incident, of the 1902 serialised novel by Wilhelm Jensen. It uses, in the film at least, strong elements of sado-masochistic fantasy and is written and directed by Alain Robbe-Grillet, who wrote Resnai’s, quite literally timeless classic, Last Year In Marienbad.

The film starts out with a totally unsympathetic male protagonist, who seems like he’s strayed in from a Merchant Ivory film... since I’ve only seen one of those that I can remember, I was doubly surprised when, after I’d made that connection, it turned out that lead actor,  James Wilby, had indeed strayed in from some Merchant Ivory projects. Doh! Perhaps this explains why the whole film, although set in Marakech in Morroco, seems somehow polluted with a miasma of stuffy Englishness that I couldn’t really shake off.

This central protagonist is researching the works of Delacroix but he strays into an underground world filled with fetishistic and ritualistic BDSM practices and slavery. My interest was momentarily piqued when a writer, played by Arielle Dombasle, starts writing about a character in a novel she’s working on and then, as we see her main female character embodied in her minds eye, our main protagonist who was set up earlier is seen chasing after her. Are we watching “our” real world of the film or a fiction within a fiction? Alas, what could have been a fascinating puzzle-box of a movie concerning the nature of dreams, fiction and reality instead becomes... um... a somewhat less than fascinating movie about dreams, fiction and reality.

The film deals with interpenetrating layers of alternate realities and, in some ways, Last Year In Marienbad could be seen as dealing with the same issues, but it fails to match Resnais’ movie in subtlety and instead, presents us with something that seems to be an impenetrable mess. I really don’t mind the inscrutability of a text which is deliberately meant to remain indecipherable... love that approach in fact. It’s the sheer amount of mind dulling ennui which permeates the picture which kills it for me. The main protagonist doesn’t help... always finding himself in situations he doesn’t understand or control without taking any, it seems to me, pro-active or strong steps to free himself from his troubles or solve the mystery of the dream woman who haunts him in both his sleeping and waking life.

There is, to be fair, a generous dollop of female nudity presented in pursuit of a strongly S and M flavoured vibe... bloody whippings and tortures are on show but the whole thing smacks of a softcore, schoolboys fantasy of what this kind of activity might actually be like, and rarely manages to reach a true understanding of the nature of the desire which fires the trials and pleasures that can be ignited by those kinds of relationships in real life. In other words, it’s like everybody on screen is play acting about something they have no real understanding of... at least get some experience of these kinds of shenanigans if you’re going to be portraying them on screen, I say.

I can’t say that watching Gradiva was a totally unpleasant experience and I’m really glad I saw it... but I can’t imagine myself dipping into this one too often. I personally have an affinity with the pointless and undecipherable but, when such a proposition is delivered in such a passive manner, without relishing, it seemed to me, the strong brush strokes it could have been using to create the complexity of its central enigma, then I am less sympathetic and find myself watching it in a passive state rather than trying to work out all the angles in an epitome of transfixed fascination. I’m afraid this one just didn’t do it for me.

But like I said... it’s kinda nice to look at. So maybe some of you may get something more out of it than I did. Not a recommendation from me but something less than a condemnation too. It seems this very short review is as passive in intent as its subject matter. Make of that what you will.
Posted by NUTS4R2 at 20:05