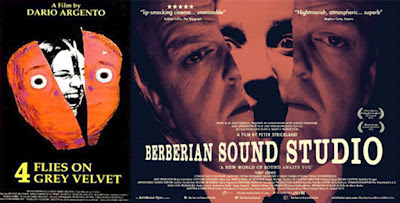 Warning: There are going to be some big spoilers here, including the ending... in as much as you could consider it possible to spoil a movie of this nature.

I told myself, and anyone else who was prepared to listen, that I wouldn’t brave London while the Olympics and Para-Olympics were on. This would give me a) time to write more and b) help me save some cash for far more tawdry and unspoken pleasures (that’ll be a book buying spree then). Well the first benefit seems to have been shot down in flames (I’m still only getting three or four blog reviews up a week) and the second option... yeah, maybe, if they’re not expensive books.

However, in the end, a new movie I’d heard only good things about, Berberian Sound Studio, forced me into the busy heart of London while the Para-Olympics were on because, frankly, I could only find one chain of cinemas in London showing the thing and none of those screens were local to me (so much for my Cineworld card, then). On the positive side, I would be seeing it in one of the better cinemas in London... which just goes to show how much I am missing the era of the Lumiere and Metro cinemas these days. So I saw it in possibly the best sound and vision equipment I was likely to have an opportunity to see it on and, also, with a crowd of like minded people instead of the usual coke gargling, popcorn munching heathens who adorn my local multiplex (I promise you... you’d have to see some of them to believe them... and that’s just the staff).

So... was my trip to London worth all the effort in regards to this film?

I’m sorry to say it, and I know I’ll probably get shot down for this but... no, not really.

Berberian Sound Studio is quite confounding in it’s own way because it is at once one of the more interesting films screening at the cinema this year but also, I feel, terribly dissapointing. Dissapointing both in it’s failure to live up to it’s hyped up expectations, which is only partially it’s fault and I’ll get on to that in a minute, and in its failure to really deliver any bite to its metatextual explorations. On the upside, it’s got Toby Jones in it as the main protagonist and, frankly, any film which has that has to have some measure of coolness to it. Hey, just found out he’s Freddie Jones' son, that’s even cooler.

Okay, so the first thing which got me interested in this was everyone referring to it as an homage to either the genres of Italian Giallo or Italian Horror.

For starters, these two genres, despite sharing some major directors working in both (and a fair few other genres), are not interchangeable and rarely cross over because, when a film starts slipping into the realm of the supernatural... it ceases being a giallo and slips into being a horror movie. A giallo is a giallo and a horror is a horror... let’s leave it at that. It really is that simple.

Now, just because I’d heard this stuff word of mouth is not the film's producer's fault, for sure... except that it does use Italian horror as its subject matter (but not it’s own composition) and the trailer (which was the next thing I watched after reading a good many tweets) is, to be fair, cut like it’s a horror movie. The fact that it was premiered at this year’s FrightFest probably does help set up expectations that it’s somehow going to be some kind of horror film too and... it so isn’t.

It also doesn’t help itself in setting up fake expectations by advertising itself with a poster that is, at least in the UK poster design’s case, a whole lot more than just a little reminiscent of one of the more famous poster campaigns for lionised giallo director Dario Argento’s Four Flies On Grey Velvet (see images above). Great poster for sure (both the Argento and the Strickland movie) but it does itself a bit of an injustice when it comes to representing the movie I feel. I thought it had a vague surrealist feel about the movie and I think comparisons to the worlds of David Lynch might be a more pertinent comparision to make, if comparisons are your thing.

The film is about, if indeed it could be said to be about anything, a British sound designer who has been called over to Italy to work on an Italian horror film called The Equestrian Vortex. After he arrives at the studio, within the first few minutes, we are then treated to the full opening titles for this movie within a movie (the actual movie titles for the film you are actually watching are saved for the end credits) and this was my favourite part of the film, it has to be said. The Equestrian Vortex credits are scored in funky 70s horror style and they have a more “British Horror” vibe to them rather than Italian, I would have said. It wouldn’t look out of place on a 70s UK TV anthology show like Hammer House Of Horror, for instance.

There are, it has to be said, sequences in the film which are a direct homage to Italian horror/giallo, but only in that the lighting style is similar to two directors who were/are key exponents of both genres, Mario Bava and Dario Argento. So there are some scenes which are lit in the kinds of bright greens and reds that you would expect from these two directors and their succesful band of imitators. But this stuff is only used for scenes which have a dreamlike quality and as the narrative (or what I shall stubbornly refer to as a narrative, at least) continues, the director starts to play with the format of the film in the good old “medium is the message” kind of way. There is (dare I say it again in another review, bearing in mind I know a review going up next week for The Girlfriend Experience will also be pushing this angle) a very deliberate and repeated use of a Godardian distancing device intended to pop you out of the movie at various scene transitions by way of a flashing “Silenzio” subtitle and scenes from earlier in the film are also replayed, but this time in an Italian dub which, perhaps less than subtly, shifts the viewer into an enquiry of the nature of the footage viewed thus far.

Toby Jones’ protagonist is disturbed by a ringing doorbell one night and after getting scared, he runs through his door, carving knife in hand, only to be confronted with the interior of the screening room of the studio, and we watch as he watches the footage of him being disturbed in the night... the same footage we just watched, of course. The main protagonist starts to disintegrate as a real character for us and, as his character is slowly eroded by repeated scenes and dialogue coming out in the script for the movie he’s working on, which we are familiar with as letters from his mother in England, it’s a temptation to say that some of the more surreal sequences scattered throughout the picture are purely dream sequences. However, the clue in the text comes when the reimbursment via the receipts he turns over for his flight to Italy doesn’t ever get paid to him. His avenue of enquiry leads him to the brick wall of his employers not being able to find any evidence that he has actually been on a flight to Italy.

The end of the film provides no real answers unless you take it for what it is. Toby Jones is merely playing a character you are watching and at the finish, this character just fades out of existence in much the same way that David Hemming’s main protagionist in Michelangelo Antonioni’s Blow Up just winks out of existence. This is not a film about narrative closure and it’s very much a spiritual cousin of the aforementioned Blow Up and some of the more subtle works of David Lynch (such as the hit and miss crowd pleaser Blue Velvet). Experimentation is much the order of the day but, alas, this old reviewer has, I think, seen it all before. There are some very well trod clichés (such as the film stock burning up before your very eyes in the projector... which I’m also pleased to be able to say I’ve actually seen happen in real life too, as it happens) and call me jaded but I was hoping to see something new or maybe even shocking/thought provoking contained in this movie. Overall I found it entertaining but less than mind-blowing.

Don’t get me wrong, there are some great moments here in this movie... but I just don’t feel the movie adds up to being more than the sum of those great moments and it leaves a very unsatisfying taste in the mouth of this blogger. However, the acting, cinematography and music are all great, or at least interesting, and my dissapointment shouldn’t stop you from scurrying off to see this movie. You may get a lot more out of it than me, I suspect. I found it to be a little over-rated but certainly of a high quality of movie making and I’m looking forward to seeing what this director does in the future... as well as catching up with what he did prior to this film. Let me know what you think of it... I’d be interested to hear.
Posted by NUTS4R2 at 16:47