Doctor Who - Dinosaurs On A Spaceship 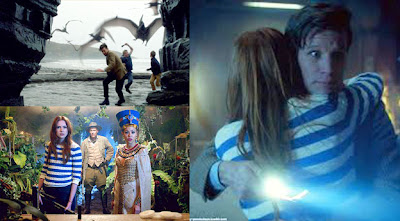 Yeah, okay. That wasn’t a bad one but, sadly, I can’t think of anything much to say about it, to be honest. I’m sure this is going to be one of the shortest reviews I’ve done here in a while. Don’t worry though... I’m bound to make up for that again tomorrow. ;-)

This doesn’t seem to be a major part of any story arc... just a standalone adventure featuring a silurian on a view screen, some CGI and model dinosaurs, some comically camp robots and a nasty villain. Oh, and an interesting group comprising The Doctor’s “gang” of companions, counting Queen Nefertiti among them, no less. The silurians are already wiped out before The Doctor, Amy Pond, Rory, Rory’s Dad, Nefertiti and a big game hunter played by Rupert Graves (perhaps best known at the moment for his portrayal of Lestrade in Sherlock) even arrive to try to turn back a spaceship full of dinosaurs heading towards Earth before our planet’s defenders destroy it with missiles.

Actually, the Silurians seem to have made a habit of being wiped out to almost extinction in Doctor Who over the years and I wish they’d bring back that damned sexy, lesbian Silurian from Victorian London who featured in the episode A Good Man Goes To War (reviewed here) because then I might have a bit more to say about this one. Still, it’s not a bad episode so I mustn’t be too grumpy.

Good things on this one were the tease of an old enemy/stroke acquaintance... who turned out ot be anything but someone we knew. Got all excited because I thought that somehow Tom Baker’s/Peter Davidson's companion Adric had somehow managed to survive crashing into the Earth to wipe out the dinosaurs and instead was flying around with some, an embittered old man. Unfortunately, or possibly fortunately depending on your take on that, it was not to be.

Also, the episode had some comedy gold moments from Rory’s dad... a man who knows where his trowel is!

The chemistry between all the actors, in fact, was really good stuff that would be good if it was bottled and sold. Nefertiti was sexy and made part of a happy ending for two of the characters. The villain was also really nasty... which made it a little less of a bitter pill when The Doctor quite deliberately sends him to his death near the end of the episode. He has done this kind of thing before, especially lately (wiping out a fleet of cybermen to get the answer to a question, anyone?) but I suspect people might raise the odd eyebrow over that one if their memory is particularly short. The Doctor may not carry a gun but he’s never been less than deadly when required.

The much publicised “riding a triceratops” sequence was lovely and the dinosaur in question was treated in much the same way is it was in the first Jurassic Park film (cutesy n’ cuddles)... as were the velociraptors which also, in this one, were strangely hunting in packs. It’s interesting how highly influential well-loved, high profile films and novels can be. It’s like a lot of our perceptions of the behaviour of dinosaurs over the last ten years or so have come from Spielberg’s first dino opus.

The real thing which did add to the overall arc of the Moffat years (as they are so far) is the continual concept that The Doctor doesn’t have ”The Ponds” as constant companions. He drops in every few months or so for an adventure and that’s it. This is slowly building up to a sense of loss and leaving as Amy in tonight’s episode introduced the concept that, well, The Ponds aren’t getting any younger. I suspect there’s going to be a marked change in the (ageing) make-up of the couple as the few weeks we have left with them go by and The Doctor is once again forced to come to terms with the length of his many lives compared to the short ones of his companions. I also get the feeling there’s going to be lots of tears being shed across the country when episode five hits in a few weeks and The Angels Take Manhattan. Don’t blink people... your tear ducts might dry out in time to say good bye!

And that’s all I’ve got to say about this one. Nicely done but somehow felt a little lacking in places. Nothing really to grumble about and a solid bunch of actors working at their best. Roll on the next one.