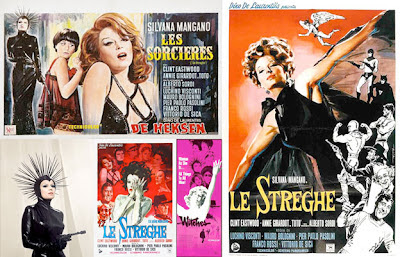 You know... I’ve been trying to see this film for quite a few years now.

It’s somewhat ironic to me that I can now, finally, buy a copy on US Region 1 DVD when it turns out that the reason I’ve not been able to see it for all these years is that United Artists have kept it suppressed all this time outside the European market (of which I am technically a part of, but our DVD and VHS releases have always been dominated by what’s available stateside). The reason, apparently, is that they didn’t want it to interfere with their new rising star Clint Eastwood’s career in his native country. Although, personally, I don’t think he did that bad a job in it.

In the absence of the film itself, I’ve had to make do with both the official soundtrack, finally released a couple of years ago in a limited edition from Digitmovies, which contains the majority of the score as composed by Piero Piccioni... and it’s a real toe tapper (I’m listening to it again as I type these words) and a hard to get compilation album of scores Morricone composed for Pasolini movies, which contains a 9 minute suite of the music from his section of the movie.

The reason I have wanted to see this movie for so long is because I read that it had Clint Eastwood taking on such famous comic book characters as Flash Gordon, Batman, The Phantom, Mandrake The Magician and Diabolik. In fact, he gets bashed about by them quite a bit.

Let me clarify that, just to let that sink in... Clint Eastwood gets beaten up by Flash Gordon, Batman, The Phantom, Mandrake The Magician and Diabolik.

So... you can totally understand why I’ve been so eager to see this one, right?

Anyway... Le Streghe is finally “out of prison” and it's made up of five separate stories directed by such luminaries as Mauro Bolognini, Vittorio De Sica, Pier Paolo Pasolini, Franco Rossi and Luchino Visconti. Seriously people! How do you take it upon yourself to suppress a movie and let it rot in a vault somewhere when its directors include De Sica, Pasolini and Visconti? What the actual bleepity bleep bleep?

So... um... keeping my rage under control here... I’m pretty sure I can understand why a studio would want to suppress a movie like this, having watched it and finding it almost unwatchable... but even so... people need to see these directors’ work on this.

The five stories in this movie... The Witch Burned Alive, Civic Sense, The Earth As Seen From The Moon, The Girl From Sicily and A Night Like Any Other... all have a director apiece and all have one thing in common, which is the fantastic actress Silvana Mangano, who I’m guessing this film was built around as some kind of showcase to her acting talent. In terms of showing the versatility and, as it happens, great beauty of this actress, the film succeeds well. I don’t recall ever seeing her in anything before (unless you count her much later role in Lynch’s Dune) but I now want to see her in anything I can because she’s just hypnotic whenever she is on screen by herself.

This is especially true of the segment directed by Pasolini and which stars and ageing Toto, an actor who was a “big deal” in his native Italy but who is not such a big name, it seems to me, over here. This segment requires Mangano to play a funny, deaf mute and she does it with such feeling, fragility and passion that you just want to watch this silent performance forever... and turn the wretched movie off whenever she’s not on. The make up and hair in this sequence is unbelievably stylised, deliberately looking like a comic strip... and even the statues in the graveyard look like something drawn by the artists of Asterix. Toto and the actor playing his son wear “big, orange hair” and the whole segment is played for laughs. Laughs which don’t come (I didn’t crack a smile too often, it has to be said) but played for laughs, nevertheless.

The only other dubious pleasure on offer, which is the reason why I wanted to see it in the first place, is the segment where Clint Eastwood plays Mangano’s boring beyond belief "square Johnny" of a husband. The character of the wife is so unfulfilled in her marriage that she keeps slipping into a dreamlike fantasy land where she takes revenge on her husband’s straight-laced ways and indifference to her. Hence, the sequence featuring the various comic book characters. The film gets ironically referential in a way that most movies weren’t in the era this one was produced... in that Clint reads a list of possible cinema trips for the evening and one of the potential films he reads out is A Fistful Of Dollars. Similarly, in one of the later fantasy sequences, he is seen in a costume which is kind of a multi-referencing parody of the costumes he wears in Leone’s films and the ones from his Rawhide days. It’s probably not something he was that happy to have done and one can see how he, and various studio executives, may have felt this role may have compromised his career a little... that and the fact that the film really is, as one person who was in the same room as me when I was watching it said... interminable.

Am I glad I saw it? Yeah, because if I hadn’t seen it I would have been chasing it for years, maybe decades. Also, I might never have discovered the young Silvana Mangano if I hadn’t seen this. Although Theroem is still on my “to buy” pile.

Can I recommend it? No. It’s incredibly dull, long winded and tedious. There are a few really great moments in it but these are just so anaesthetised by the creeping monotony that, most times, you won’t really care.

Would I watch it again? I’d say no, for now, but Mangano is beginning to haunt me a little... and the music during the Piccioni scored segments is pretty cool... as is the stupid, 60s cartoon opening credits sequence which matches the name of the film well but manages, like the title, to have nothing to do with the actual movie (there’s a metaphorical witch burning, if you look at it through a deeply skewed lens, in the first segment I suppose).

All in all I’d say stay away from this one unless, like me, you can’t die without having seen it once. And also, be warned, that screening it might kill you... as it slowly erodes your spirit. :-)
Posted by NUTS4R2 at 20:47