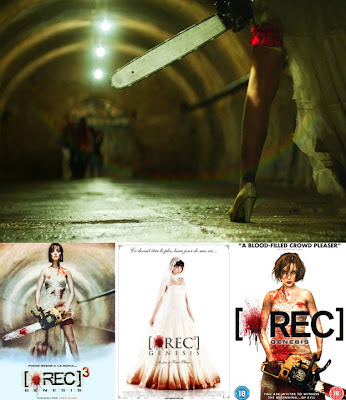 I loved the first two parts of the [REC] franchise and was really looking forward to what would be happening next in the series. I’d heard that the two directors were splitting up to make the next two entries in the series back to back... one a sequel and one a prequel, with [REC]: Genesis being the prequel. I wanted to see this in the cinema but, as is par for the course in this country, the only cinema I could find showing this was in Central London with only 9pm screenings for a week, with the DVD release coming out only a few days into that run... if that could be called a proper cinema run. It was so well hidden that I couldn’t even find the cinema showing it until the few screenings I might have been able to attend had already been and gone.

So rather than risk lack of sleep and bad performance at work the next morning for a film journey at the heart of the city to see something I could buy on a home video format for less than the price of the ticket (let alone rail fares) I did the simple thing and bought a copy. I put it on last night and was immediately pulled in to what I assumed the style was going to be for a while. At least three characters are set up within the first few minutes of the film, who are all armed with cameras which are capturing what you, the audience, sees... ready to cover the wedding of the two main protagonists... Clara and Koldo.

All hell breaks loose at the wedding reception when the groom’s uncle, who is feeling “unwell” after a dog at his surgery bit him, starts to get a little peculiar... presumably he’s the vet from the first film who was treating the dog mentioned as having carried the religious zombie/demon virus (so I don’t think it’s fair to be calling this film a prequel, since it seems to be taking place around the same time of the year as the other two movies and it certainly doesn’t cover any of the back story we know from the previous films). When he goes all chompy-chompy on the crowd of wedding guests, it doesn’t take long until you have the various revellers running around eating each other, spreading the virus, and the few survivors are inadvertently split up and looking for each other... mainly the bride and groom who are trying to get back together again.

However, there’s a big “sea change” here and I’d have to guess that this is going to really divide the fans of the series at this point. One of the cameras recording the action is destroyed by the groom and suddenly we break free of the first person shooter style of movie making which has served the [REC] films in the past (and, to be fair, given them their brand name) and into the world of standard, third person viewpoint camerawork, much the same as you’d get in most other films.

I suppose if you’re a talented director whose most well known films internationally are co-directed and shot in a jerky, hand held, camera-eye style... I’m guessing they’ll come a time at some point when you’re going to want to prove to people that you can make great movies without the gimmick of “the characters are actually shooting this themselves” angle getting in the way. So one can hardly blame Paco Plaza from going down this route in this third installment. I do, however, think this was kind of a bad move in that it really gets the film away from the spirit of its predecessors and takes it away from the rough and ready, raw and in-your-face signature of those earlier, horror masterpieces.

It really does kind of amount to a dumbing down of the narrative style, in some ways, too. The first two films, especially the second, found very creative ways to use the camera eye and make it work as an effective, almost interactive at some level, experience. Here, with the camera free to tilt, pan and cut from shot to shot... it’s almost like the film-makers are making it too easy on themselves to just follow bits of the action without challenging themselves to make clever use of scripted meetings and timelines where the “camera operators”... or at least their equipment, can catch up with each other and reveal something new about the narrative.

What’s happened here is something that’s gone from unscored, cinema verite to something which looks very smooth and suddenly has an underscore that, to my ears at least, sounded way inappropriately scored for the imagery it was accompanying. This was especially noticeable after the switch from first person to third person, though, and so I could well have been responding to the juxtaposition of the two styles and the consequences of that in terms of contrast. Even so, I would have thought that this effect would have been self evident in the editing suite or whenever the music track was put on, so perhaps the director should shoulder a little of the responsibility for this one.

Another thing which I thought was a mistake for this style was the fact that, like most directors in many works, some of the shots were using a hand held, shaky cam style to convey certain moments of dramatic tension and, even though the quality of the third person footage is better (way better) than the camera work of the characters, this did give me a funny feeling at times because I found myself trying to figure out which person the camera I was looking through belonged to, in a few places. Again, I think a little more restraint on the director’s part may have ironed out some of this first-person-jitters hangover from the opening 20 minutes.

Okay... so I’ve mentioned a few negative things about the film but, let me fill you in on what else this movie is.

Well, disappointed as I was at the direction this movie took, I’d have to say you need to cut this movie some slack and see it regardless because, in terms of the production design and the beautiful compositions that fill the screen for the next fifty or so minutes of the film, after the character’s camera has been destroyed, [REC]: Genesis is one of the most beautiful, visually stunning movies I’ve seen in a while. I was absolutely gobsmacked by the sheer artistry and talent in this one. Bearing in mind that there are some truly gory sequences and some grim irony pushed to the forefront of this movie (love the hearing aid gag), it’s amazing how gorgeous and inspired the mise-en-scene (bar the music) is. If you’re a fan of well crafted movies in general, whether they be horror films or not (and let’s face it, generally they’re not), then you owe it to yourself to get hip-deep in the gore and see just how good looking this movie experience is.

The acting in this one is first rate, as it is in all the movies in this series, but once the film breaks free of it’s original aesthetic, the director also finds time to throw in some comedy moments which were more subtle, or at least less obvious, than they have been in the past.

The downside of having such a well shot, beautiful film, however, is that, unlike the first two movies in the franchise which were a rarity for being zombie movies which were actually scary for a change, as opposed to just being body count movies, [REC]: Genesis fails in the one thing which you really needed it to be to live up to the reputation of the first two... it just isn’t frightening!

Not that it really matters these days. No great worries. Horror films aren’t usually that scary at all, only the rare handful of scary movies live up to the scare implied by their genre. And unfortunately, [REC]: Genesis isn’t one of them. However, as I said, it’s got an awful lot going for it in terms of the overall look of the film and, with the added bouts of light comedy touches and grim irony to be found here, there’s an awful lot to offer fans of cinema, especially horror cinema, in this one.

There are, to be fair, a lot of cliché moments added to the mix too and the film is, I’m afraid to say, quite obvious about where it’s going to be going next from scene to scene. This is something that I think a lot of people will find kinda off-putting but if you soldier on through it, and it’s not a hard thing to do with such sumptuous photography, then you might find yourself bowled over by the film at a somewhat technical level. In terms of being a well made, fairly memorable horror movie, this one passes with flying colours... and when I say flying colours I mean red with flying body parts, obviously. Genre fans should love this if, unlike me, they’re not too attached to the previous installments and will possibly hail this movie as 2012’s horror masterpiece and, even I, was very taken with it... certainly enough to recommend to my readers, although you’ll need to watch the first two parts to understand what’s really going on in this one and why the infected act like they do at some points in the narrative.

I just wish it had the visceral power of the first two movies though.