Doctor Who - The Power Of Three 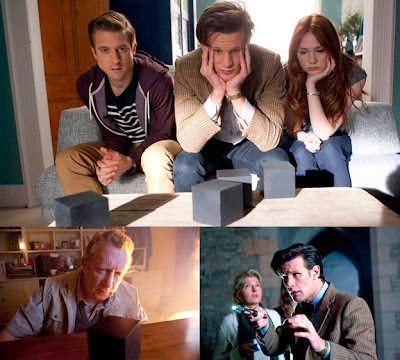 Warning: A few right angled spoilers lurking in this one.

You know, I'll be kinda relieved about not having to write any more of these Saturday night reviews once Doctor Who takes a little break from our airwaves after next week's episode. Not because they’re in any way terrible, similarly, not because I am having to heap praise on them on a weekly basis (I wish). That’s the thing though... these episodes aren’t that terrible but they aren’t that great either. The last two series especially had their share of “not so great” episodes in them... but they also had some great “stand out” event episodes in them too. This season it all feels just a little bit... I dunno... a bit humdrum?

I was expecting, quite honestly, for this weeks episode to be the best of the current bunch re-materialising onto our television screens. Truth be told though, if you’re comparing just the stories from the last four weeks, that honour has to go to the season opener, Asylum Of The Daleks. This weeks installment though, it has to be said, runs it a close second in the entertainment stakes and I have to admit I found myself well and truly entertained this time around... up until a point.

The episode had a great slow burn premise of an invasion of harmless seeming black cubes which lay low for a bit while the entire population of the planet get used to them. The Doctor, therefore, comes to stay with the Ponds and also, we see a welcome return from Rory’s dad from the Dinosaurs On A Spaceship episode... as played, wonderfully, by Mark Williams. The cubes stay for a few months or a year... depending on whether you believe what Amy Pond says in UNITs secret Tower Of London base or, if you believe the much more credible evidence of Rory’s dad’s invasion log, which lasts for over 361 days. These little and easily fixed continuity errors creeping into Doctor Who again is actually quite alarming and it should be stopped. I’m not saying it’s limited to this programme... it seems every movie I see has problems which seem to have been based on decisions to cut stuff out or use alternate takes of a scene which doesn't match up with others. It seems to be a blasé attitude which has crept into modern day thinking and which allows for these kind of slap-dash decisions to be made. I’m not impressed.

But anyway... moving swiftly on...

The Doctor comes to stay with The Ponds and though it would be true to say that the episode has a lot of scope for comic moments and genuine feeling, it doesn’t quite take all the opportunities it presents itself with, if truth be told... but I don’t care really because if you get a script which places The Ponds and The Doctor in a social setting, then I’m all for it.

Unfortunately, this one did seem like a combination of two old episodes combined. The “coming to stay” scenes did seem to feel like they’d been stolen from a previous Matt Smith story, The Lodger, from his debut season... while the invasion of the cubes who are accepted into humanity as an anxious UNIT ponder their meaning was very similar to the opening of the two part finale of David Tennant’s second season... Army Of Ghosts. Still, self referential plaguerism aside, the episode kinda worked well, with Rory and Amy in the process of making a decision as to whether to stop their adventuring with The Doctor for good or carry on “in the loop” so to speak. Along the way there were some references to a new adventure with the Zygons (last seen in their debut episode in Tom Bakers Fourth Doctor story Terror Of The Zygons) and a new UNIT character introduced called Kate Stewart, who happens to be the daughter of a long serving and endearing character from Doctor Who history, Brigadier Alistair Lethbridge Stewart... so that was a nice touch.

So yeah, the episode was good, like I said... up to a point.

Alas, that point was roughly the last fifteen minutes when things started going all "extra-terrestrial action stations" and the threat was finally understood, only to be reversed in mere minutes as The Doctor became a really terrible example of a "deus ex machina" and everything was as it was again. Pretty rubbish and definitely felt a little rushed if you ask me. Could have done with being a two parter, perhaps, and adding more dramatic weight and a more harder earned victory, don’t you think?

The whole episode led up to the dramatic point that Rory’s dad has encouraged The Ponds to carry on their adventures, after The Doctor has all but promised that they’ll never die on him. Yeah, right, well we can all see where this one is going can’t we? Maybe they’ll just die of old age but next week is being touted as The Ponds last episode on the series, so we’ll just have to see. Personally, I’m hoping that we don’t lose River Song too in the process, but I’m guessing we will. I think something funny and irreversible may be about to happen on the show concerning the last few years of Doctor Who history... and all I can say is, I hope I’m wrong.

Not a bad episode, though...on the whole. Could have done with a little more emotion and a little less running about but I’m guessing there’s going to be a lot of running about next week so maybe that’ll make up for it. Still looking forward to it... just about.
Posted by NUTS4R2 at 21:27