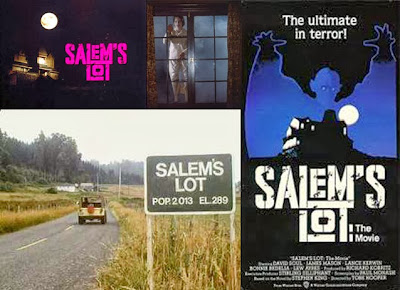 There’s an image which has stuck in my memory over the years but it rarely haunts my dreams the way it did as a child. A big double window made of various panes, looking out into the night through this window and the fog rolls in. Out of the fog, a small boy floats towards the window, his eyes black rimmed and glowing. He starts to tap/scratch on the window... he needs entrance and, of course, everybody knows a vampire has to be invited in.

This scene is something I saw in either 1979 or 1981, if you believe the UK TV release date from the IMDB (which I don’t as it happens, pretty sure it aired both in 1979 and 1981 over here). It’s one of many images which made a distinct impression in my mind when I was just 11 years old (or 13 depending on whether you believe etc), as I watched, over two consecutive nights I think it was, the two episode mini series ‘Salem’s Lot. I already liked (and had bad dreams from) various horror movies as a growing lad (most notably with the series of Quatermass remakes by Hammer) and I was doubly curious because it also had David Soul in it, who had just finished his very successful four year run as one half of what the BBC television announcer would weekly proclaim as, “those rough, tough but likable cops” Starsky and Hutch. Soul played Ken Hutchinson, the weedy one, but it was still kind of interesting to see how he would be acting in something else.

What can I say? Not only is he pretty brilliant in this (and I don’t even want to think about the TV mini-series remake of Casablanca he was in where he played Bogart’s role, thanks very much) but ‘Salem’s Lot is actually a quite brave and interesting piece of US horror television, following in the footsteps, perhaps, of the two extremely successful TV movies The Night Stalker and The Night Strangler and the one season TV show they spawned, Kolchak: The Night Stalker.

It’s been a long while. 34 years (or 32, depending on, yeah you know that bit already) and I have to say, it’s really stood the test of time. I do think that this is the stand-out career highlight for director Tobe Hooper, director of the original version of The Texas Chainsaw Massacre and, allegedly, pseudo-director of... erm... Steven Spielberg’s Poltergeist. There are things that people of a younger generation might find hard going about this one these days... it had a pace all it’s own and most kiddies these days might not be able to sit still for that... but for people of my generation who were terrified and in love with the show, as I was, well it really isn’t all that dated compared to the original broadcast years ago.

The first episode starts off with a scene which takes place two years after the main narrative of the show and we meet David Soul as Ben and Lance Kerwin as Mark, still running from the events you are about to watch. A little bit of business with a vial of Holy Water which glows blue and then we’re into the jigsaw-like typography of the main credits, as composer Harry Sukman’s unbelievable score quotes the Dies Irae for a little bit before propelling us at high speed through a main title piece which is so startling and memorable that I’m surprised it hasn’t been released as a soundtrack before now. It was, in fact, released as a limited edition, 2 disc CD soundtrack a mere two weeks ago and I expect it will sell out soon (mine arrived a couple of days ago and it's been well played already) but the score is astounding in its moody atmosphere and that title music, I suspect, may have even been inspiration for Danny Elfman’s opening titles for Beeteljuice (and may also have been “inspired” itself by Bernard Herrmann’s Skeleton Duel music from The 7th Voyage Of Sinbad). That’s just my own flight of fancy speculation, of course... but I do believe it.

Then we get in to the main story as writer Ben returns to his home town of ‘Salem’s Lot in Maine (where the writer of the original novel, Stephen King, sets most of his books and, indeed, lives), once known as Jerusalem’s Lot but shortened over the centuries. He comes to write the story of a house that terrified him as a child. A house where... bad things happen and, by a strange coincidence, where bad things are happening again. And this is where King pays tribute to (or just plain steals and splices in) the original Bram Stoker version of Dracula. With James Mason’s Mr. Straker acting as a Renfield substitute to “Mr. Barlow”, who is a vampire modelled after the Max Schreck performed creature in F. W. Murnau’s original Nosferatu: A Symphony Of Horror (hmmm... Nosferatu... sure I’ve heard that name before somewhere). The local estate agent has secured Mr. Straker and Mr. Barlow a nice antiques shop and, of course, the house that Ben has returned to write about.

And things get predictable but comfortable from this point, as Ben and his friends try to find out what is going on while the vampire slowly starts pulling the town apart. It’s not, in any way, rushed... but it still feels pacey at some points. I believe it was also very influential (I can think of at least one moment in John Carpenter’s The Fog which was done here first, although it's more likely that the specific scene I'm thinking of was first seen by Carpenter in the movie version of The Trollenberg Terror aka The Crawling Eye) and it firmly supports the foundations of the vampire myth in the 20th century while still having a certain amount of fun with it.

It also has some really nice shock and scare moments which were very well documented and talked through over the course of the next few days after its original airing in various school playgrounds around the country. The moment, for example, when a young boy is driven back from the wind, walks towards camera and then a black silhouette pops up from the bottom of the screen in front of him which is guaranteed to make most viewers who are engrossed in this jump out of their skin. Especially when it’s accompanied by a particularly close relative of the 1950s, B-movie monster, musical stinger, courtesy of Mr. Sukman’s thrill ride of a score. A similarly startling but, at this point expected, sit-up-in-the-coffin-and-take-a-bite moment also sticks in the memory. It’s all really great stuff and filled with carefully timed moments such as this, coupled with great acting from the entire cast, but especially all those I’ve mentioned so far and with a big shout out to young Bonnie Bedelia (known more for her role as Bruce Willis’ wife in the first two Die Hard movies) and the always watchable legend who is, one of the greatest overlooked actors in the history of the cinema... Elisha Cook Jr.

There is one irritating thing, though. It’s a glaring continuity error with a set of packing instructions which are stuck to the front of the crate which holds the coffin and body of Mr. Barlow. They seem to appear and reappear at will. You can forget about matching shots in this sequence of the show... but it is fun to play “spot the packing instructions” I have to admit.

Now, something which I would like help with from the memory of the NUTS4R2 reader collective is this. The character Mark has a penchant for horror pop culture. Various model kits and posters/stills of the iconic Universal monsters fill his disproportionately large bedroom (how do characters get that kind of money in the jobs they are in). In the story he is seen fixing part of the old Auroura model kit of the Frankenstein monster. Now I remember a scene where, once it was fixed, he pressed a button on the model several times and its eyes lit up and it made a buzzing sound. It doesn’t, however, seem to appear on this version of the show. Did I remember this right or have I remembered a scene from another movie or TV show from around the same time and grafted it onto my memory of ‘Salem’s Lot as the decades take their toll on my tired brain. I’d be really grateful if somebody could leave a comment or get in touch through twitter and put my mind at rest on that one.

And so that’s about it for this write up. I loved this as a kid and I still do now. This and Christine were the first two Stephen King books I read in my early teens (I read Christine first). I remember when I read ‘Salem’s Lot that the book followed it a good deal but then branched away and did its own thing... that is to say, the TV show changed it around and the writer, director and producers made some decisions about how best things would play out on popular TV is my guess. But it’s a pretty entertaining horror show and very much talked about by people, especially children, at the time. Definitely one to grab hold of and have a look if you’ve not seen it before and are in love with the horror genre. I understand there has been both a sequel and a remake to this in the ensuing years, but I haven’t seen either of those yet. I plan on fixing that sometime soon but, in the meantime, I will say that I can’t imagine any remake or alternate adaptation of this which could be anywhere near as engaging and entertaining as the original... nor have such a kick-ass score as this one. Definitely watch this 1979 version if you’ve got the time.