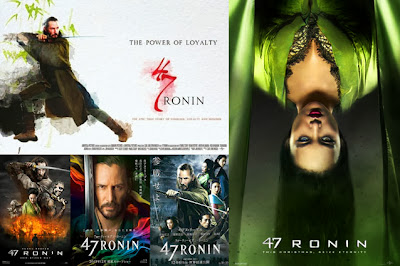 47 Ronin
2013 USA
Directed by Carl Rinsch
Playing now at cinemas in the UK.

Warning: There are spoilers here but it’s such a classic tale that’s
been corrupted, you probably already know how it ends anyway.

Michael Lonsdale:
“The 47 ronin, do you know it? 47 samurai whose master was betrayed and killed by another lord. They became ronin, masterless samurai, disgraced by another man's treachery. For three years they plotted, pretending to be thieves, mercenaries, even madmen...”

Robert DeNiro:
“That l didn't have time to do.”

Michael Lonsdale:
“... And then one night they struck, slipping into the castle of their lord's betrayer, killing him.”

Robert DeNiro:
“Nice. l like that. My kind of job.”

Michael Lonsdale:
“There's something more. All of them committed seppuku, ritual suicide, in the courtyard of the castle.”
Ronin, written by J.D. Zeik and David Mamet (uncredited and writing as Richard Weisz)

There’s even a word for it in the Japanese language... Chūshingura. Chūshingura is a tale based on the real historical incident of 47 Ronin who plotted revenge for the death of their master and... well, you can read the summarised tale as it is told in John Frankenheimer’s excellent action thriller Ronin above.

There have been numerous versions of this story in literature, film, TV, opera and ballet etc throughout the history of Japanese culture... I wouldn’t be surprised if the final tally, should anyone be brave enough to try to research it, is in triple figures. It’s a simple but epic tale of the force of will of a united group of people teamed together and my only regret, though I really was trying to claw back some time, is that I didn’t get to watch the Takashi Shimura version I bought to watch before Christmas so I could at least compare that version to this new one. Alas, time ran out on me so it’s on a bit of a back burner now... but hopefully that will make it into this year’s reviews at some point.

Anyway, what we have here in this new “American” interpretation of Chūshingura, 47 Ronin, is what happens when an American company tries to do an adaptation. Instead of just the simple tale of 47 men banded together to exact revenge and then commit ritual suicide... we have some kind of bizarre corruption of the story involving magical creatures and demons and shapeshifters and the like.

Not very clever, Hollywood, are you? When it comes to treating a treasured story of Japanese history and then raping it for something that will make it more “box office”. The very idea of this complete lack of respect for the original material does leave a bad taste in my mouth, to be honest, and I really can’t review this movie in terms of where it fits in within previous Chūshingura because, well, because it’s like some kind of ill-judged Frankenstein’s monster when it comes to actually turning in an honest adaptation.

What I can do, however, is tell you just how the film is as a stand alone, typically Hollywood entertainment spectacle, divorced from the pretence of adaptation and, surprisingly... it doesn’t fare any better.

And I really regret having to write that.

A lot of the way this movie falls down is in the editing to be honest. It’s really aggressive and I’m not just talking about the action sequences here which, to be fair, are at least comprehensible in terms of decoding the fight scenes into something that all makes sense... unlike some modern movies these days. No, I’m actually talking about the whole movie being aggressively cut together to the point where it’s quite distracting, even from the very beginning. It can’t keep still. I didn’t notice any shots lasting for longer than seven seconds when I was counting them at various intervals in the movie and, to be honest, the fact that I even was counting them shows you how distracted I was by this MTV style of shot pacing. Dreadful stuff. The movie might... might... have had some good cinematography and some well designed shots in there somewhere... but I’ve got no idea whether it did or it didn’t because of the fact that my eye was being thrown about all over the place to match the pace of the editing.

Now other stuff in the movie was mostly fine. The performances were all pretty convincing... nothing which felt all that great but it was more than serviceable... and the score was okay... what I could hear of it in the mix. Again, a nice support... I’m not sure how it would work as a stand alone listen though.

But when we come to the poor decision of the mythical, hocus pocus elements coming into play....

Well it was a big mistake. It could have worked as an organic whole... but the whole of this element, plus the Keanu Reeves character even (and I’m not knocking Reeves, he’s a solid actor) all seems somehow... well... uncomfortably plugged in at certain points throughout the course of the movie. I reckon this film could easily be recut from the same footage to exclude both the Reeves character and the magical elements and still make perfect sense as a narrative which would, I’m sure, leave the basic story as what it should be. However, it looks like its been added in as an afterthought a little way into production by a bunch of Hollywood number crunchers and, horrible as that sounds, I wouldn’t be at all surprised if it someday transpired that this was, indeed, the case.

The ending of the movie seems, at first glance, to be a little braver than you would expect from a big budget American made film but, all the way through while I was sitting watching this sequence and the little “afterword” at the end of the movie, it just felt like this was the producers trying to “get the first defensive punch in” and kinda apologise/justify what they have done here. It just didn’t feel genuine. In fact, to paraphrase a character Mr. Reeves plays in another movie... it felt downright bogus and that’s a shame.

It was also rather bloodless when it came to the violence and that’s a classic case of a studio trying to slip past the censors and, unfortunately, it still seems to be a tactic that works. You can violently chop as many heads off as you like, and they do in this one, as long as you don’t see any blood anywhere. It’s really bad that they are allowed to get away with this because one of the things it teaches the kids who are able to see these movies because of the lower rating, is that violence has no consequence. Personally I think it would be better to let them in and scare them with the consequences of violence than glorify it at this level... but that’s another argument for another time and I believe I’ve probably made my point on this in past reviews.

I went to this movie expecting full well to denounce it as a bad adaptation but, it has to be said, I was hoping to be able to recommend it as a movie in its own right, when you strip it away from the actual piece of history it purports to represent. However, I can’t even do that. 47 Ronin, at least this version of it, is one of the least entertaining movies to have giant dragons and demons in it that I’ve seen for some time. If you do want to see this, see it cheap. The 3D is pretty poor anyway.