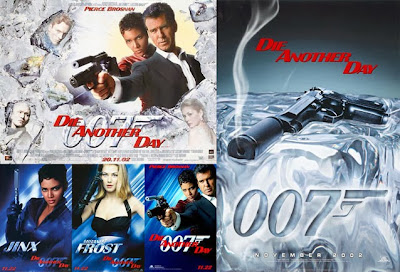 I looked at this again the other week and thought to myself, once more, that it was such a shame that the remarkable Bond actor Pierce Brosnan had to exit the series with such a terrible movie. I am looking back on it now and I’m still stunned as to why half of the decisions on this film were made.

Okay, so lets get started on this mess.

Unlike the previous three Brosnan films, all of which had very strong pre-credits sequences, Die Another Day starts off with what seems to me like an overly dull, couldn’t-care-less series of action sequences, ultimately involving hovercrafts in a jungle setting. It still doesn’t hold my interest and as Bond is caught by his enemies at the end of this sequence (which is a first for the series I think), we go into a truly nasty opening credits sequence which actually functions as part of the narrative (again a first) and tells the story of Bond being tortured for over a year. It’s kinda ugly and, well, kinda unremarkable really. And just to add insult to injury, there’s an opening song by Madonna with truly unhelpful sound dropouts (done deliberately) which is okay, perhaps, as a song in its own right, but truly not really a Bond song. I don’t know what they were thinking when they accepted this as their song on the film but I don’t think the good of the movie came into it. Probably more about dollars and pounds.

This was the 40th anniversary film for the series and there are a lot of references to Bond’s past movie exploits in it, but it all seems to have been put together in a really clumsy manner and it seems more about getting everything in than truly paying homage to the film’s distinguished ancestry. They even throw in the ornithology book that Ian Fleming looked at to get the name of his super spy but, they’re not exactly subtle in doing it.

Everything about this film seems unbelievably over the top and, even the one saving grace of a fine set of actors doing their best with the material they have, does not go nearly far enough towards saving this picture. Even Brosnan himself, still completely in character, has to deliver lines of dialogue which are really just a big long series of polished one-liners. The dialogue and sexual innuendo had been creeping up quite a lot in the last couple of films but they still kept it to manageable and somewhat Bondian levels. Here they over indulge themselves and the consequence is that you can’t take anything anyone says with any degree of seriousness. It’s all just a knowing quip as far as the script goes.

The thing which really helps ruin this film, though, is the over the top science fiction aspect to it. There’s often been an element of sci-fi in Bond but in this one he has an invisible car. I’ll say that again so you can let that meander around in your brain for a while and figure out a reaction...

Bond has an invisible car!

Yeah, I know, I know. It’s all based on stealth technology, I’m sure, but I really don’t think this has a place here and the special effects are such that you really can’t see the thing. Seriously, whether this stuff was in the realms of possibility or not at the time, the inclusion of this kind element just knocks the film’s credibility for six and really doesn’t do it any favours. He’s not Wonder Woman with her invisible jet... he’s James Bond.  And, by the way, an invisible jet is easy to get away with when you’re a character existing in a world which allows for both men and Gods. Here it’s all scientified and, basically, just mocks itself.

And, of course, in addition to this... Bond can stop his heart at will.

No seriously. Want me to repeat that one too?

Bond can stop his own heart just by thinking about it.

He uses this technique to create a distraction when he’s trying to escape his own people. But it’s preposterous... and it’s not how it should be. He’s not Derek Flint. Derek Flint was a spoof character and, as such, can live in a world where he is so far advanced he can stop his own heart. James Bond is not that character and it’s yet another blow to the believability of this movie. I really don’t know why the writers and producers thought they could get away with this stuff. I remember coming home from the cinema at the time and thinking, “Wow. I’d almost rather be watching Octopussy than that.” Seriously, it is that bad.

Which is a shame really because there’s a lot of talent both on and off the screen in this one but... they just can’t conquer a preposterous script, I’m afraid. And I really could have done without the terrible joke scene near the end were it appears Bond and Miss Moneypenny are finally “getting it on”. Awful, embarrassing stuff.

Of course, one of the main talents in the crew is composer David Arnold, who really knocked it out of the park with some of the best music in the Bond series in the last two films. Here, he really does try but the music seems a little less stimulating than before and even though he throws the Bond Is Back musical phrase in there and also the famous bass line from On Her Majesty’s Secret Service, the music is mostly a dull affair and this is reflected in the compact disc stand alone listen too, as far as I’m concerned.

And that’s about it, I’m afraid. I really haven’t got a whole lot left to say about this one. Die Another Day is a terrible Bond movie and both Brosnan and his audience deserved much better than this shabby treatment. One to avoid if you want to remember Brosnan as one of the better Bond actors.

Dr. No
From Russia With Love
Goldfinger
Thunderball
You Only Live Twice
On Her Majesty’s Secret Service
Diamonds Are Forever
Live And Let Die
The Man With The Golden Gun
The Spy Who Loved Me
Moonraker
For Your Eyes Only
Octopussy
A View To A Kill
The LIving Daylights
Licence To Kill
GoldenEye
Tomorrow Never Dies
The World Is Not Enough
Die Another Day
Casino Royale
Quantum Of Solace
Skyfall
S.P.E.C.T.R.E
Posted by NUTS4R2 at 19:34