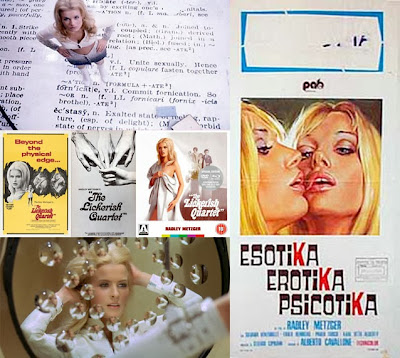 Radley Of The Lost Arc

Okay. So why I found myself finally getting into The Lickerish Quartet is because I was in Fopp records and they were selling Arrow Video’s BluRay/DVD Dual Edition for £6 and, since I’d never actually gotten around to seeing a Radley Metzger branded sexploitation movie before, I figured I might as well start with this one. I’m very glad I did because now I’m hooked. Anyone expecting a mere piece of exploitation cinema from this one should think again... this movie is the Last Year In Marienbad of sexploitation movies and I can’t believe the critics weren’t a lot kinder to it when it first came out.

The film starts off with a quote from Luigi Pirandello’s Six Characters In Search Of An Author and I groaned a bit at that, not because it’s the only work by Pirandello that I’ve read, but because I’ve seen Pirandello referenced on this work in movies and books so many times and the connection is usually... well, pretentious and tenuous at best. What I didn’t realise, until I was about a quarter of an hour into the movie, is how appropriate in a way this play is to the work that Metzger has plotted out here.

The film starts off with a well worn black and white pornographic movie being projected in a living room while an aristocratic husband and wife (there are no character names and really only about four characters in the entire film, give or take a couple of scenes and some variations) make comments and wonder about the kinds of people who star in these things, while the son looks on with contempt. The husband and wife are played by the always watchable Frank Wolff and Erika Remberg. The wife’s son is played by Paolo Turco. Wolff would tragically commit suicide about a year after this film was released but he’s always an actor I’ve liked. The opening sequence is quite long and there’s a fair bit of interesting dialogue... and that’s because the director needs certain key things to stick in your mind.

All through the film we are treated to really quite stylish edits, juxtaposed against long tracking shots and zooms. Visual metaphors such as one of those tall, thin, drinking ducks is used as a cross cut for sexual intercourse, resting in it’s drink and motionless at one point as a metaphor for post-orgasm afterglow. There are also various little flash forwards and backwards, which reminded me of the cinema of Nicholas Roeg, but which have no audio fanfare as a distraction and this allows the quick cuts to creep up on you totally unawares and happen sometimes before you even had time to consciously register them before you’re thrust back into the scene you were in.

At first it just seems like a confident director and editor playing with their film but, as the story develops, you realise that the people involved in this movie are actually using the film to shape the story themselves... although the story itself disappears due to... wait I’m getting a little ahead of myself.

When the husband, wife and son go to see a Wall Of Death act in a carnival, the main girl on the motorcycle is the dead spit of the main girl in the pornographic film they’ve been watching in the opening sequence... so for a laugh they invite her back (she is played by the very “easy on the eye” actress Silvana Venturelli) to see her reaction when they show her the film...

But wait. Something is wrong. When they play the film back for her, the lead character’s face is no longer visible and... that’s when things start getting interesting and more like Pirandello in the execution of the film. The edges between the reality of our four protagonists and the film they were watching becomes blurred. Plus, what’s all the footage of a GI in the war liberating a prostitute and her son about? Well it all makes a little more sense as the film continues on its way.

As the weekend in the mansion home of our original three protagonists wears on, their guest seduces all three of them in turn and has sex with them at various locations. Frank Wolff’s library room is a perfect example of the sheer visual and creative flair of the director, as the floor is decorated with blown up dictionary definitions and the guest and the husband throw out the books as they ponder the true value of words and knowledge They then strip off and make love on the floor which, as they have sex, you realise is all definitions of sexual words... it’s all pretty amazing, actually.

But this is minor compared to the structure of the movie, which slowly becomes more elastic and unravels before your very eyes...

The film is beautifully shot, has some interesting acting styles, is wonderfully edited, is colourful and vibrant to the eye and it’s all matched by a gorgeous score by Italian composer Stelvio Cipriani. I think the wordless vocals which pepper the soundtrack like little breaths of gold syrup are probably supplied by the famed Edda Dell’Orso... but that’s just a guess since the IMDB has absolutely no idea (she did a lot of this stuff uncredited, which is about what you’d expect from a solo artist within an orchestra or choir, to be fair).

And that’s all I really want to say about this film, I think. It is a sexploitation movie, it’s true, but with Metzger the barriers between exploitation and high art are blurred and broken down in much the same way as the four characters in this movie are slowly transformed into something both much more and much less than themselves. There’s a fair bit of nudity, to be fair, but I’m certainly not complaining about that and it really shouldn’t put you off watching this one. I was truly dazzled by this movie and I think it’s fair to say that it’s not what I was expecting. I really do have to track down some more of this writer/director’s movies now, if I can get them uncut, because I think this director deserves some of my time. A definite recommendation from me, especially if you like films which dazzle in terms of the way a shot is designed and edited. Truly great stuff.