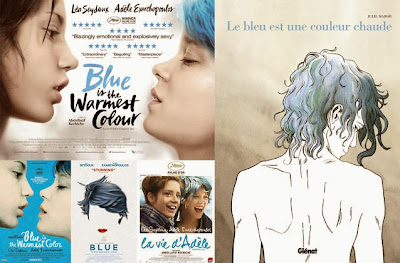 Torrents Of A Labia

La Vie d'Adèle – Chapitres 1 & 2 is known over here as Blue Is The Warmest Colour, the title of the original graphic novel, Le Bleu Est Une Couleur Chaude, on which it was based... although I understand the writer of that, Julie Maroh, is not too happy with the way the movie version turned out. This is possibly understandable since the summary I just read of the story deals with a long relationship which ends with drug addiction and death. So if anyone is expecting the movie to be like the comic, you may be a bit disappointed with it.

Now I didn’t know much about this movie going in, other than it was three hours long, had a long lesbian scene in it which was quite gruelling to shoot and that the film, as a whole, wasn’t very pleasant to the two lead actresses, Léa Seydoux who plays the blue haired Emma and Adèle Exarchopoulos, who plays Adèle. Although it’s essentially a two hander with two very watchable performances by these actresses, Adèle is the real main protagonist and it’s through her eyes that we see the story of the film’s central relationship and it’s her story we are following.

Now, I have to say, I was expecting much more on the visual level, seeing as the posters released have all been quite neatly designed, but the film is more naturalistic than I was hoping for in terms of no blatantly artificial or stylised framing that I could make out and a heck of a lot of handheld camera work too. It’s not in any way incompetent on a visual level, far from it... but for me I was expecting something within the realms of Kieslowski or Tarkovsky and, instead, got something which was perhaps a little more reminiscent of early 70s Hollywood film-making than what I’d expect from a European director.

Of course, the haphazard editing and absolutely minimal use of music (a couple of very brief non-diegetic cues and source music when needed) means that there’s no possibility of the visual design intruding or acting as a filter to engagement either and I did find that, although the movie is pretty much a full three hours (oh, yeah, alright then, 179 minutes... but it’s pretty close), I didn’t find myself once getting bored and it was over almost before I knew it. I’d still prefer a stronger visual design myself, though, and the muted colours weren’t working for me so much.

The director was interesting with what he was  doing with transitions both visually and in terms of sound design, though. Quite often we’d cut from a shot with one or two characters in isolation to one or two characters in the context of a crowd. We then start re-approaching that character and singling them out of their surroundings and contextualising them from the hubub of what’s going on around them... be that a protest march, a nursery school classroom or a dance performance. It also allows the director to do with sound the same kind of thing that Kurosawa did in the battle scene in Ran and the snow lady scene in The Blizzard section of Dreams... and that is he uses a roar of sound, be it a crowd of people or dance music, to shock you into that transition, which usually goes from a moment of self reflection or post-coital reverie into “loud and chaotic” without notice. This caught me out a couple of times because I was very tired when I saw this movie.

The sound design in general is all kinds of fun on this one, I have to say... especially in the sex scenes. A lot of the time the volume and presence of the sounds created are, in the parlance of our time, turned up to 11 and it certainly gives the film a very stylistic feel to it in the accoustics department, at least, which goes some way to making up for the lack of strong visuals I reckon. But maybe that’s just me.

The real find of this movie, though, is the two actresses, who both have strong and likeable personalities. They carry the movie from the realm of being just so-so into something really worth taking a look at. Emma, the art student with the blue hair is almost channelling a young Oscar Levant in looks, in female form, and she comes across as a very strong presence in contrast to the wonderful character/actress Adèle... who is the wandering innocent of the film to some extent, although by the time the movie reaches its climax, you’ll soon come to realise that, despite crying her way through a third of the movie, she’s actually the stronger and more interesting character of the two. The girls work very well together (yes, even in those scenes) and, given all the post-Cannes shenanigans, which mark the first time the actresses in a film have been specifically named on the award along with the director... I would have to say that we very much have the director to thank for coaxing those performances out of them, I guess. Although where performance and direction blend is not something I’m that clued up about, I’m afraid.

Blue Is The Warmest Colour, then, is not the great visual confection that I was expecting when I sought this one out... but it is a really good movie, full of emotion and a certain quality of weight to the characters which makes for a really impressive and fulfilling viewing experience... which in my book makes for great entertainment. The film has only been out two weeks but already looks like it’s on its last performances over here. So if you want to catch it on the big screen... now would be the time to go.
Posted by NUTS4R2 at 21:01