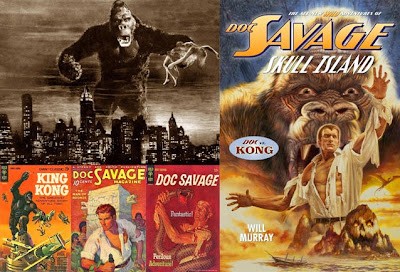 2013 marks the 80th anniversary of two iconic fictional characters... Doc Savage and King Kong. To mark the occasion the current Kenneth Robeson, Will Murray, has written Doc Savage: Skull Island, which gives us a full-on collision between these two fantastical titans. However, this is a little bit different from any Doc Savage novel you’ve ever read and the first signs of this are right there on the front cover before you even open the book because, for the first time, Will Murray is credited as the writer of this novel, rather than masquerading under the old Street And Smith pen name Kenneth Robeson (under which both the Doc Savage and The Avenger stories were originally published).

Now this is a very interesting phenomena in itself because, the only time I can remember a Doc Savage novel being published under any name other than that of Robeson is when famous science fiction writer Philip José Farmer wrote Doc Savage: Escape From Loki back in 1991, which I think is one of the very early volumes in the series of post-Lester Dent additional novels which started off Will Murray on his Doc Savage trajectory.

Now then, the basic story of Escape From Loki was the back story, mentioned in the novels numerous times but never told in detail, of Doc’s exploits in the First World War and how he came to meet his five aids who would go on to assist him in his career of writing wrongs in the 1930s and onwards. It was, therefore, a slightly different version of Doc Savage in that novel and, perhaps it’s because Will Murray has also chosen to cover Doc’s pre-1933 life in this one too, that the cover of this volume features his name only.

And indeed, it’s a very different Clark Savage Jr who we find running around in these pages. The novel is bookended by Doc telling three of his five aids the story of the time when he met the giant ape King Kong.

Now it’s never been absolutely, specifically spelled out in the original novels but, it doesn’t take much research to figure out that the only building in New York that could have housed Doc Savage’s 86th floor headquarters at the time the tales were first written is the Empire State Building. The mooring mast atop the building also fairly clinches that, from what I can recall from other people’s research over the years. And so this tale starts off in 1933, a few hours after Kong has been killed by the aircraft that took him down in the movie. Doc arrives on the scene at the bottom of his building and immediately takes charge on how to remove the body and get it out of New York... he also feels obligated to do so since the giant ape had saved his life once, and vice versa. This leads us into the story set not very long after the end of the First World War and we see Clark Savage teaming up with his dad (who dies just before the start of the very first Doc adventure, The Man Of Bronze, and springboards that first ever published mystery) on a mission to find his long lost grandfather, Stormalong Savage. And off we go...

And, like I said, it’s a very different Doc and I guess Murray must have been somewhat nervous as to how this book was going to be received by the many Doc Savage fans around the world but, frankly, if you’re going to set the novel in this time period then... yes... Doc really is going to be a different character. And that’s really okay.

What Murray does here is a real labour of love and I have to say that you will probably only appreciate this particular novel if you are quite familiar with the Doc Savage character in general. This isn’t one you would want to just jump into as a first read... you will get totally the wrong impression of Doc. And Murray is a lot more subtle and simultaneously bold in his approach to the growing character.

The thing is, Doc Savage never kills. We all know that. He never takes a human life and will save from death even the lousiest villain to be re-educated at his crime college rather than let them perish. The fact that they do often perish is usually due to one of his assistants, Monk, getting a little too overenthusiastic or, more commonly, an accidental death due to being in a less than controlled environment (things erupting, falling or exploding etc). Here though, in (and on) Skull Island, Doc is a death dealing machine who will lop off limbs and hack off heads in an efficiently coordinated attack on his enemies... without hesitation. He will even, once rendering them unconscious, finish them off so they don’t cause more trouble later on. Now this might seem a pretty big leap for some fans of the character but it’s really not... Murray uses this opportunity to observe the man that became Doc Savage and shows you him at a time when he is still working things out.

For instance, the rapid super-firer pistols which fire mercy bullets, a soft bullet which breaks on contact with the skin and renders a man unconscious for several hours, is something which he invents for his aides to use throughout the near 200 novels. He is dedicated to never taking a life but, here, we can see the origins of his thought processes on this matter as we see him start developing an annihilator, super-firing machine gun in his spare time on the long journey which eventually brings him to Skull Island. Its a weapon of war but, the principal of the mechanical workings at least are there. This is reenforced later in the yarn when he develops a multi-barreled blow pipe contraction (which presumably looks very much like a set of pan pipes) to fire poison darts. These two contraptions are obviously the origin of his super-firer, anaesthetic pistols.

Another example would be the fact that his father, Clark Savage Sr, is surrounded by Mayan man-servants and can talk this ancient language. Any fan of the books and even the 1975 movie will know exactly what that is all about... and it’s little echoes like these, never spelled out but left for the old timer Doc Savage fans to figure out, that make this book great.

This is, of course, coupled with lots of little celluloid landmarks for the topography of Skull Island as we recognise it from the 1933 King Kong movie and the way Murray rubs the characters and situations together is an absolute joy to read. You get a real sense of how the character we are so familiar with was formed before that very first Doc Savage story, The Man Of Bronze.

My only real criticisms of this one, and they’re only criticisms if pushed, are that the book maybe rushes the epilogue, where we return back to the 1933 time frame and also the fact that, while on Skull Island, we never got to see the creatures in the pit which were so terrifying to the original preview audiences of King Kong that the footage was immediately excised and has never been found to this day. I would have liked to have seen some reference made to this lost sequence... with Doc fighting a giant spider or something (although I believe the actual spider’s web makes it into this novel as an aside at one point, if I read it right).

I can see how this story will ruffle some Doc fans’ feathers a little but, I really think the things Murray has done here are absolutely wonderful and they do help give a little depth to a character who is, to be fair, an emotional cypher throughout pretty much all of the Robeson tagged novels. We see the man of bronze before the bronze has quite finished coating the personality and little chinks in his amber armour like Doc and his father's tendency to quote and be inspired by cheap, popular genre fiction (Nick Carter, Sherlock Holmes, Tarzan etc... all of whom are specifically named in the text) give a possible insight into the forging of the heart of this mighty, bronze behemoth. If you are a longtime fan of Doc then I can only strongly recommend you to give this book a go. It’s not quite the Doc you know but it’s certainly the Doc who will become that character you know and it’s a really well written novel... still written within the style parameter’s of Lester Dent, who was the original Kenneth Robeson, and certainly a page turner you’ll not want to put down for long.