Doctor Who: The Time Of The Doctor 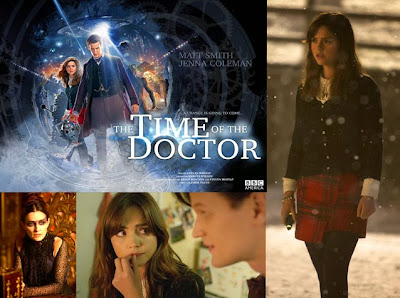 Capaldi Other One,
It’s Got Jingle Bells On...

Well that was a bit better.

In fact, it was a lot better. This time around Steven Moffat went back to getting almost everything right about giving us an entertaining Christmas special where everything actually made a bit of sense.  “Almost everything right” did I say? Well, yeah, come on... if you’ve been reading my reviews of the show ever since I started this blog you’ll know I usually have at least a couple of gripes with an episode (at best) and, at worst, a whole load of them.

Fortunately for me, this is definitely an “at best” situation, which means, well you know, like I said... I have a couple of gripes. I’ll save those for a little way down the page though as I’m going to focus on some of the positive stuff here first and, as a “for instance”...

The tone was perfect and just the right mixture of joy tinged with deep and bitter sadness which is the thing you always need to travel through and get a really good Christmas special... Doctor Who or otherwise. The performances of Matt Smith and Jenna-Louise Coleman were, as was expected, absolutely brilliant and, as another expected bonus, but a bonus nonetheless... so were the performances of everybody else. Especially that of Orla Brady as Tasha Lem, who is a character who you cotton onto as being kind of interesting and just what the show needed right from the start. Unfortunately she’s dead and dalek channeling before the end of the episode but, hey ho, you can’t have everything.

The story was great and, in addition to having just the right blend of fairytale and tragedy that was required, it actually tied up (hopefully for good) a whole lot of loose ends which had been occurring since Matt Smith first made an appearance. Some things I knew were going to be back... Amy’s crack in the wall, if you didn’t see that one coming then... seriously? And some things I didn’t... but that’s only because the various people in question had been lying to us all on behalf of the BBC and saying they would never ever return to the show... yeah, I’m looking at you Amy Pond/Karen Gillan. Nice to see you but, if I’d have been less trusting, I would have put money on an appearance from you in the last of the Matt Smith episodes.

More importantly though... the Moffster put right something that the fans had been waiting to be addressed for quite a while now... and I’m going to ignore continuity with The Brain Of Morbius for now because, seriously, cut the guy some slack. Hopefully he’ll get to it.

But anyway, what I mean is, he’s addressed the issue of The Doctor only having 12 regenerations. He explains how he’s actually the 13th version of The Doctor (12 regenerations means 13 bodies... makes sense, right?) and the Time Lords (presumably benevolent to him after hiding their planet away in the last episode) have given him a reset with a whole new set of twelve regenerations to get through. So that’s good... let the writers in 50 or so years have another crack at solving that problem again with their own deus ex machina to thrown into that mess.

For now though... he’s throughly reset.

The special effects were okay again on this one... or at least they certainly weren’t terrible and Murray Gold’s score, whilst seeming to have a lot of tracked cues again (been a while since we heard the tenth Doctor action theme All The Strange, Strange Creatures isn’t it... and completely out of context, all leitmotif aside), was serviceable and, mostly, appropriate to what was going on... if not all that memorable compared to some of the episodes he’s scored.

And so I come to my gripes... you knew they were coming so fair warning to you. Don’t read on if they’re going ot upset you.

Number one gripe is I found the last ten minutes or so a bit, well as I said above, deus ex machiney wheeney... but, a far greater crime than that, I thought that last fifth was... well... kinda dull. But that’s okay... I loved the rest of the episode and often, as in some really good sex, getting there was as rewarding as the actual orgasm itself (although those are always fun too, obviously) and so it’s just a minor gripe, honest guv. I can live with that.

Gripe number two is a minor disappointment too and it concerns the new incarnation of The Doctor, Peter Capaldi, who I have to confess is not and actor I am all that familiar with... since I’ve only seen him in Doctor Who and Torchwood before now. So was it a good performance or was it a bad first impression? Well I’m afraid I’ve got only one answer to that... I have no idea, the sound mix was so bad I couldn’t understand a word he was saying!

Seriously, I couldn’t hear him through all the hullabaloo on the sound mix and that was quite sad. Now it may have been a ploy by the production team because they don’t want to give you too much of a decent impression of him yet before they’re all properly ready... or it might just have been either bad mixing or something which went wrong with the broadcast... who can say? All I know is that I have no idea what Capaldi’s Doctor is like as yet... but at least that gives me something to look forward to in the new year, at least as far as this show is concerned.

So there you have it. A cracking Christmas episode, a bit overdone at the end like a turkey that’s been too long in the oven, and not quite up to the brilliance of the last two Christmas specials... but good enough. Like I said at the start of this review... Moffett got almost everything right, so that was all well and good then.
Posted by NUTS4R2 at 13:58