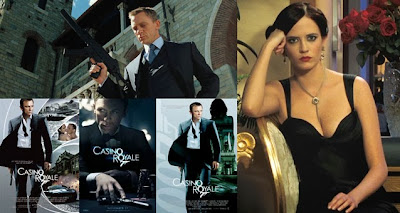 Well I always feel a little bit conflicted whenever I watch this film.

It is, of course, the third time that Ian Fleming’s Casino Royale has been adapted - once on TV in 1954 and then again for a big screen spoof version in 1967. This 2006 version, the first to be produced by EON, is the one that troubles me the most because, while it’s certainly a very good film, for me it just doesn’t quite live up to being “a James Bond film” and, given that it’s got a truly delightful script, I find myself even more disappointed by it.

So let’s put the positives up there first... all the actors are great in it, even Daniel Craig (yeah, I’ll get to him in a minute) and the dialogue is pretty good. As are the sets, costumes, lighting, editing... frankly, this movie works really well in a lot of ways. But there are also a lot of things which drag it down to an un-Bondian level too.

Okay, so my biggest disappointment is Daniel Craig and that’s a really unfair thing to say, to be honest, because he’s a fantastic actor and he does really well with the script he’s given. In fact, he couldn’t have done any better... it’s a brilliant performance. However, some roles require the actors to look the part too and Craig doesn’t look like James Bond in any way shape of form. His hair colour is way too light for Bond, for starters. Why the heck didn’t the producers just insist he dye it for the role? I know it’s just a colour but, you know, every little helps. Secondly, I know he pumped up for the part but, honestly, this guy looks like he’s built like a rugby player... and that just seems wrong. I mean, yeah, he absolutely looks like he could handle the situations thrown at him... just not as Bond. He looks too much like a thug and, yes, while I can freely admit, and have argued the point in the past, that Bond is really just a government employed thug... he’s never really looked like one. To be fair to the writers, this is kinda addressed in the script when Judy Dench calls him a blunt instrument and that’s exactly what Bond is... but visually maybe he shouldn’t be.

Now I’m really not having a go at Craig. I even think he may be able to play, not just a brilliant action hero as he does here... but also a good James Bond. But the approach is wrong in this, I think. Not necessarily his fault. For all I know it’s the producers’ doing. And, yeah, I know I’m very much in a minority on this one. I think Craig is absolutely great in this movie... but he’s not inhabiting Bond, just playing a part. And to me that makes Craig as much of an inappropriate choice for the role of Ian Fleming’s well loved character as, oh, I don’t know, right off the top of my head...? Roger Moore. Well, okay, maybe not quite as silly a choice as Roger Moore but, certainly, in the same ball park. He’s definitely my second least favourite of the EON actors in the role... and I really like this guy. So that’s really annoying.

The other big problem I’ve got is that it’s purporting to be an adaptation of the original novel but it misses on so many levels. Now it gets a couple of things right, to be sure. The torture scene, albeit minus the tennis racket, is the most accurate version (although the fifties TV version of a different torture scene seemed somehow more horrific) and there is at least some kind of card game in it. And Bond falls in love. So there you go... that’s three things they got right.

However, they added loads of action scenes, which I don’t blame them for, and it isn’t the first time, but it makes for an adaptation which hits the wrong tone for the book (actually, it’s a weak novel compared to the next couple of novels in the series but, even so, if you state your intention to put Casino Royale up on the screen, then you should maybe make it as sedate as the novel, surely?).

A really big knock, for me, is that they replace Bond’s regular card game, Baccarat Chemin De Fer, with bloody Texas Hold ‘Em Poker. Honestly? How insulting to the character and spirit of Bond can you get? Really stupid. They even run action scenes between the card games. Casino Royale was all about the card game. That was the whole intrigue of the thing.

So for all this, although a blonde American Bond played by Barry Nelson opposite a British “Clarence” Leiter (not Felix Leiter as in the book and in this adaptation here) is way off base, the 1954 version scores big time over this one as being, so far, the straightest adaptation of Casino Royale around. It’s a target this production couldn’t beat and, frankly, it didn’t even look like they were trying to.

One almost Bondian thing, and equally irritating in its “close but no cigar” prowess, is the wonderful composer David Arnold’s score for the movie. The title song really isn’t good but at least it’s on the right track and it has a strong melody line to pilfer, which Arnold enthusiastically utilises in the score. It’s really got some big Barry Bond statements in there but, unbelievably, it’s sadly lacking the full statement of Monty Norman’s original Bond theme until right as the end credits are rolling. Now I know this movie was being seen as a reboot and the theory was that the character earns the theme throughout the movie (there are a couple of small instances where the baseline, at least, is referred to for a short time) but what this actually means is that you have a non-Bond score on something that is already failing to convince me it’s a James Bond film... so this really doesn’t help matters. The gun barrel prelude doesn’t, for the first time since the series started, make it’s traditional appearance before the opening sequence, and this is just another nail in the coffin as far as I’m concerned (one which has been repeated in the series recently and with similar failure).

So there you have it. Great sequences of suspense, intrigue and action. Great actors and actresses (Eve Green’s turn as Vesper is astonishingly good) too. But, for all this, a truly un-Bondian non-event. I wasn’t too impressed by this effort, to be sure but... worse was to come...

Dr. No
From Russia With Love
Goldfinger
Thunderball
You Only Live Twice
On Her Majesty’s Secret Service
Diamonds Are Forever
Live And Let Die
The Man With The Golden Gun
The Spy Who Loved Me
Moonraker
For Your Eyes Only
Octopussy
A View To A Kill
The LIving Daylights
Licence To Kill
GoldenEye
Tomorrow Never Dies
The World Is Not Enough
Die Another Day
Casino Royale
Quantum Of Solace
Skyfall
S.P.E.C.T.R.E
Posted by NUTS4R2 at 20:21