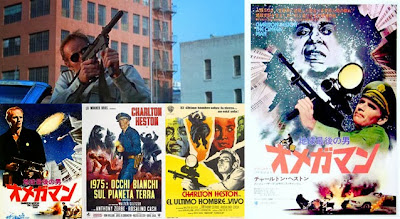 As far as I can make out there have been, to date, four movie versions of Richard Matheson’s classic sci-fi/horror novel I Am Legend. The Last Man on Earth from 1964 (starring Vincent Price and reviewed here), The Omega Man (the subject of this review), I Am Legend (starring Will Smith) from 2007 and a straight to home video release, also from 2007, called I Am Omega. Of the four, I still haven’t got around to watching that last yet but I was gifted with a copy almost two years ago and it’s gaining traction and moving to the top of my “to watch” pile finally, you’ll be glad to know. Hoping to check that one out before the end of the year.

Matheson was reported to be unhappy with the Vincent Price version of his book but I’d have to say that, of the film adaptations I’ve seen of it, that first version is the one that’s closest to the novel. In the book the main protagonist is the sole survivor, kind of, of a virus that wipes out the world and either kills the rest of the population or turns them into vampires. And I mean vampires... proper blood sucking, daylight fearing vampires. The main protagonist spends most of his time hunting them out by day, banging stakes through their hearts and holing up at night.

The Price movie follows this pretty well, as far as I can remember, but if The Last Man On Earth is a version of I Am Legend that Matheson wasn’t happy with, I can’t even imagine what he made of The Omega Man. It’s here that I should go on record saying that, although I love all three movie versions of the book I’ve seen, The Omega Man is by far my favourite of them because it’s just plain, outright fun.

Starting off with Neville, the main protagonist played by Charlton Heston, riding around the city in the far future of... um... 1977, we hear Max Steiner’s theme from A Summer’s Place on the 8 track he puts in the car stereo... before he stops and spots something moving in one of the windows. He immediately stands up in his car, pulls a machine gun from the passenger seat, and opens fire at the window before driving off into the opening credits, with Ron Grainer’s haunting main titles playing over shots of him driving around the deserted city.

Charlton Heston was fast becoming the “go to” man for this kind of film which belongs as part of a collective pre-Star Wars science fiction strike, launched at cinema directly from Hollywood in the late sixties up to the mid-seventies. These films commonly projected cynical and depressing dystopian futures which were popular in their gritty depiction of a world that spiralled off into decay, or in this case, is the inherited fall out from an apocalyptic virus. Heston had recently proven himself suited to this kind of movie with his appearances in Planet Of The Apes and Beneath The Planet Of The Apes and would do so again, after this, with his turn as the main protagonist in Edward G. Robinson’s final film, Soylent Green. Actors such as Yul Brinner, James Caan and a various others were also getting good roles in similarly grim science fiction movies such as Westworld, The Ultimate Warrior, Rollerball, Silent Running and Logan’s Run (which was about the last of the cycle before Star Wars hit and changed the course of on-screen science-fiction forever).

The Omega Man firmly belongs in this camp and, as you may expect, Heston proves himself a pretty good actor as he slowly starts going mad and talking to himself before coming across a bunch of survivors who also have the plague... teaming up with them to find the cure made from in his own blood.

The film finishes both cynically and hopefully with a bittersweet conclusion that more or less mirrors the book without actually fully grasping the concept that the creatures Neville has been hunting for his own survival are actually more afraid of him than he is of them. To them he has become a legend, hence the title of the original novel.

The movie tries to do the novel in very basic structure, and does attempt to address that issue... but really only pays it lip service. The vampires have been replaced by light sensitive, virus infected mutants and any references to vampiric myth has been unequivocally vanquished from the movie. But still, it’s got guns, a babe (in Rosalind Cash) and some “right on” hippy values thrown in as a metaphor created by the fate that has befallen the human race. Like I said, it may not be accurate to the book but it is fun...

It’s also kinda groovy with Ron Grainers score really knocking it out of the park and clear across the world. Even from the opening titles you know this score is going to be special. Grainer was mostly known for TV work, writing familiar themes such as the opening titles music of The Prisoner and, as realised by Delia Derbyshire, the main signature theme for Doctor Who. But he did do a few movies and was known for bringing in some unusual instruments from his personal collection to go in certain scores, like the water bell on this score. The music in this is absolutely perfect and I don’t know why Grainer didn’t get a hell of a lot of other big Hollywood movie gigs off the back of this. I can’t believe it took something like 30 years just to get a limited edition CD of this released (now in it’s remastered and corrected second incarnation from the Film Score Monthly label). Some of the action cues sound a little like his music for The Prisoner but I think this should maybe just be attributed to his style and, frankly, I think this is one of the best scores written for a movie. Why they didn’t make a big thing of this one I’ll never know.

The action is fast and furious in places and the performances are all fine, especially Heston’s man living with himself and Anthony Zerbe as the head of “the family” of mutants, although his preachy, pseudo-religioso performance does start to grate a bit towards the end. There’s a strong Christ analogy at the finish which is not exactly subtle and that fits right in with the general zeitgeist of the time, methinks. Whether you like it or not, I think I’d have to peg The Omega Man as a sci-fi classic... a film that I’m likely to travel back to every few years (not like the other versions I’ve seen). Matheson probably wasn’t best pleased with this version, which does tend to subvert his original narrative into other concerns of the screenwriters, but if you can pull yourself away from the template of the original (and excellent) novel then I think, if you’re a fan of science fiction, you may find The Omega Man worth taking a good, long look at.