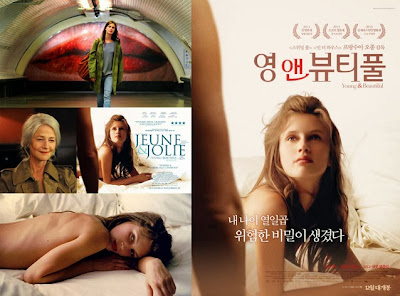 Jeune & Jolie
2013 France
Directed by François Ozon
Just about still playing at cinemas in the UK if you’re quick.

I always find director Françoise Ozon a little hit and miss, truth be told. But even when it’s a bit of a miss, I still tend to appreciate his stuff, on the rare occasions it’s actually advertised enough that I’ll get to hear about it before it passes me by at the cinema. I nearly missed this one and I’m angry that my local Cineworld didn’t bother showing it when it was released back in November. They’re getting worse and worse at showing anything much other than US blockbuster type movies these days.

I didn’t really want to brave a trip out on 27th December to go to London and pay loads more money than I normally would to see a film, to be honest, but I figured if this one was good enough it might make my best movies of 2013 list and I see so few contemporary foreign films nowadays that I really wanted to take in something different to my usual escapist fodder... I was much better at the whole World Cinema scene when I was a student, to be sure.

Now that I’ve done so, I’d have to say that Jeune & Jolie is a pretty good movie. It’s not exactly what I’d classify as a hit or a miss, by my standards anyway. It sits there somewhere in between but it carries itself well with its paired down sense of what a story is and isn’t and, like a small poem where you have to concentrate and look harder because the minimal trickle of words entices you into thinking there’s something more in there that requires your attention, the film holds you in its grip over its short running time and it doesn’t get boring at any point.

This one centres on a 17 year old girl’s decision to become a prostitute and Ozon’s lens takes a chance to almost glamourise the lead actress with his voyeuristic way of framing her and concentrating on her physical beauty and the expression of her contemplation of her life, without sensationalising it or exploiting it in the overtly sexual way that many directors might do, either as a strategy or subconsciously.

The really big thing for me about this film is the ambivalence inherent within the camera eye’s stance in making a value call on the main protagonist Isabelle’s career path as a sex worker and the unwillingness of both her character and the film to depict this as either a positive or a negative. What the film does do, however, is point out both the innefectiveness and the hypocrisy of those standing in judgement around the central lead’s “part-time activities”... and this is something I really value. It’s refreshing to find a central character who’s a sex worker but not one trying to justify her own decisions and if some may see Isabelle as something of an emotional cypher, I think that’s a pretty good call.

Personally, I think, since their seems to be no real financial motivation to the character, who keeps the huge amounts of money she makes hidden away from her parents... unspent, that she enjoys something of the life she has made for herself away from her family, to the point where the sexuality becomes something of an addiction (like sex usually does become to most people) and I think it’s pertinent that the character, when she is found out due to one of the negative aspects of her job colliding with the outside world in the form of the police, keeps her old mobile sim card with all her client numbers and contacts for use at a point when she has run the gauntlet of counselling and family misunderstanding. She obviously had every intention of returning to her life of prostitution when all the fuss has died down.

There are two key points in the film which I think are good Rosetta Stone moments when it comes to decoding the character of Isabelle. One is when Charlotte Rampling, playing the widow of one of Isabelle’s regular clients, hires her to understand and almost relive her husband’s final liaison. It’s telling that Isabelle at first mistakes this gesture as a sexual encounter and is willing to jump in there and service the former wife to her former best client. The character is 17 and so is perhaps inexperienced enough at life to be anything other than willing to decode the liaison as a prospect rather than a mental autopsy... or is it that she’s actually a lot more confident than that?

The second of my key moments may shift towards the latter when Isabelle discovers the possibility that her mother might be having an affair. She doesn’t use this as much of a threat but more as a leveller to point out to her mother, and the audience, that she is being judged by standards which are unfairly being applied to her from an outside that clearly has no grasp of her personal confidence as a person to make the kinds of decisions about her life that she wants to. At least that’s the way I read it and I think it’s this confidence to a character who tends to give nothing away throughout the film’s running time (even a scene where she breaks down crying is perhaps best seen as a release of tension combined with survival strategy as opposed to a more pitched reaction) that really cements this film as something a little more stand out than the way it could easily have been moulded by another director.

The camera work is quite beautiful and mixes sweeping movement with curiously static and repetitive establishing shots which lend the piece a certain sense of visual anchoring... which is a nice touch. The performances are all pretty convincing and interesting too. The 1970s fly-on-the-wall approach to the material, despite an abundance in some places of camera motion, allows these performances to shine through in the way they need to in order to pull the audience in and encourage suspension of disbelief.

My one real problem with the movie was the music strategy. The film has hardly anything in it that I noticed at all for the first half, apart from some songs used in a non-diegetic manner. This is an okay choice but then there is musical scoring later on in the film and, while this is a perfectly valid tactic of ratcheting things up to a certain level or changing the tone at some point during a film (Jerry Goldsmith’s score for Coma, for example, exists pretty much in only the last 45 or so minutes of the movie) I felt the scoring here was too thin and not quite up to the task whereas, the soundscape of the earlier sequences without music were already creating a certain audio intensity without needing to throw music in as well... and since I love movie scores it really hurts me to say that.

That minor criticism aside, though, Jeune & Jolie is a pretty good movie if you fancy seeing something French which deals with adult themes (although some of the characters themselves don’t respond in much of an adult manner in some sequences within the film). It’s not one I’d go out of my way to watch again but, certainly, it’s not one I’d run to avoid seeing again if the opportunity arose and it may, you never know, make my years best new release list. I’’m not sure yet but you can find out about that one in a few days, methinks. The film is certainly worth a peek, though, if you feel like a trip to the cinema.