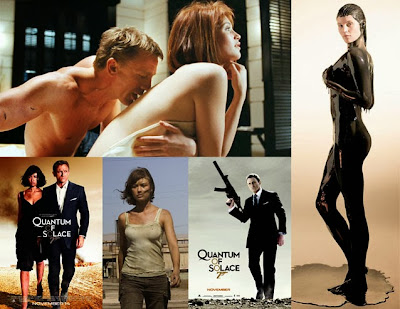 Quantum of Solace marks the last of the EON James Bond films I have to review for a while (I already reviewed the next in the series, Skyfall,  as my first Bond review here).

When I watched this movie again just recently, after five years had passed, I would have to say that it surprised me in that I realised it wasn’t quite as bad as Die Another Day or Octopussy. That being said, those two are the only Bond films I can think of that I’d rather be watching less than this one. Now I really liked World War Z by this same director, so I don’t know why I didn’t pick up on some of the negative things I’ll throw up here in that movie too... but I understand that the editing schedule on this Bond film was quite, let’s say, challenging and I’m guessing maybe some corners were cut where reshoots may have been better? I don’t know... purely speculating here.

There are some really good things in this movie but they are completely destroyed by the negative factors, as far as I’m concerned. Now, if you read my Casino Royale review, you’ll already know I don’t rate Craig as a credible Bond. He just doesn’t quite look or act the part... and that’s such a shame because he is a great actor and he does an excellent job as a toughie here in the Bond films. In fact, I would go so far as to say he plays an incredible modern action hero... just not a credible Bond. Which I think is a shame because I don’t think it’s even his fault. I’m guessing here that the style of the character is being moulded into something deliberately different by the producers? Who knows?

Anyhow, that aside, this movie suffers from a lot of problems. The plot, which picks up from the previous film, just seems generally thin nonsense all the way through. And Bond acts completely and utterly stupidly throughout the majority of the movie.

I find it a little bit of a strain on the credibility of the central protagonist, whether he’s a credible Bond or not, to be able to think a way out of some unbelievably tough traps but at the same time, is unable to keep himself reigned in so he kills every lead he has to the solving of the “spy mystery” element of the story without even stopping to ask them questions. Seriously, why bother to track your leads down if you’re just going to kill them and then, quite by accident, find another clue somewhere else. This seems to me to be really sloppy writing but... I don’t know what those big studio writers have to go through, so maybe this stuff gets re-shaped and gets away from them via studio intervention until the story kinda goes out the window? Again, I’m just guessing here.

And then there’s the editing thing again. I don’t know if it’s the lack of coverage of actual footage or a conscious decision to go with a tougher, more aggressive editing style but the action sequences in this film are confusing to the point where they become an incomprehensible mess for the most part. Peter Hunt was quite successful when he introduced a more aggressive style into the series back in the sixties Bond films but this is just a melange of half shots put together at a pace which seriously jeopardises your ability to read what is going on or, at least, make the metaphorical visual connections to take you into the next shot at the kind of level required to have a coherent reading.

And it’s not just the action scenes that do this in Quantum Of Solace either. There seems to be an abundance of the same sequence shot from multiple different angles and movement speeds in even some quite sedate scenes... to the point where your eye is just flicking around almost randomly on each cut to try to get your bearings in the piece. This is something I didn’t realise could even happen in a movie before but, yep, you can kind of shoot things as such a melange that basic slow shots just don’t work together when they are edited. It’s like the director or editor took the scene five different ways and instead of editing them into something which could easily be understood... just kinda threw everything into the mix and hoped for the best. Now I don’t want to hurt anyone’s feelings here and I’m guessing this stuff was happening purely because of the shortened editing schedule... but that’s how I perceived things anyway.

There are a few nice things about the movie, of course.

Thing one... it has one of the best Bond songs in a while. It’s different but it doesn’t push the envelope too far away from classic Bond like Madonna’s Die Another Day did... and neither is it so dreary that I couldn’t make it through even one playing of the single version like the Oscar winning Skyfall song was. This one is just a pretty good Bond song, Another Way To Die, and it’s just a shame, since this move actually does have a title that comes from an original Ian Fleming Bond story, that the lyricist couldn’t work in the movie title somewhere... even if it had just been a single mention like in the opening title song to The Spy Who Loved Me.

Arnold’s score tries hard but it doesn’t sparkle like his first two outings. It’s nothing special but it does provide a certain amount of musical continuity with Casino Royale and I’d like to see him have another crack at a Bond score sometime (whether that will happen again, I don’t know, but I’d like to think the producers will call on him again, much like they used to go back to John Barry once in a while).

The other good thing in this film is, simply, Gemma Arterton... in a small role in which she makes her presence truly felt before being wasted in a Goldfinger tribute where she is killed by being covered naked in oil (as opposed to gold). Such a shame because I believe she could have made a good recurring character for the series.

The other notable thing I can think of about this movie is that Jeffrey Wright becomes only the second actor in the series to play the Felix Leiter character for a second time. Wonderful performance but, alas, like Craig’s portrayal of Bond, this incarnation of Leiter is nothing like the one in the novels (I think Jack Lord’s performance in Dr. No kinda hit the nail on the head in that respect).

And that’s all I’ve got to say on this one, I’m afraid. Not a great movie but entertaining enough, if you just let it wash over you without trying to read too much into it.

I’m really glad this is my last Bond movie review for a while. Over the last year I’ve reviewed all the  EON Bonds and, I will get around to taking another look at the four non-EON Bond films sometime in the future for this Blog... but for now I’m done with Bond. But you can take a look at all my Bond reviews by clicking on the relevant titles here...

Dr. No
From Russia With Love
Goldfinger
Thunderball
You Only Live Twice
On Her Majesty’s Secret Service
Diamonds Are Forever
Live And Let Die
The Man With The Golden Gun
The Spy Who Loved Me
Moonraker
For Your Eyes Only
Octopussy
A View To A Kill
The LIving Daylights
Licence To Kill
GoldenEye
Tomorrow Never Dies
The World Is Not Enough
Die Another Day
Casino Royale
Quantum Of Solace
Skyfall
S.P.E.C.T.R.E