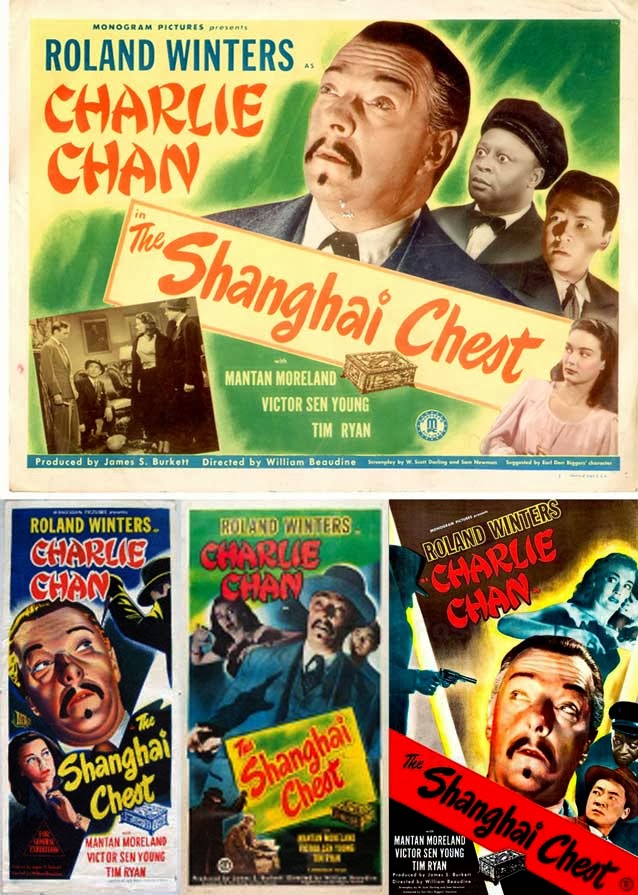 Okay, it’s Charlie Chan time again. This is the third of the Roland Winters “end phase” of the Charlie Chan films, which were so popular that they’d racked up over forty films by this point. This is also the third one I’ve seen him in and I think, either he’s giving a slightly better performance than usual and has relaxed into the role by this point or... it may be that I’ve just finally gotten used to him.

The plot in this one isn’t bad though and the general writing and pacing of it really brings out the best of the performers, one of whom I was pleased to see, is Tristram Coffin, one of my favourite B-movie, serial and TV guys... perhaps best known for his portrayal of the title character in the Republic serial King Of The Rocket Men. Even Victor Sen Yung and Mantan Moreland, as Number Two son and chauffeur Birmingham Brown respectively, are back on form. Their comedy shenanigans are at their usual pace but they seem to be slightly better suited to slotting into the general story of this one and, though they are certainly used as padding at one point to increase the running time of the movie, they certainly don’t feel like they are being used in this way.

The plot is intricate in that it involves a murderer who is a) covering the tracks of his real motive by serially murdering from a list of potential victims in alphabetical order and b) is leaving the fingerprints of a dead and executed victim of the justice system behind at the scenes of the crimes to make it look like “revenge from the grave”. It all works pretty well and because of the confusion with the dead man’s fingerprints, we even get a nice scene with Charlie Chan experimenting with various chemicals, latex gloves and fingerprints (with Birmingham’s assistance) to demonstrate the possibility that a dead persons fingerprints can, indeed, be transferred onto various places with the aid of science.

I’m pretty sure I’ve seen the plot used here before, more than once, possibly even on a Chan movie, but I can’t remember just where. It doesn’t really matter though. This isn’t going to appeal to a lot of people but those who are fans of the Roland Winters Charlie Chan films should appreciate this one as being one of his better ones. The aphorisms still aren’t up to scratch but Winters performance seems a lot more confident and a little faster in the role.

There’s a slightly stronger racist element at play too, but it falls into the “quaint and that’s the way it was back then” category for me... although I can see why people would get upset about it. I’m talking about a scene where Sen Yung sends Mantan Moreland into the windows of a house on a dark night instead of going himself because Mantan will be “harder to see in the dark”. Not a great moment of political correctness, to be sure, but Moreland seems to have had no problem accepting his regular wage from the exploitation of his Brimingham Brown role (a role which he plays extremely well in most, if not all, of his Charlie Chan outings) and I doubt anyone was much worried about it at the time. I’m aware I’m watching this from a different historical context so I’m not going to lose any sleep over it, to be honest.

The one thing which lets down the mystery side of things here is the fact that we always see the killer as a shadowy figure and never see his face until he is revealed at the end. However, since the murderer is fairly tall and stocky, and since the cast is fairly limited, it doesn’t take too long for the viewer to figure out who the real culprit is, on this one. There’s really only one person of that stature on the set... so that’s a bit of a shame. What is interesting, though, is that the film features a scene where the killer uses a stubby, six shooter revolver with a silencer screwed on the end. I don’t know when the silencer was first used on film but I bet this is one of the earlier appearances of it on screen (and if anyone does know... please drop me a line).

One strange thing is that there seems to be a few throwaway scenes with characters that feel like they are meant to lead to something bigger as links to clues but which are then dropped after they’ve been set up. A shady character in an insurance agency who gives Chan the runaround, for instance, makes a sinister phone call right after he leaves the building and then this is not mentioned again throughout the film. I think the script was possibly rewritten as it was being filmed and certain scenes became casualties of a hasty rewrite along the way. Not the best way to make a movie but that’s my guess and, after all, it was churned out by Monogram.

Another curio is that Charlie Chan is not from Shanghai and there is no “chest” in the film... which makes the title of the movie, being Shanghai Chest and all, possibly a greater mystery than the one which Chan and his colleagues are so intent on solving during the film’s short running time. But enough said on that one, I suspect. Cleverer minds than mine can work out the reasons why this is so.

These last attempts to capture Chan’s waning popularity by Monogram are nowhere near a match for the Warner Oland and Sydney Toler films, but Chan enthusiasts should enjoy this one and it’s certainly a lot better than Docks Of New Orleans (reviewed here). Give it a try sometime if you’re feeling particularly Chanthusiastic.
Posted by NUTS4R2 at 18:17