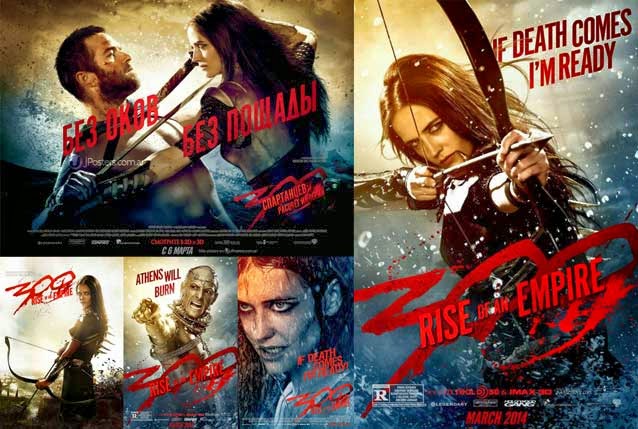 Now, to be fair, Robocop 2 taught me long ago of the complete unreliability of the phrase “You can’t go wrong with a bit of Frank Miller” but I thought the original 300 was a pretty good attempt at getting the look and feel of his writing and illustration on screen in a fairly entertaining manner. I wasn’t too thrilled when I heard there was going to be a sequel and, to be honest, I was in two minds about bothering with it.

One thing that changed my mind and that was the fact that the trailers revealed that Eva Green was playing a villainous spin on the character of Artemisia in this one. I really like that actress quite a bit and I was hoping that she’d read the script before filming and made an informed choice about being involved in this one. So that was the way I found myself waiting in line for this movie, anyway.

What I didn’t know is that Frank Miller, by the looks of things, hasn’t had all that much involvement in this sequel to the movie of his former comic book. I understand that he was writing a sequel comic specifically so it could be filmed, called Xerxes, but that the story in the screenplay was changed quite a bit from that and, to boot, he’s apparently only written the first two issues so far. So not much of Miller’s spin on what a sequel might be like seems to have made its way into this film, I’m afraid.

Also, with regards to recapturing the spirit of the vision of Frank Miller, I’d have to say that 300: Rise Of An Empire has a little less of a graphic look than the first movie. It’s certainly highly stylised, don’t get me wrong, and frankly it looks fantastic... but the “is it a comic book panel or is it live action?” kind of visual attitude deployed at key, strategic moments throughout the first film seems to have been ratcheted down, somewhat... or at least that’s how it felt to me.

The action in 300: Rise Of An Empire takes place before, during and after the events of the first movie and, although this is a valid, and quite interesting at times, solution to the path that a sequel might take, the story does seem to leave much to be desired. It kinda works, but it does seem a bit hollow and, also, the dialogue felt equally vapid to me in a lot of places, which didn’t help me accept the movie too much, even though some serious stabs at humour are attempted throughout... with some success in places and then, in other places, where it just kinda falls flat. The actors are all really great in this film but they just don’t have lines of any real weight or substance for the majority of their screen time, so that gives them all a bit of a grandiose feel, I think.

However, what that leaves us with is a film which still looks quite good and with more action scenes than you can shake a bloody spear at. The spectacle is enough, in this case, to at least have yourself a fairly good time at the cinema... although the action does keep stuttering in and out of slow motion to highlight moments of battle and, it has to be said, this does get quite irritating after a while (where “after a while” equals 30 seconds). There are lots of overly gory sequences played out, for example, which the censors may not have let the film-makers get away with if they had been used in the context of a horror movie. Here, though, the “still stylised to an extent above and beyond the realms of anything like reality” context of the violent content, with lashings of blood literally tracing slow motion splashes across the screen at various intervals, seems to be more acceptable to our current, self appointed and terribly sinister moral guardians than if the film were presented in a less fairy tale-like manner, I suspect.

One of the more puzzling things I felt myself contemplating in the cinema, as I became more and more jaded to the incredible amount of mindless but fairly beautiful on-screen violence, was the curious incidents, on a number of occasions, where the CGI blood artifically splashes the lens of the camera, like a drop of watery spray hitting the equipment, which then disappears when we cut to another shot. Yes, I know stuff like water splashes and lens flare are deliberately added on with CGI these days to try to manipulate a more “fly on the wall” connection with the audience... but that’s precisely my point of why I think this kind of effect is out of place here. Surely, when you are taking time and patience to give the film a “through the looking glass”, mythical comic book look... the last thing you want to be trying to do is then bring the viewer back down to reality, no? I’m not saying it doesn’t work (well, okay, it obviously didn’t work for me... just popped me straight out of the movie. I doubt if the director was going for “the Goddard effect” here), but I do find the decision to utilise this kind of visual technique quite bizarre within the context of the other artistic decisions going on here.

And of course, the other big special effect the producers have going for them here is Eva Green.

Not only does she come across as a strong and powerful warrior, utilising her almost trademark sideways glances and facial expressions to convey a total “don’t f*** with me, sweetheart” attitude to the characters surrounding her (not to mention the audience), but she also goes topless while brandishing her sword for a very (too) short sequence. Given that I saw the 3D version of the movie, I found this to be very appealing and, frankly, the best of all the eye candy and other technical jiggery pokery found on the screen during this movie’s running time. A much appreciated turn out by Eva, once again.

What I didn’t appreciate too much about the visual content, however, was the almost total lack of surrealistic and just plain odd imagery in this movie. The first 300 film got quite freakish, if I am recalling correctly, whenever you got into the scenes with Xerxes and his entourage. In this one, everything seems mostly within the realms of the everyday and somehow less bizarre than I would have liked. So that was a bit of a disappointment, then.

So there you have it. 300: Rise Of An Empire is not a patch on the original 300, and it feels like it has a lot less substance behind it than even that movie had on offer... but at least it all looks lovely and while I’m not sure if I’ll ever give it a second spin when it comes out on Blu Ray or not, there are certainly a lot worse ways of spending your time at the cinema at the moment. Especially if you have a lot of affection for the original movie... you probably won’t want to miss this one, in that case, because of the way it interpenetrates into the timeline of the first movie. If you really didn’t like the first one, however, this is less than more of the same... so those of you in that camp may want to miss this one.