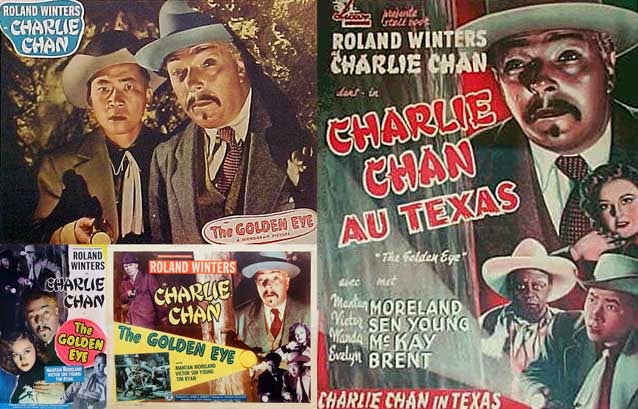 Well it looks like this may be my last Charlie Chan movie review for a little while... until either Warners or some other interested party decide to commercially release the few missing movies I don’t have yet... or until I maybe go back to the start and watch them all over again.

This is the fourth of the six movies headlining Roland Winters in the role of Chan and, blimey, I’m finally starting to get used to the guy. Either he’s grown on me big time or the writing on this one is more able to play to the strengths of the actor and the way he performs the role. Either way, this movie is a pretty fun romp in the series and certainly the best of the Winters’ films I’ve seen to date.

One of the reasons for this may be because Chan is totally on the case in this one and has a lot more to do with the story than usual... not just leaving it to other characters to play out the running time. Don’t get me wrong, this film still has a lot of supporting players including the second of three regular appearances by Tim Ryan as police “Lt. Mike” as Chan calls him... who does a great job acting as a whacky,  undercover drunk (then immediately sobering when he visits Chan to exchange information). Some great and thoroughly entertaining acting going on here in this one. And, of course, the later Chan’s would be incomplete without the double act routines of Victor Sen Yung as Number Two Son and Mantan Moreland as chauffeur Birmingham Brown. Their scenes are a little less frequent than usual, which allows Winters and Ryan to shine, but their presence is still very much felt and a wonderful bit of business takes place at the start where they are dressed in dodgy cowboy outfits, packing to go under cover in a resort Western town (the Lazy Y Ranch) which is situated near The Golden Eye gold mine... which gives this film its title.

The plot is pretty obvious in both its execution and denouement, with a mystery involving a non profitable gold mine which has suddenly become very profitable for absolutely no reason... you pretty much figure out what is going on there right from the bat. However, as with a lot of these kinds of formulaic films with running characters, the plots are merely a skeleton to hang some nice scenes on which show the characters you know and love in their best light and, like I said earlier, this one’s a fun old romp.

There’s kind of a “surprise” villain in this one too but, honestly, if you didn’t see that one coming then you’ve not been watching enough mystery movies during your life. There are no "real" surprises here but plenty of smiles and chuckles and I’m really glad to see Winters really getting into the part here... even if Chan’s days as a running, cinematic icon were, sadly, numbered.

There’s a very strange bit right at the end where, after Chan has revealed the solution to the mystery and the various bad guys have been captured or met with death, Mantan Moreland gets a last say in the movie. Birmingham Brown steps right out of the scene, walks over to the camera and breaks the “fourth wall” by talking to the audience in a little “wrap up” monologue all his own. I don’t recall ever seeing this happen in a Charlie Chan movie before and I’m wondering if this was something the director was trying out as a feature to use in forthcoming films in the series. Not having access to the final two stories, as yet, this isn’t something I am going to easily find out, I suspect.

As Chan films go, The Golden Eye goes a long way to capturing the magic in a bottle of some of the Warner Oland and Sydney Toler movies in the series and I have to say I thoroughly enjoyed this one. Just hoping somebody will release the missing Chans to us sometime soon though. I need my opium fix.
Posted by NUTS4R2 at 12:20