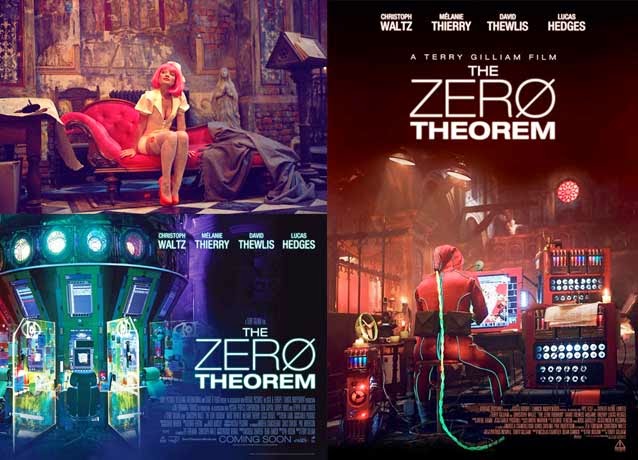 Warning: Kind of a big spoiler in here about the end of the movie, depending on your point of view.

Terry Gilliam has always been a bit of a directing hero for me... so I wish I didn’t feel like I have to write this review and make the kind of judgement I do on it. I alluded to my experiences with The Zero Theorem in my previous review of Under The Skin (reviewed here) and I’m afraid I had less than a good time with this one.

I find his films, themselves, a bit hit or miss but, ultimately, Gilliam is an individual artist (yeah, he’s an auteur, for sure), mostly uncompromising (as far as I know) and always interesting. My favourites of his films: Brazil, The Adventures Of Baron Munchhausen, The Fisher King and 12 Monkeys are all pretty incredible in their own way, each of them either a major or minor masterpiece, as far as I’m concerned. And The Zero Theorem is no different in its inventiveness than any of these four movies... which is why it annoys me to deliver a harsher call on this one.

The Zero Theorem has a hell of a lot going for it, though. So let’s get all the good stuff out of the way first.

For starters, it’s got absolutely kick ass actors including a bald Christoph Waltz, who is always watchable (even in The Green Hornet, reviewed here) and, another of my personal favourites, David Thewlis, playing the line manager at the company Waltz works for. All the supporting actors were pretty cool too and, added to this, you have an intricate and art directed to death, dystopian world created for them to all work in. An alternative version of our world perhaps, in the future, where advertising and hard edged consumerism has taken over and trivialised the human existence even more... like we all knew it would. We should have heeded Philip K. Dick when we had the chance. It is a highly detailed clutter of a world with a slightly unreal feeling to it (which I’m sure is deliberate) and a sense of chaos which is directly reflective of the times we are now, unfortunately, living in... and it all works really well.

Conceptually this film is, still, a bit of a masterwork. The “crunching” which is the sole purpose of our hero Qohen Leth (played by Waltz) and his co-workers, is a job which is laboured with game-pads, bicycles, computer screens and software, which comes in a liquid form, to the extent that the actual understanding of the mechanism of the work the people in the film do is just a notch beyond our comprehension... we just see it as a video game analogy of something approximating hard work but conceived in a way which is alien to our way of thinking at present. Which of course further enhances the far flung future aspect of the environment that the film’s main protagonist inhabits.

After an encounter at a party in which Qohen finally gets to talk to the elusive “management”, he is reassigned to work from home on a concept called The Zero Theorem. His goal, as we perceive it, is to guide blocks of formula into walls in a virtual landscape to prove the idea that “Zero must equal 100%” without destroying the integrity of the formula and causing all the formula built structures in the framework to come tumbling down, which they inevitably do... frequently. This is a special project which has already, over the years, seen many people burn-out while trying to solve it and, by the end of the film, when Qohen has abandoned the girl who he loves for his all important work and the promise of his delusion of a “life affirming” phone call, we find that Qohen really is no different from all the others who have tried to solve this apparently unsolvable puzzle. Or is he? With his final descent we are, perhaps, left with the assumption that, ulitimately, life really does have no meaning and that Zero, does indeed, equal 100%. In fact, by the end of the film, I’m not even sure the main character even ever existed as anything more than a virtual reality within the memory banks of a computer where he thinks he works... nor even that the computer, indeed, like anything in the movie, even exists.

Who is doing the asking, for example? Qohen’s boss or God? And is there a difference? And does it matter? The simple answer, perhaps, is no... who cares?

And therein lies my main problem with the movie... I don’t care and, honestly, if Gilliam is trying to prove that either life has no purpose, or at least that life has no purpose that man is able to comprehend, then thanks but... like most people I imagine... I already knew that. Life is pretty meaningless and seems to be about chasing bits of money which are completely unimportant.

Now I’ve often said on here that the end of a movie doesn’t really matter if the build up is good. Like sex, a good tease as a set up doesn’t mean you have to finish in the most traditional way if you don’t want to... and I still say that. The Zero Theorem is nothing, if not one long tease of a movie. But something left me feeling underwhelmed with it... it’s like I was wrestling and hanging on with complex issues dressed up as fun but it felt like there was too much melting ice cream and nothing, really, of the main meal... to mix my metaphors somewhat. It just felt like empty window dressing to get us to a point where the writer of the movie says... “Hey, you know what? It’s been fun but I’m going now. Please lock up on your way out.”

It felt anti-climactic and, although I’m a big fan of movies crammed with exploratory ideas, and this film has them in spades, I was just left unimpressed and, worse, uninterested in the events on screen. Tellingly, this is not the kind of movie I could watch as a repeat viewing... which seems a strange thing for me to be saying about a Terry Gilliam film but, there you have it, I’ve said it and I’m disappointed by that but I have to be honest about this stuff.

I wouldn’t recommend this movie to anyone who isn’t either a) a big fan of Gilliam’s work (which I am) or b) a big fan of movies with a lot of cluttered concepts in them (which I also am)... and even then, it would be to see it as a bit of a talking point rather than something I would really urge that kind of person to look at as a good time at the movies. This one gets a big zero from me, I’m sorry to say, but it doesn’t really matter in the grand scheme of things... I’m still looking forward to seeing the next Terry Gilliam movie already because, after all, when he’s good he’s great but when he’s bad... he’s interesting.
Posted by NUTS4R2 at 19:37