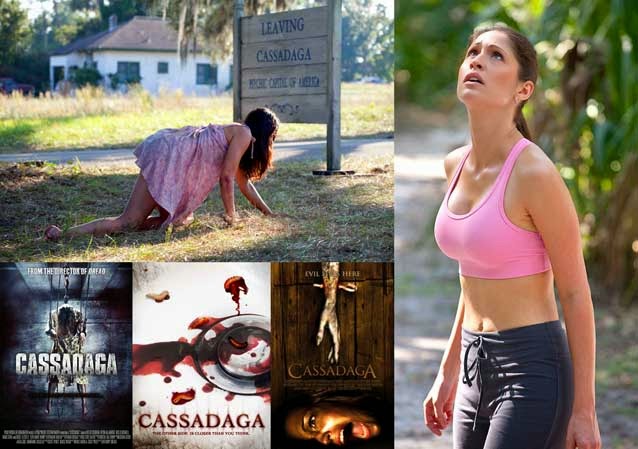 A String In The Tale

Warning: For me to properly talk about this movie I need to spoil the film’s unique premise. However, it’s a curious situation because, although I would have rather have gone into the film not knowing what this was, the truth is that, if I hadn’t known about the nature of the villain of the piece here, then I wouldn’t have bothered seeking the film out in the first place. So it’s kind of a Catch 22 and I don’t think it’s necessarily something that should be hidden, especially when the cover of the DVD kind of reveals it anyway, to a certain extent.

Cassadaga is a film I watched because I saw a mini video review by Lauren Rebecca Reid (@ScreamQueenLR) highlighting the film and I found the premise vaguely intriguing. There’s a link to her piece on Cassadaga at the end of this review.

Cassadaga is, apparently, a place in Florida which is noted to be a hot spot for psychic phenomena... so it’s a natural to set a movie about unexplained, spooky shenanigans here... although, as you’ll find out, the strong supernatural element here is not completely what this film is about.

Kelen Coleman plays Lily, a deaf orphan art class teacher who shares a strong bond with her younger sister, who she loses to a car accident in the first five minutes of the movie. When she decides to move on with her life, she wins a scholarship to stay in a large house and focus on her own work, while also taking art lessons. Trying to settle in, her soon to be new romantic interest geezah, Mike, introduces her to a couple of his friends and they go to see a local psychic (this is obviously a smooth move for a first date in this town). In one of the film’s more inventive moments, a record player is used to channel the voice of the dead, which even Lily can hear in her head, somehow, and dead Lily’s sister is talking to her until another spirit grabs Lily and puts her into a trance where “glimpses” of something are revealed to her.

Now this is one of the problems with Cassadaga. In its attempt to be a scary movie, which it looks like it’s trying to be from all the horror style window dressing on display, it becomes apparent right from this moment that this is one of those movies which operate in that specific sub-genre of wronged spirits trying to warn and help the living... while also getting themselves in a state where they can properly rest. As such, there’s no real scary element in this film since, although the ghost does tend to come out of nowhere and the director uses visual misdirection so you don’t see her coming, you know it means our main protagonists no harm... so any scare value in the movie comes from the serial killer of whom the ghostly spirit was a victim... and that’s a shame. Especially as I don’t tend to see serial killers, or any other kind of “human monster”, as something to be scared of... at least not in a horror movie context anyway.

Which brings me to the main spoiler. Cassadaga has a serial killer who, because of some bizarre childhood thing shown as part of the pre-credits, (which is nowhere near as well put together as the childhood sequence opening Argento’s Deep Red aka Profondo Rosso, but still quite well shot and colourfully lit, actually) has a penchant in later life for kidnapping women. He then proceeds to cut off the bottom of their legs and arms, just below the joints, attach ends to the stumps in metal, put various eyelet hooks through the limbs in question... and then re-attach these to the “still alive” victims so he can turn them into life-size marionette puppets.

So there you go. That’s the spoiler and also the other bit of real inventiveness in the movie. I don’t think I remember seeing this done on screen before... but I am getting old now so I may be wrong. It’s not done badly, either, although I think a little more could have been made of these sequences in terms of giving them a little extra foregrounding in the main story than what we have here.

Balancing that, we have some weak moments.

One is a technique, used in two sequences, where a person in the story is crosscut with a flashback of that person in the story in a different scene. The way these are linked in is kinda strange and although, certainly, in one of the two sequences, the cross-cutting does at least serve to forward the momentum in the investigation which is, by this point, the main thrust of the narrative, I found something clumsy about doing it in this way in both of the instances this occurred. Frankly, I feel the scenes would have been better served playing as individual moments but, especially in the case of the first scene, which is at the tail end of the opening credits, I can understand that the director may not have wanted to slow things down anymore... it’s certainly a way of maintaining a faster pace to get the information across... I just felt it was distracting in the overall make up of this movie and so, for me, it popped me out where I should have been immersed.

The other thing is that the main romantic interest kinda drops out of the story about two thirds of the way into the film and doesn’t return to the narrative in any way, shape or form at all (unless you happen to stay for the little, post end credits scene) and no sense of resolution or closure is given to this character. Now, in terms of classic film making, this is certainly not an unknown thing to do. Take Hitchcock’s masterpiece Vertigo, for example. Unless you were fortunate enough to see the version with the alternate ending (which I think might be the one I saw on TV as a kid, actually) then the brilliant character of Midge, played by Barbara Bel Geddes, disappears form the narrative halfway through the picture and is discarded completely from that point. Her use as a story element has been served and Hitchcock, unwisely in my opinion, removes that character from the playing field.

In Cassadaga, the same thing happens... it’s almost like the character is only there to fulfil certain points in the plot and then, when it’s useful to not have him there anymore, an excuse is found to just throw him out of the story, never to return again... although, by the end game of the movie, you are honestly expecting him to. So that left me feeling a little unresolved... but that’s not necessarily a bad thing and I didn’t find it too distracting. At least he didn’t rush in at the end like some kind of deus ex machina and save the heroine from certain death. In fact, they have a different stand in for that inevitable moment which, while also a cliché, does kinda work.

Well the acting is all good and the leading lady, who I’ve not seen in anything before, is kinda hot. So that helped me a lot. The atmosphere works well in some sequences, although that’s counter balanced by a lack of genuine scares. The shot design, lighting and camera movement through this is all very good although, the editing choices do seem a little jumpy in terms of where we are chronologically in the narrative at times. It feels like some fill in scenes were lost along the way to bring the time down but, if that’s the case, then the film maybe suffers a little bit in that respect.

However, this movie is far more competent than a lot of these kinds of low budget horror films out there and it’s certainly very watchable and I probably enjoyed it a lot more than it sounds I did here, I think. Certainly one to watch if you’re into these kinds of films which, I’m guessing, maybe went straight to DVD over here? It’s unusual too, in the sense of having a lead heroine who is deaf and, once you get tired of watching out to see if the lead actress accidentally reacts to anything she hears rather than sees, is a pretty good spin although, again, I wish they’d made more of this fact to deliver a little more suspense at key points in the narrative.

Never mind, though. If you want to settle down to a nice, comfortable horror movie when you’ve next got some time on your hands, Cassadaga might be worth giving some of your time too. For Lauren Rebecca Reid’s short video piece on the movie, click here.
Posted by NUTS4R2 at 16:14