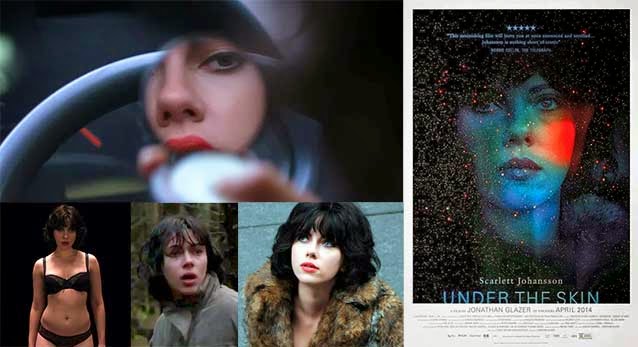 Skin And Bare It

Under The Skin
2014 UK
Directed by Jonathan Glazer
Playing at UK cinemas now.

Under The Skin is one of those films that exists in a certain space in cinema which allows you to bring your own baggage with you and create your own interpretations of what is going on within the material as it’s presented to you, to a certain degree. Films like this have a special, almost “Holy” place in cinema and they also tend to divide audiences quite heavily... at least that's what I usually observe. I saw two new cinema releases this weekend and both of these films had this kind of interpretive quality to them. However, the other one I saw failed in its intent spectacularly, in my opinion, because the message which I brought to/took from it seemed to be way less than the sum of its parts and the frames were, typically for the director of this other movie, crowded with ideas and details but... it all just felt like a lot of chaos for very little reward or insight at the end of it. I’ll get to all that in my review of that film when I write it. Check back here in a day or two for that one.

As far as Under The Skin goes, I think the qualities I just highlighted worked so well because the action of the characters and the space in which the actors performed them was, mostly, calm and tranquil, allowing the experience to very slowly let you explore what you think you are seeing in the movie. So much so, in fact, that some of the key sequences were deliberately uncluttered in what I personally believe were the language of metaphor rather than actual reality... although the film's director did have a tendency to keep upending my deductions of such matters as I was watching and, in one quite spectacular sequence, where a man’s internal organs, muscles and bones are very quickly extracted from his body, leaving only his skin floating around, I was forced to even question the nature of those similar scenes I had been viewing.

The always watchable Scarlett Johansson plays an alien creature who “wears” the skin of other people and uses this as a disguise, drifting from peron to person and place to place as a, for want of a better term, predator. She is not necessarily a sexual predator (I haven’t read the original novel on which this was based and, having seen this, now wish I had before I saw the movie, actually) but she uses the language, both minimally verbal and physically, of human sexuality to pick up her prey. She then devours them in a what I can only assume, in spite of a couple of sequences bordering on the cheerful art of the non sequitur for me, is a metaphor for the storage and consumption of human beings (represented by a black room with somebody undressing and following the disrobing Johansson, then slowly sinking step by step into a bizarre and dreamlike liquid storage state, before being eaten later).

The film, I am glad to say, was very minimal in dialogue throughout, which I prefer as I still tend to see cinema as a visually dominant form of art (although, bearing in mind my love of scoring, I really shouldn’t still feel this way). To ignore the music and sound design of this film, however, which at times become almost interchangeable as an ambient noise, probably created purely by the composer,  slowly creeps into the realm of sinister and unsettling music... would be a big mistake. While not technically atonal, the score still has the kind of power to both make you feel less at ease in places... it’s always pushed to the front of the sound mix in the “eating” sequences... and to tell you what’s coming next with an almost leitmotif style running through it, even though thematically it seems almost as alien as this film’s central character.

Starting off with Johansson discovering and practicing human vocalisations, which make important the world of sound to a certain extent, the character of the alien takes on a journey through the film where, if read one way, “she” becomes more humanistic as she is, perhaps, polluted by the sometimes troubled souls with whom she comes into contact. The director cannily punctuates the long stretches of calm, stealth and exploration which characterises the majority of the movie, with occasional stabs of sound and sometimes action which shock by their highlights in isolation, the way that somebody like Tarkovsky or Bergman may have chosen to highlight something within the overall consuming style of one of their works, perhaps. A sudden lively burst of conversation, a violent mob or a hardcore, aggressively lit dance club are all thrown into the mix as the main protagonist/antagonist, depending on how much you can identify with her, goes about her daily/nightly business. The visceral shock of these moments, which hit you like a muffled, comfortably wrapped, crash to your senses amidst a barren, meandering journey allows you, the audience, as a human spectator, to empathise with the way the character is able to handle these sudden changes in tempo and, if you’re like me, come closer to her viewpoint. Which I’m guessing was the director’s plan?

The film is adult in nature, at least in terms of there being tonnes of nudity and allusions to sexuality, but lit quite muddily in places... which lifts what could have been a gaudy, exploitative entertainment (and there’s nothing wrong with that) into something much more restrained and expressive of the kind of existence depicted here. Interestingly, because of the underlying nature of the creature’s easy target of human sexuality, and the kinds of people “she” has to plunder to sustain her on this planet (although there’s no real indication she is of extra-terrestrial origin, to be honest), the irony is that we learn as much, probably more, about the nature of the human condition from Johansson’s journey through it, than we do of the origin of her species and her purpose here other than just existing and eating. Again, I may or may not get more of that equation from the novel. And, of course, the irony is that she, too, seems to be growing to a new relationship with her encounters with humanity... and her final fate, which I certainly won’t reveal here, is a symptom of the naivety of not approaching such a changeable and unpredictable species such as humanity without a certain amount of caution and distrust.

Under The Skin is, I have to say, a film which I couldn’t fully comprehend on my first viewing, mainly due to the fact that I was trying to apply a certain logic to the visual metaphor and its final conclusions with certain characters. For example, the lack of the central character’s blindness to the condition of another character she encounters, said everything about her alien outlook but the final fate of this character seemed at odds with what I’d seen before, unless you see Johansson’s slow descent as one of empathy rather than consumption of something that didn’t agree with her digestive system (as I was initially taking this for as I watched).

I went into the cinema thinking that this would be a kind of female-centric version of Nicholas Roeg’s movie adaptation The Man Who Fell To Earth (reviewed here) and, although the films are as different as chalk and cheese, the otherworldliness of the central characters and the way they are depicted without any judgements made by the roving “camera eye” is certainly something which the two films have in common. Under The Skin would certainly go well as the second part of a double feature with Roeg’s classic, for sure.

At times inscrutable, at times simplistic but always emotionally engaging, Under The Skin is probably one of the better films you’ll see in a cinema environment this year... so if you are a lover of the art form of film then it would probably not be something you’d consider missing. Certainly, in my case, it’ll probably lead to harder things... like multiple viewings and reading the original novel by Michel Faber. So catch this one if you can.
Posted by NUTS4R2 at 19:33