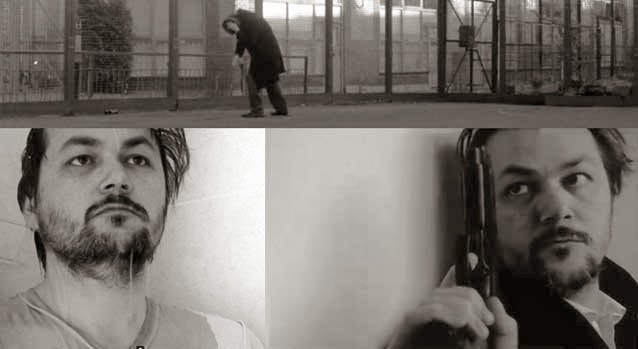 When actor/director James Devereaux asked me to look at Rouzbeh Rashidi’s latest film, I hadn’t twigged it was directed by the both of them. Of course, I’ve reviewed work by both of these directors before and, sometimes, Devereaux stars in Rashidi’s movies... but I didn’t wake up to the collaborative nature of the project until after I’d seen it. I saw the fingerprints of both these artists within the film, of course, but it’s taken me this long to figure out that they are both moving in similar directions in the way they make their art, at the moment, and so I’m guessing that’s why their mutual alliance felt more focussed to me in its intent than I would expect from certain other cinematic partnerships over the years.

The film is presented in black and white and opens with a bearded Devereaux, the only character in the entire film, looking around him. As can be expected with an actor of Devereaux’s calibre, the performance, mostly improvised, is something that is always watchable and interesting. The aspect ratio is similar to that you would get from a mobile phone, which then expands to a wider ratio to see Devereaux in context and interacting with his environment, before switching back to the previous ratio.

In fact, the aspect ratio keeps switching it's location within the bounding frame (composed of white space) throughout the course of the movie.

The shapes used within the space, within the frame, are not to indicate different narrative or chronological points in the story (story is not necessarily what you would call a present element in a film made by either of these directors, to be honest). I suspect, they’re more presented that way to challenge one’s notions of a static ratio as the best way to frame a shot when a different one would specifically serve a different shot. A way of freeing the cinematic space and the constant switching between various planes of that space, very quickly trains the audience to adapt to this kind of acceptance of the art on its own terms.

We also, of course, get into multiple, smaller ratios showing different aspects of the same character in the same space and, because we're already used to the changing visual interface, by this point, we accept this in a less jarring and intrusive manner than we might if, say, it was someone like Brian DePalma suddenly switching to a split screen mode.

Later on, when Devereaux is clearly distressed, his mind in chaos, the ratio is tilted within the overall binding white space of the film frame to further enhance the jangled internal communication of the character within certain shots. The directors experiment with different ways of showing this kind of expression of being bound by the space. For instance, at one point, the ratio of the frame is opened out but Devereaux's head is jammed at the corner intersection of three walls within the bottom right hand corner of the screen. This instantly creates a dialogue between the space captured within the camera as an expression of the boundaries of both the physical form and the human spirit… and the way the stock itself, be it actual film stock or digital pixels, can be retooled to fit a similar embodiment of the same goals and tests the effectiveness and limits of each one as a set of co-existing, artistic techniques. To further push this exploration, the directors even use a strobing effect at one point.

Another key thing to that approach, of course, whether it’s an intentional construct or a serendipitous momentum created by the realisation of the art itself, is that you have the human body as an extension of the mind, exploring the limits of its physical space but, also, within an arena wherein the director (as God) controls the limits of that exploration at a place where the unaware and unnamed protagonist in a film can't know how he (or she) is being manipulated within their alternate reality.

Asides from the dialogue between the way space is used both internally and externally to the content of a shot, there are some really nice moments in the film which make it all worth the watch.

For instance, the contradiction inherent in Devereaux’s stern faced contemplation of his situation (whatever that actually is) and the external expression of the seriousness of his intent...  pitched against the absurdist action of taking a fully clothed shower while drinking a cup of tea. That’s a pretty nice moment right there.

His character, with a gammy leg, dragging himself up a hill just to have a quick look around, then coming down again, is probably a metaphor for something I'm not smart enough to pick up on but it did remind me of Greek tragedy somewhat, and the concept of a daily struggle, perhaps by way of Philip K. Dick's concept of the pseudo-religion of Mercerism in the novel Do Androids Dream Of Electric Sheep? It seems to be, intentionally or not, a visual representation of a certain human attitude, or perhaps need or drive, which is a basic subconscious component of our species.

The struggle between the tortured mind, the physical confinement of such  and the sacrifice involved within such struggle, seems to be a constant concern of the movie, in fact.

What you have here, as you let the images wash over you, is a definite sense of fragments of a central narrative in a simultaneously existing before/after state. The gun, the limp which appears and disappears from shot to shot can be seen, if you choose to read the images this way, as two states on either side of a central event. Once again, Rashidi and Devereaux are inviting us to bring our own, unique narrative element to the film. For me this was a haunted, recovery period of a hit man after something went wrong on a job, followed by preparation for the next job… or is it the other way around. Of course, the beauty of these kind of visual stimulations is that everybody is going to see their own thing within it… which pushes and supports an idea I've had for a while, actually, that people's reaction to a movie is based purely on their own personal baggage that they bring to the experience with them, and how well that same personal agenda is reflected back at them. The almost inevitable refusal to show the actual event which creates the material for this structure is, I think, typical of the work of both these directors.

And all this is judiciously, but effectively, spotted with Alfred Schnittke’s Concerto Grosso n.1, per due violino, clavicembalo, pianoforte preparato e orchestra d'archi... the music used in a more traditional way to create emotion and unease at certain moments in the film and add a certain weight to some of the sequences. It’s been a couple of decades, at least, since I last listened to this composer’s work so I’m pleased to be reminded of him and I really ought to catch up with his work again sometime soon.

Devereaux’s own blog about the way this film was made can be found here and I’d say it’s well worth a read and, obviously, well worth a watch if you’re into the art of making movies. You can follow both directors on twitter on the links given below and, if you give them a shout, maybe they’ll give you a link to the movie for a free watch.