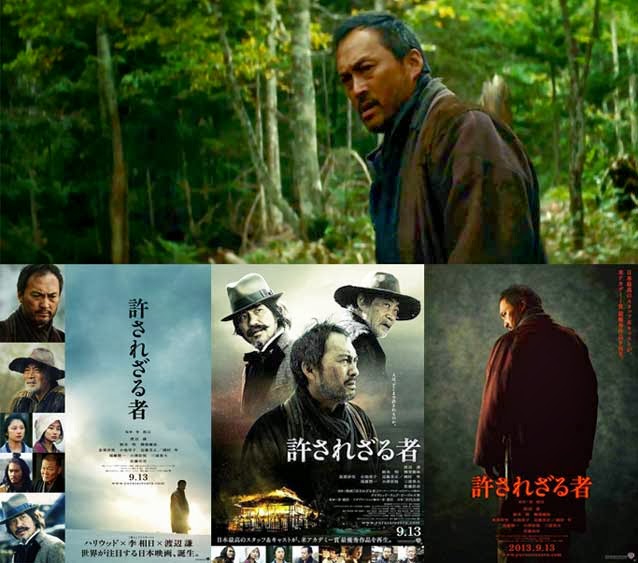 Yurusarezaru Mono is a new Japanese samurai remake of Clint Eastwood’s film Unforgiven. I should probably warn you of the fact that the IMDB is reminding me that it’s 22 years since I last saw that film at my local cinema... Cinema: now deceased. Reviewer: Not quite deceased yet.

Bearing in mind I saw the film only once, I’m remembering that I thought it was an okay film but not enough to ever bother watching again. As such, I really can’t remember much of anything about it so, if you’re after a review which can compare and contrast this new version to the original, then you might want to go and read somebody else’s review with that specific agenda instead.

Now then, the fact that this is a chambara remake of a gritty American Western, which in itself was a throwback, in some ways, to the old revisionist Westerns by the likes of director Sam Pekinpah, is a bit of a twist. Usually it’s the other way around, isn’t it?

Well, yes and no, to be honest... in fairly equal measures.

Let me take the example of Akira Kurosawa because, quite apart from him being my favourite director, some of his films have quite famously been remade as Westerns... and also because some of his work seems to be directly referenced in Yurusarezaru Mono... but I’ll get to that part later.

Three of Kurosawa’s chambara were famously remade as Westerns. The Italian giant Sergio Leone remade Kurosawa’s Yojimbo as A Fistful Of Dollars (which hugely helped establish Clint Eastwood as a movie star and helped him make the crossover from television) and two American directors remade Rashomon (as The Outrage) and Seven Samurai (as The Magnificent Seven)... so there is an established and easily recognisable legacy of period samurai and ronin movies being recast into an “old West” setting (in fact, Yojimbo was also later remade again, as a 1930s gangster movie starring Bruce Willis in the role originally played by Toshiro Mifune and then Clint Eastwood, in a film called Last Man Standing). However, you might want to ask yourself just why these films, especially those of Kurosawa, have been picked on as source material in this manner.

Well, one reason may be the similarity in the village/wilderness setting and the commonality of the archetypal hero/outsider who travels to a place, fixes things and then leaves it behind as he/she goes on to the next port of call... or dies trying. That’s one thing these two genres have in common, to a certain extent. But let me get back to Kurosawa for a minute...

To the Japanese people, certainly in the 1950s and 1960s at any rate, after the global recognition bestowed on Rashomon at various film festivals including, famously, the Golden Lion at the Venice Film Festival... Kurosawa was always looked on as a bit of an outsider. In his own country, his films were perceived as having a very Western flavour to them (in the sense of not seeming like they were a product of the East). This attitude was best summed up by one of his friends, Donald Ritchie, who I was lucky to catch as part of an all day Kurosawa seminar event at least a decade or so ago at the National Film Theatre. He basically said that this attitude from Kurosawa’s Japanese audience seemed to stem purely from the point of view that Rashomon, and much of his later work, was such a success worldwide. The Japanese had always thought of themselves as inscrutable and incomprehensible to the Western mind, and were proud of that part of their worldwide reputation. The fact that Kurosawa was acclaimed on a global scale meant, to them, that he must be directing his films in a way which was compatible to the tastes of Western audiences and, therefore, not truly Japanese.

Which is kind of a load of hogwash when you think about it. All directors are influenced by the huge range of films they have seen from all kinds of countries and the Japanese, including Kurosawa, were no exception. This is as it should be with an artist.

Now indulge me for a minute while I get back to Kurosawa again because it is, I promise, relevant to the film in question... somewhat.

Kurosawa was a life long fan of the famous Western director John Ford. When they met once, Ford said to Kurosawa of his films... “You really like rain.” The two got on famously and, from what I understand, Kurosawa even started to dress like Ford did on set after this meeting. So the point I’m trying to make here is that all directors are equal in their multi-cultural influences and, though it’s not been done that often in reverse (at least not being identified as such... I’m sure a lot of Japanese films may have been influenced by things such as the classic Hollywood Western), the fact that we have a samurai film which is a remake of a 1990s Hollywood Western, especially one which was originally directed by and starring Clint Eastwood, really shouldn’t be a surprise and certainly not an issue. So now I’ve spent all that time pointing out that there’s nothing new here... let’s just forget about that for a while, yeah?

Yurusarezaru Mono is quite spectacular in its execution. It’s a small story of a group of prostitutes who want revenge on the two men who cut up their colleague and who are blocked on the reward they are offering by the local “sheriff” who has his own agenda. This includes beating up and making an example of anyone who wanders into his village to try to make good on claiming that reward and killing the two men who he let go.

Ken Watanabe plays Jubei, the Eastwood character who is pulled out of retirement to kill the two men and claim the reward by an old war buddy. He is backed up by some fantastic character actors who I know I’ve seen many times before... but I have no idea who they are because the IMDB, appallingly, rarely puts photo avatars next to the names of actors and actresses unless they’re English, American or “extremely famous”. But everyone in this is absolutely excellent and, although it’s a small story, it’s a visual treat which, coupled with the excellent acting and sense of drama, maintains a certain pace that ensures you are not going to be getting tired of any of the on screen antics while it’s playing out.

Now, it doesn’t contain a great deal of action in terms of spectacular swordplay, which many of the chambara lionised by Western audiences tend to display, with the few action scenes in this one being much more up close and personal than you might expect from this kind of cinema. And also, there’s a strong emphasis on gunplay too, which goes hand in hand with the use of swords and daggers (this is set early on in the Meji period in Japan) but this, also, is something of a tradition in this kind of cinema and, although the gun play is pushed a lot more forward into the mix, this movie is definitely an Eastern, as opposed to a Western.

Two scenes echo famous scenes by Kurosawa... the first being the introduction of a character who accompanies Ken Watanabe’s character Jubei and his friend (depending on which translation you are reading of the names). An introduction which mirrors the boisterous and drunken antics of Toshiro Mifune’s character in Seven Samurai to a great extent (and later Horst Buchholz in The Magnificent Seven). The character is even from a certain clan/race of people who are seen as primitive and out of step with the other protagonists in the film... just like the alienated Mifune character was in Kurosawa’s classic.

The other big reference to Kurosawa goes back to the weaponry used in this one. In Yojimbo, much is made by Tatsuya Nakadai’s character Unosuke about the bullet being faster than the sword. It’s all about the contrast and the battle between the new age of weaponry pitted against the “old guard”, represented in Yurusarezaru Mono by Jubei and his war buddy but, more specifically in this instance, by a bounty hunter who is used in the first half of the film to demonstrate the deadly ruthlessness of the main antagonist. This is good stuff but definitely a nod to classic Kurosawa... which is nice actually and not something which would have come up in the original 1992 version of Unforgiven.

Like most films of this type, the character building and dramatic tension is ratcheted up to a resolution expressing itself in a final conflict, where Jubei faces down the villain and a whole roomful of his henchmen on his own (and that’s not a spoiler, honest guv!). I won’t tell you the circumstances leading up to this small scale battle royale, nor the final outcome, but I will say that, as I touched upon earlier, that this is not the spectacular ballet of kinetic violence you would expect from, say, a Zatoichi or Sleepy Eyes Of Death or Lone Wolf and Cub movie... or even a Hanzo The Razor installment. Nor is it the swift and deadly final cut of Kurosawa’s Yojimbo sequel Sanjuro. This is a battle which, like most in this film, is all shot tight in on the main protagonist and which dislocates you by not showing the periphery of his battle, as he hacks and punches his way through it, to any great degree.

Also, the director plays with slowing down and speeding up the action at will, altering and enhancing the sound design as he does this and, although that sounds like it’s a hard line to walk, the director manages to pull off this kind of fight choreography exceptionally well, against all odds, with the result that... although maybe not as pretty to look at, it’s certainly a kind of violent conflict that you, as an audience, feel more in your gut. It’s not my preferred choice, by a long shot, but it’s a perfectly valid artistic direction to take and, as I said, the man in charge manages to really make it work well.

So there you have it. A quite lovely, sometimes gritty film with a surprizingly American style soundtrack which, again against all odds, works unusually well with the on screen action. Most everything about this movie works, to be honest. It’s damn near perfect. Whether you’ll like it or not depends on your appreciation of the conventions of either the chambara or Hollywood Western film genres but, as far as I’m concerned, this ones got everything going for it. Unlike the original movie it’s based on, this one is definitely a film I’ll happily pay a few return visits to in the coming years.