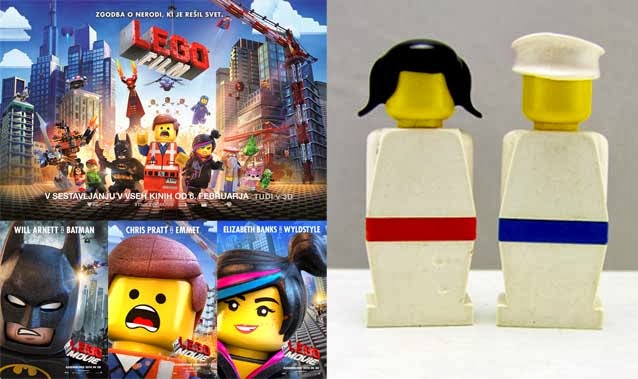 I Get A Brick Outta You

Seems to me Lego has been with me all my life in one way or another.

I remember the really large, oversized bricks we used to play with in infants school... and how I invented a three-brick bomber to cause carnage and drop bombs on the other kid’s creations. I was actively discouraged from exercising my sense of invention in that way by the teachers and very soon learned not to stand out from my fellow classmates in any way which would make anyone think I was in any way special or unique. So after the age of about 4 or 5, I never put my hand up to volunteer for anything ever again... a policy I still practice to this day.

I remember when I was 10 years old, I won a runner up prize in a Lego competition at Selfridges by making a Star Wars X-Wing fighter out of scraps of Lego they had in their tub. Now that might not sound like a bid deal to anyone these days... but back then there was a minimum of themed Lego other than the odd set like “Police Station” or “Fire Station”... certainly no film tie-in stuff. This was just standard Lego bricks ‘n pieces I found in the “communal tub”. Luckily, I was able to score two hinged pieces and so I could at least build a useful X-Wing fighter with “s-foils” which locked into attack position when required... just like in the movie I’d seen at the cinema at the tail end of the year before (1977). I remember going to the prize ceremony at the Grovesnor Hotel for ice cream and the presentation of my runner-up prize... um... a Lego set.

I remember when I built the lego set I got as a prize back then. It had one of the “first wave” minifigures as part of the set and, if you weren’t around in the time of early 1970s Lego, then you probably have no idea what I’m talking about. These were not the “really old” minifigures like the Spaceman you see in The Lego Movie. These things pre-dated even those and were first brought out in 1975. Although they had the same basic head design, there were no features painted on them (they were just blank... kids in those days actually were allowed to have imaginations, if I recall correctly) and they were just static figures made out of bricks... no movable arms or legs on them. In fact, no arms or legs of any description, actually.

Flash forward to the middle of the last decade and Lego re-entered my life in a new and, strangely, quite special way. I had a girlfriend but she lived a fair distance away, in Ipswich. I used to go down there weekends and the way we connected, when we finally discovered it, was to get a couple of controllers hooked up to her Playstation 2 and play the heck out of the Lego Star Wars and Lego Indiana Jones games. Those games were, and still are, the best platform oriented games ever made... I still play the Lego Star Wars, now it’s been released on the iphone (at the tail end of last year). Girlfriends come and go but the Lego games remained something I’ll always love.

One of the good things about the Lego games was always the humour of the cut scenes. The silent pantomime parodies of famous movie scenes with a whacky twist. I guess a lot of people felt the same and so here we have a movie which caters for the people who like that kind of humour... almost.

You see, the thing I always liked about those Lego cut scenes was their lack of dialogue... it brought you back into a realm of silent cinema. Well, the games have dumbed down a little since then. They’ve put voices into the mix and this is the tactic which they’ve taken with the movie. It’s an easier tactic to follow I guess... it’s harder to come up with something fun without words and, I have to say that, for the most part, The Lego Movie succeeds pretty well in at least being fun.

It starts out with a plot where the main villain of the piece is doomed by a prophecy of the “special” person who will someday find the “piece de resistance” and scotch his plans for world domination which, at the point we arrive at in the movie, culminates with the “Krazy Gluing” of all the Lego worlds into one fixed position as the overall “evil plan”. The film tackles the not so strange idea of people, in this case Lego people, brainwashed and controlled by their governments and constantly distracted by just the “correct” versions of the ruling power’s favourite “bread and circuses”. If this concept sounds familiar, by the way, it’s because that’s the way pretty much everyone of us is forced to live our lives... but that’s a different conversation for a different time.

The film is full of humour and, more importantly, chock full of ideas involving construction and the way the “builder” analogy is applied to various aspects of everyday life and popular culture, including the more surreal flights of fancy and “go anywhere in your head” kind of attitude which I personally can only ever approve of in, pretty much, most all walks of life. However, there’s a point when the neat, self sealed world of, um, Legoland, kinda dies a little for me in the movie... when the film decides to enter the real world of humans and justify why all this would be happening from the viewpoint of real people. And there, in the last 20 mins or so of the movie, is where I think the film loses its edge and starts to feel flat. I can understand that there could be a rich vein of exploration in terms of the outside world and the way the human spirit enables the imagination, but I think in the modern, or should that be post-modern, cinema scene, this kind of almost sugar coated justification is no longer necessary. I think the inner world set up within the picture is enough to highlight the spirit of the human imagination in itself. What with the film being made by, you know, real people and all.

So yeah, the last sequences of this film kinda dulled the edge of the execution of the concept for me, but this didn’t stop the rest of the movie being fun and, like I’ve said a few times before, sometimes the journey is worth it even if the end goal is not always attainable. The effects work, which obviously makes up the bulk of the movie, is all fantastic and the story moves along quite a lot. Batman is in it a fair bit but you also get a fair few cameos from characters in other franchises, including a little sequence where Dumbledore from the Harry Potter films and Gandalf from Lord Of The Rings get into a little verbal disagreement... which made me chuckle and wish I’d brought my dad along.

All in all, despite the unnecessary contextualisation of the play area of the story of the movie, the film works well. It’s not one I could see myself watching again, in all honesty, but it’s certainly an entertaining time at the cinema and the kids will most likely love it.
Posted by NUTS4R2 at 12:22